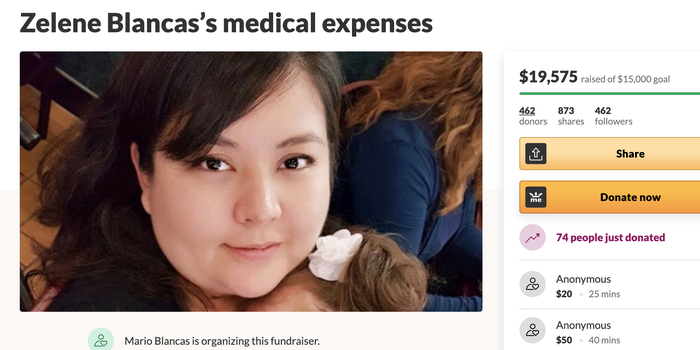 A 35-year-old first-grade teacher in El Paso, Texas, died of COVID-19 on Monday after battling the disease for more than two months, local media outlets KTSM and the El Paso Times first reported.

Zelene Blancas spent nine weeks in a COVID-19 Intensive Care Unit (ICU) prior to her death this week, Nick Adkins, founder of Pinksocks Life, a nonprofit focused on promoting human connection and supporting other charitable organizations, partially through the spreading of pink socks with mustaches on them, told the outlet.

The GoFundMe has so far raised more than $19,000 as of Wednesday afternoon. According to the fundraiser, created by her family, Blancas was diagnosed with COVID-19 on October 20, despite taking precautions, and was hospitalized just four days later. The fundraiser described Blancas as a "beloved daughter, sister, and aunt" and a "dedicated teacher with 10 years of experience."

Blancas, a bilingual educator at the Dr. Sue A. Shook Elementary School in El Paso, had even once gone viral in 2018 for a wholesome video that showed how she was teaching her students to be kind to one another. In the two-year-old video, which Blancas shared to Twitter at the time, her young students were seen excitedly embracing each other with hugs, handshakes, or high-fives as they exited the classroom.

The video has been liked more than 83,000 times since she uploaded it. It depicted a new initiative Blancas' school had taken on at the time, which aimed to educated students on how to handle their emotions, according to a report from the El Paso Times following the viral video that year.

"Ms. Blancas was a dedicated teacher who loved her students and provided a positive, loving environment for them. She had a light that shined from within and was a positive influence on all those around her," Blancas' colleague, Patty Flores, told The El Paso Times.

More than 340,000 people in the US have died from COVID-19 this year, according to data analyzed by Johns Hopkins University.

END_OF_DOCUMENT_TOKEN_TO_BE_REPLACED

END_OF_DOCUMENT_TOKEN_TO_BE_REPLACED
Recent Posts
We and our partners use cookies on this site to improve our service, perform analytics, personalize advertising, measure advertising performance, and remember website preferences.Ok