Spencer Elden may very well be the most famous naked baby the world has ever seen.

A photo of him as an infant – submerged in water and seemingly chasing a dollar bill dangling from a fish hook – became the iconic cover of Nirvana’s 1991 release Nevermind, considered one of the greatest rock albums of all time. 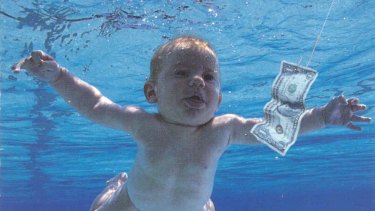 The cover of Nirvana’s 1991 album Nevermind featuring Spencer Elden as an infant.

Elden, who is now 30, on Tuesday filed a lawsuit in a Los Angeles federal court against a host of defendants tied to the album, alleging the cover is “sexual exploitation” that will hurt him – emotionally and physically – for the rest of his life.

Those defendants include Nirvana LLC, several of its members, the estate of the band’s late frontman Kurt Cobain, the designer and photographer involved in creating the cover, and the record label that released the album. None of them responded to emails sent from The Washington Post.

The suit alleges that all were involved in making child pornography and benefited from “the sex-trafficking venture and Spencer’s exploitation” that was the distribution of Nevermind.

Elden’s legal guardians did not sign a release authorising Nirvana or the band’s record label to use the image of Elden “and certainly not of commercial child pornography”, the suit claims. Elden said he had never received any financial compensation for the cover, which Billboard last year ranked No. 7 on its list of “The 50 Greatest Album Covers of All Time.”

Cobain’s original idea for the cover of Nevermind was a baby being born underwater, but designer Robert Fisher nixed the idea as not possible, according to an undated article written for Milanote, a company that offers an online organisation tool.

While ruling out much of Cobain’s idea, Fisher kept the germ of having a baby underwater. 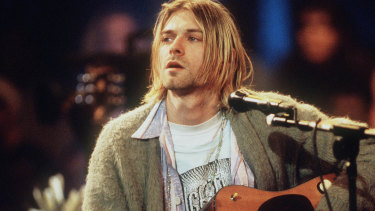 “So Kurt came up with the idea of adding a fishhook to make it more menacing,” Fisher said for the Milanote article, which Elden cites in his lawsuit.

Concept in hand, they hired photographer Kirk Weddle to execute their vision. Weddle then recruited about five parents to bring their infants to an aquatic centre in Pasadena, California, according to Milanote, where they took turns passing their babies under the water as Weddle took pictures.

Elden’s dad, Rick, had become friends with Weddle when he was helping with sets and props on photo shoots. One day, Weddle telephoned with an unusual request concerning his four-month-old son.

“[He] calls us up and was like, ‘Hey Rick, [want to] make 200 bucks and throw your kid in the drink?’” Rick Elden told NPR at the time. “And we just had a big party at the pool, and no one had any idea what was going on!”

A week later, Fisher received the proof sheets of 40 to 50 shots. One stood out far above the rest: It was Elden.

The lawsuit filed Tuesday paints a darker picture, identifying Nirvana’s frontman as the one who made the decision.

“Cobain chose the image depicting Spencer – like a sex worker – grabbing for a dollar bill that is positioned dangling from a fishhook in front of his nude body,” the suit alleges.

Elden has spent decades struggling to come to terms with the fame that has followed him since before he could walk. He has worked with photographers several times over the years to re-create the album cover – all with clothes on. He has Nevermind tattooed across his chest. 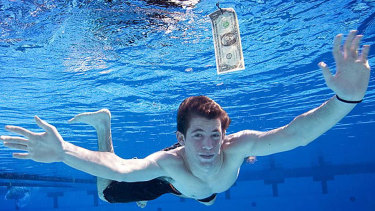 His attitudes about it have changed, too.

Over the next eight years, his outlook soured. In 2016, Elden did several interviews when he was in his mid-20s on the 25th anniversary of the Nevermind release where he described being angry about something he had no control over and he felt “stupid doing interviews about it, because I had nothing to do with it, but a lot to do with it all at the same time”.

He also said the album cover damaged his relationships with women and having friends talk about the naked photo was embarrassing, especially without any compensation to offset that humiliation.

While Elden has struggled financially, he said, others had and were still making millions off something he helped create – even if he didn’t have a say in what was created.

Elden is seeking at least $150,000 from each of the 15 named defendants in the lawsuit, legal fees and other unspecified damages.

In the GQ article, Elden also addressed an issue more closely tied to the lawsuit he filed Tuesday.

“I’ve been going through it my whole life. But recently I’ve been thinking, ‘What if I wasn’t OK with my freaking penis being shown to everybody?’ I didn’t really have a choice.”