‘A special relationship’: Australia safe from Trump’s tariffs for now

New York: US President Donald Trump has indicated the US will not impose tariffs on Australian imports despite being urged to do so by senior members of his administration.

The New York Times reported on Sunday night, US time, that some of Trump’s top trade advisers had urged him to introduce tariffs to stop the huge flow of Australian aluminum into the US.

Australia was granted an exemption from steel and aluminium tariffs when Trump introduced them in May last year.

Then prime minister Malcolm Turnbull was heavily involved in negotiations to ensure Australia was not affected by the tariffs. 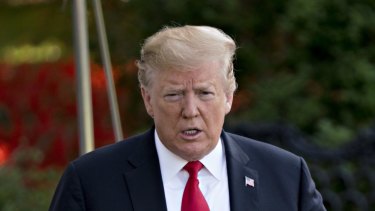 “The Australian situation is interesting,” said Donald Trump. “But the relationship is very strong.”Credit:Andrew Harrer

That exemption has caused Australian aluminium exports to the US to soar, alarming US Trade Representative Robert Lighthizer and Director of Trade and Manufacturing Policy Peter Navarro.

The push to end Australia's exemption to the 10 per cent aluminium tariff was rejected by senior officials at the Defence and State Departments. They argued it would undermine the close US-Australia alliance, The Times reported.

Trump, at least for now, has sided with them.

Asked about the report on his way to the United Kingdom for an official visit, Trump said: "The Australian situation is interesting but the relationship is very strong.

"No, we’re doing a very special relationship with Australia."

"We have an arrangement with the United States and we are working within that arrangement," Morrison said. 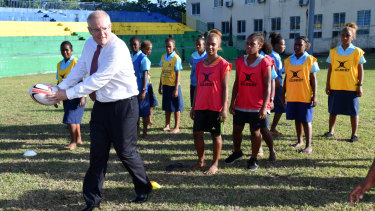 Australia exports about $500 million in steel and aluminium to the US each year.

Even if Australia's exemption remains in place, the fact the tariffs were even considered underscores the increasingly volatile nature of the Australia-US relationship under Trump.

Trump recently said he wanted his Attorney-General to examine Australia’s role in triggering the FBI inquiry into links between Russia and his election campaign examined by US Attorney-General William Barr.

Australian officials have been alarmed by the possibility that confidential documents Australia provided to the US could be made public.

The documents may include those relating to a meeting Australia's then high commissioner to the UK Alexander Downer had with Trump campaign adviser George Papadopoulos at a London wine bar in 2016.

This meeting played a key role in the instigation of an FBI investigation into links between the Trump campaign and Russia when Downer reported back that Papadopoulos told him Russia had obtained damaging information on his rival Hillary Clinton.

Australian diplomats in Washington, led by US ambassador Joe Hockey, have also had to fight hard to ensure Australia retains exclusive access to 10,500 special US work visas a year.

Trump last week threatened to introduce a 5 per cent tariff on imports from Mexico in a bid to stop illegal immigration.

He is also pushing ahead with plans to introduce a 25 per cent tariff on virtually all Chinese imports into the US.