An enraged Airbnb host barged into an LA apartment while a guest was staying and told her to ‘get the f*** out’.

Airbnb guest Kristin Eardley, 39, from Chicago, Illinois, ‘complained about a mouldy sandwich and unemptied bin’, prompting the outburst in April this year.

The ad tech director had booked a two-night stay for April 26-28 at an apartment in Los Angeles, California, via Airbnb for a business trip.

She filmed the moment the apartment host, pilates instructor Ashley Green, burst into the apartment and started a shouting match that left Ms Eardley in tears and without a place to stay.

After reporting the incident to Airbnb the rentals site refunded her the whole cost of the booking. 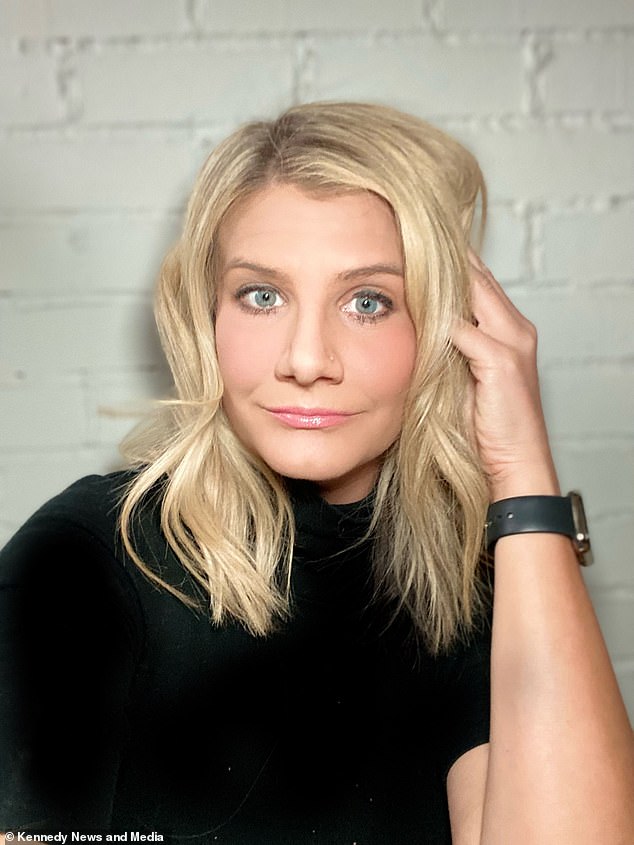 Airbnb guest Kristin Eardley, 39, (pictured) from Chicago, Illinois, ‘complained about a mouldy sandwich and unemptied bin’, prompting the outburst in April this year 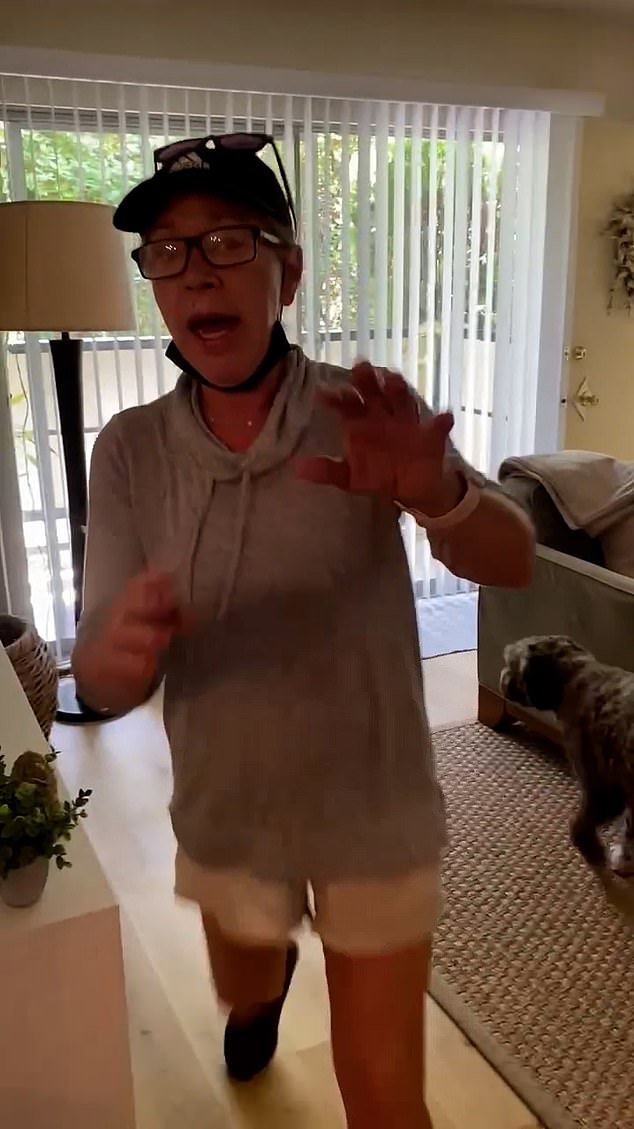 Apartment host, pilates instructor Ashley Green (pictured), burst into the apartment and started a shouting match that left Ms Eardley in tears and without a place to stay 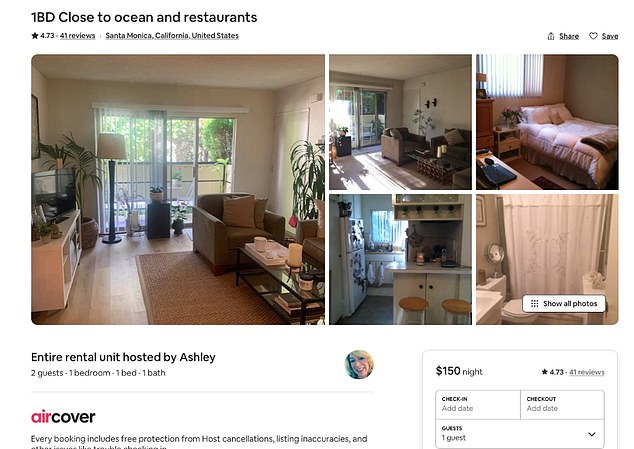 The police were even involved after the host told cops Ms Eardley had stolen $10,000 worth of jewelry, while the guest said her laptop was taken and later found in a dumpster by officers.

In response to the claims the Airbnb host said she was a ‘superstar renter’.

She said: ‘If you look at my reviews they are excellent. I’ve never had a problem. The apartment is immaculate, it looks like a hotel.

‘I started getting all these crazy texts – like dust on a glass from a cupboard she wasn’t even supposed to be in.

‘She went into cupboards that were locked with little straps – she broke them and then wiped her finger and started taking numerous pictures of her finger with dust on. 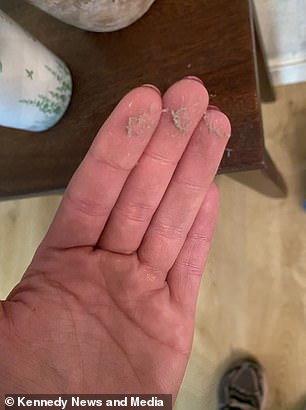 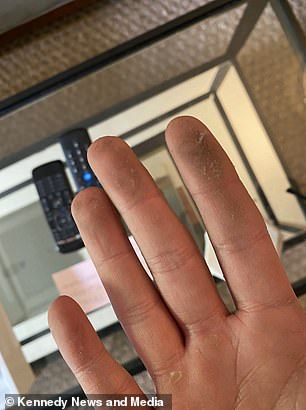 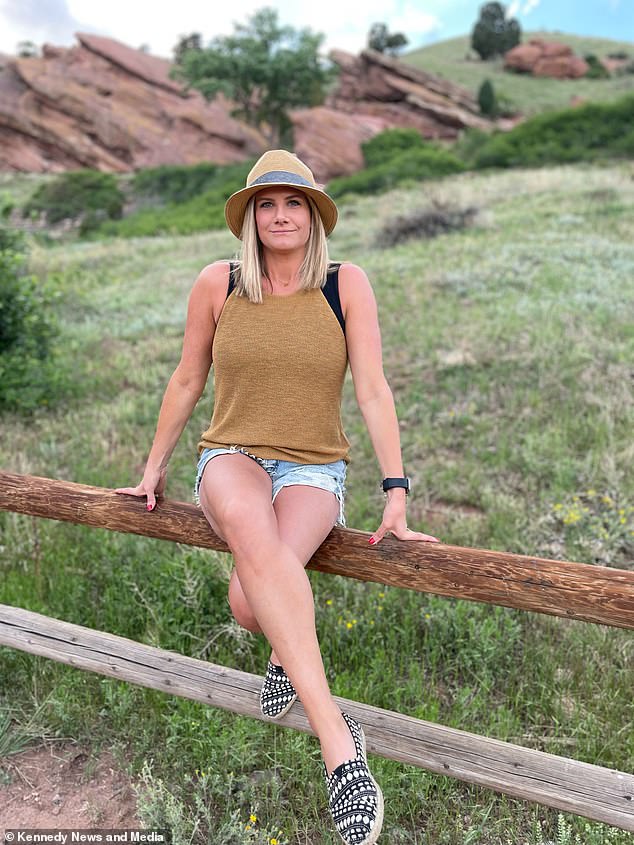 ‘There was a broken glass – my cleaning lady apparently broke a glass and there were tiny little pieces that she didn’t get.

‘She said there was a sandwich with mould on it – that’s not true. I think that my cleaning lady threw her sandwich in the garbage which I had already emptied, just the wrapper, and forgot to bring it out. I don’t think there was mould on it.

‘I called Airbnb and said now I feel uncomfortable with this guest – she’s not only disturbing me but she’s disturbing my neighbours.

‘They said they contacted her and she should be checked out at 11.30am. I walked in at 11.30am and she literally shoved the door in my face. She was telling me she wouldn’t leave.

‘So I opened back the door. I said ‘I want you out, I don’t feel comfortable’.

‘I took her laptop because she literally threw me out of my apartment and locked the door with my phone and car keys in the apartment. I had to call 911.

‘Nobody put anything in a dumpster. I took her laptop so she would get out of the house. I put it right on the side next to my door.

‘Out of probably 60 rentals I’ve only had one bad experience and it was this woman.’ 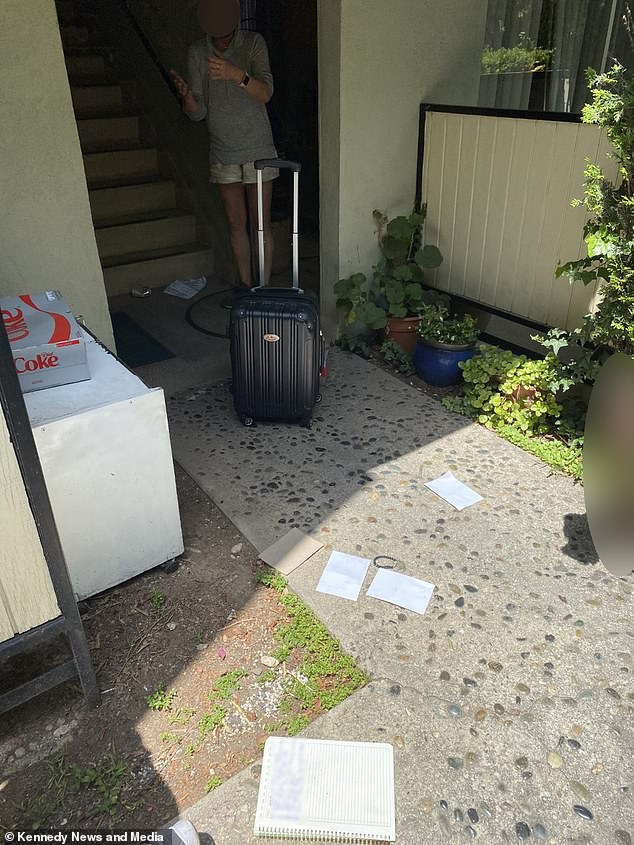 Ms Eardley said she was ‘terrified’ after Ms Green screamed at her.

The host told Ms Eardley to ‘get the f*ck out’ and appeared to shove her.

The furious ad tech director claims that she is still waiting for compensation from Airbnb for the hotel she was forced to book after the host kicked her out, two months after the incident.

The Airbnb host admitted there was broken glass in the property but said she had thrown the woman out because she’d already instructed her to leave for making her feel ‘uncomfortable’.

Ms Eardley said:’I packed up my stuff in under seven minutes and took pictures of the apartment to show how I left it so she couldn’t say I had done anything to the apartment.

‘I opened the door and she continued to scream. I had to be at this event in two hours. I said ‘Where is my laptop? Please give me my laptop, I would like to go’. She said ‘I have no idea what you’re talking about’.

‘After probably five or ten minutes or arguing with her about my laptop I decided to leave and call the police and deal with it with them. I drove to Beverly Hills in tears.’

What are Airbnb’s rules on disputes?

If something goes wrong during your stay:

If an issue comes up, try talking to your Host first. You can message your Host directly from your inbox to let them know what’s going on.

If you need to request a full or partial refund because of the issue, there’s a higher chance your Host will accept your request if you can agree on an amount first.

Gather evidence: If possible, take photos or video to document issues like a missing or broken amenity.

Submit your request: You’ll describe the issue, provide photos or video if you can and let the Host know how you’d like to resolve the issue.

Wait for a response: If your Host declines or doesn’t respond, you can ask Airbnb to step in to help. Airbnb will refer to the Rebooking and Refund Policy to determine what help we can provide.

Though we always want Hosts and guests to work things out directly if they can, we know it’s not always possible. If an issue comes up that you’re not able to resolve with your Host (or your Host declines or doesn’t respond to your refund request), let us know and someone from our team will step in to help.

If we find the issue is protected by AirCover, we’ll get you a full or partial refund or, depending on the circumstances, find you a similar or better place to stay.

Remember that you have 72 hours to report any issue to us from the time of discovery.

The ad tech director booked the one bedroom, one bathroom apartment in Los Angeles as a cheaper alternative to the pricey hotels in the area for her trip to speak on an industry panel.

She says that on the day she was due to arrive at the booking, the host contacted her repeatedly and gave her a different address to the one listed on Airbnb – two doors down.

She claims the host explained that she preferred not to give out the real address on the app for her own safety.

After complaining to Airbnb about this and requesting a refund for the $125 cleaning fee, she expressed her dissatisfaction with her stay so far to the host.

‘I noticed [the apartment] clearly hadn’t been cleaned, it was really dusty and the trash hadn’t been emptied – that’s where I found the broken wine glass and a mouldy sandwich.

After the explosive altercation, the host reportedly claimed to have no knowledge of where Ms Eardley laptop was – despite being caught on video taking it outside the apartment.

Ms Eardley was then forced to leave without it and reported it to the police as a theft.

She claims an officer informed her that they were already on their way to the woman’s address as the host had called and accused her of stealing $10,000 worth of jewellery from the apartment.

Ms Eardley agreed to return to LA to talk to police after her work event, where she says they

She was reunited with h her laptop after finding it in a dumpster near the address.

She claims police dropped the host’s complaint about jewellery theft after viewing the video footage, which she says documented that all of the drawers in the apartment were locked and not tampered with.

Airbnb refunded for the total cost of the booking but Ms Eardley said that she is still waiting for the $400 compensation that Airbnb allegedly promised her towards the $660 hotel cost for the night after the host kicked her out.

Ms Eardley said: ‘I’ve been an Airbnb customer for probably ten years now and this is the first really horrible experience I’ve had. It’s honestly been a nightmare.

‘How they’ve handled it is not acceptable.’

She added: ‘This has been one of the worst and most traumatic events that has ever happened to me ever during travel.

‘I’m extremely shaken. It was really scary. I will never use Airbnb again.’

Police confirmed they responded to a call at the address but no arrests were made and no report was taken.

Airbnb said they removed the host from the platform as soon as they were made aware of the incident and said they have a 24-hour safety line so hosts and guests can connect with support agents.

An Airbnb spokesperson said: ‘This type of behaviour goes against everything Airbnb stands for, and we took action as soon as this matter was brought to our attention in April, including removing the Host and providing our support to the guest.

‘The safety of our community is our priority, and while isolated issues on Airbnb are rare, where they do happen, our Community Support team is on hand 24/7 to help.’