Singapore: There is more political chaos in Malaysia, with an unprecedented public rebuke by the king leaving Prime Minister Muhyiddin Yassin in a precarious position.

But while yassin faces new calls to resign, Malaysia’s bid to stare down an even greater crisis is gaining pace and changing shape. 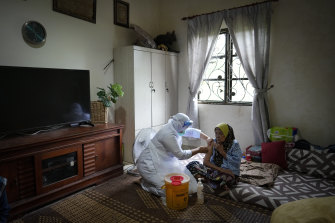 A nurse administers a Pfizer COVID-19 vaccine to an elderly woman in her house in rural Sabab Bernam, central Selangor state,Credit:AP

Confronting one of the worst per capita COVID-19 outbreaks in the world, the south-east Asian nation is flooding its worst-hit region with extra vaccine doses in a targeted surge that has rare support from across rival party lines.

Dr Jemilah­ Mahmood, Muhyiddin’s special adviser on public health, said the concentration of infections in the Klang Valley, an area of 6 million people taking in the capital Kuala Lumpur and the industrialised state of Selangor, had led to a rethink of Malaysia’s vaccine strategy.

“When we started off, it was about vaccine equity. So allowing different states to have an almost equitable amount of vaccines per capita [based on their] population,” she told told The Sydney Morning Herald and The Age.

“But when the outbreak started to get worse in what we call the Klang Valley, we saw that about 70 per cent of the cases were contributed from this area.“

People register at a vaccination centre in Selangor, Malaysia’s most populous state.Credit:Bloomberg

The result is an operation, starting this week, that is directing nearly 100,000 additional doses per day to the country’s commercial centre in an effort to have every registered adult there fully vaccinated by mid-August.

With a majority of the 17,000-plus new daily cases in Malaysia recorded in the Klang Valley, it is on a very different scale to Australia’s most serious outbreak in western Sydney.

But Malaysia has been able to funnel vaccines to the epicentre without the tensions of federalism that have impeded the NSW government’s appeal for more doses to vaccinate Sydney.

Only a minimal number of vaccines have been diverted from other states, as the nation has ramped up its supply. Malaysia’s Science, Technology and Innovation Minister Khairy Jamaluddin, who is in charge of vaccine procurement, was able to renegotiate the country’s deal with Pfizer to have 25 million of the American shots delivered by September.

That has allowed the daily vaccination rate to become one of the fastest in the world, exceeding 500,000 doses administered per day, after a sluggish start.

The Klang Valley surge includes plans to use the single-shot Chinese vaccine CanSino for people such as the homeless and the more than 2 million migrant workers because of difficulty contacting them twice.

Ong Kian Ming, an MP in Selangor who was a deputy minister in the previous Malaysian government led by Mahathir Mohamad, is helping coordinate the vaccine drive in the state despite belonging to the opposition Democratic Action Party.

“To me, this is a no-brainer,” he said. “If the cases in Klang Valley are not under control, then the overall number of cases in the country cannot come down and the economic recovery process cannot begin in earnest.”

Prime Minister Muhyiddin Yassin speaks at a special session of parliament, which resumed this week for the first time since a state of emergency was declared in January.Credit:Malaysia Department of Information

Opposition leader Anwar Ibrahim, however, says speed of vaccination now must not overshadow the failures of Muhyiddin’s government in handling the virus.

“We were late and we were weak,” he said last week of Malaysia’s accessing of vaccines. “We are distributing vaccines but because of carelessness, the number of deaths has increased.“

Anwar was also front and centre of proceedings on Thursday during the extraordinary events that pitted Muhyidden and his government against the country’s monarch, King Sultan Abdullah Ahmad Shah .

For the first time since independence in 1957, the king took aim publicly at the government, saying in a statement his function as head of state had been disregarded by the cancellation of emergency rule laws by the cabinet last week without his consent.

Malaysia has been in a state of emergency since January that critics believe has been used by Muhyiddin to cling to power but it comes to an end on Sunday.

Accusing the leader and his cabinet of violating the constitution and insulting the royal institution, Anwar demanded the prime minister resign as cries of “treason” rang out in the Dewan Rakyat, the lower house of parliament.

But as he sought to challenge Muyhiidin’s majority by filing a motion of no-confidence, the special sitting was suspended as it emerged two parliamentary staffers had the virus.

Mass testing found nine more positives on Friday and with the session not due to resume until Monday, Muhyidden supporters would be busy this weekend trying to ensure he had the numbers, said Professor James Chin, an expert on Malaysian politics at the University of Tasmania.

“My understanding is they’re running around collecting statutory declarations of support for Muhyidden because they are afraid if there’s a confrontation between Muhyidden and the king, Muhyiddin needs to show the king that he has the support of at least 110 MPs,” he said.

The king’s missive raised alarm bells about a potential constitutional crisis but Professor Chin believes his statement may not be supported by all of Malaysia’s eight other state sultans. Malaysia’s kings are elected for five-year terms from within the country’s nine ruling royal families.

“My understanding is the older ones aren’t happy and it was not a consensus statement,” he said.

“Normally, the way is done, if you’re unhappy, you have a quiet word with a prime minister, you order the prime minister to appear before you and then you give him a dressing down in private. This was a very public dressing down. It is also against Malay political culture which is all about saving face.”

Muhyidden has defended his government, saying the king had been told of the law changes and was obligated to follow the cabinet’s advice under the constitution.