Animals that inspired Winnie The Pooh in remarkable WW1 photos

They also served: Cats, rabbits and even the bear that inspired Winnie The Pooh appear in remarkable photos of the 16million animals caught up in World War One

Incredible photographs from World War One show the animals that served in the war and their efforts assisting troops on the front line.

Over 16 million animals served in the First World War and were used for transport, communication and companionship.

During the four-and-a-half years of the First World War it is estimated that 8 million horses, mules and donkeys died, along with 100,000 pigeons.

Meanwhile creatures such as foxes, goats and kangaroos served as mascots for units and were tended to by the troops.

Also featured is the small black bear purchased Canadian Lieutenant Harry D. Colebourn, who he named Winnipeg – shortened to Winnie – after his hometown of Winnipeg, in Manitoba.

Winnie was the inspiration for British author A.A Milne’s beloved stories of Winnie The Pooh.

The incredible photos feature in Tanya and Stephen Wynn’s book Animals in the Great War, a look at the use of animals on both sides of the Great War. 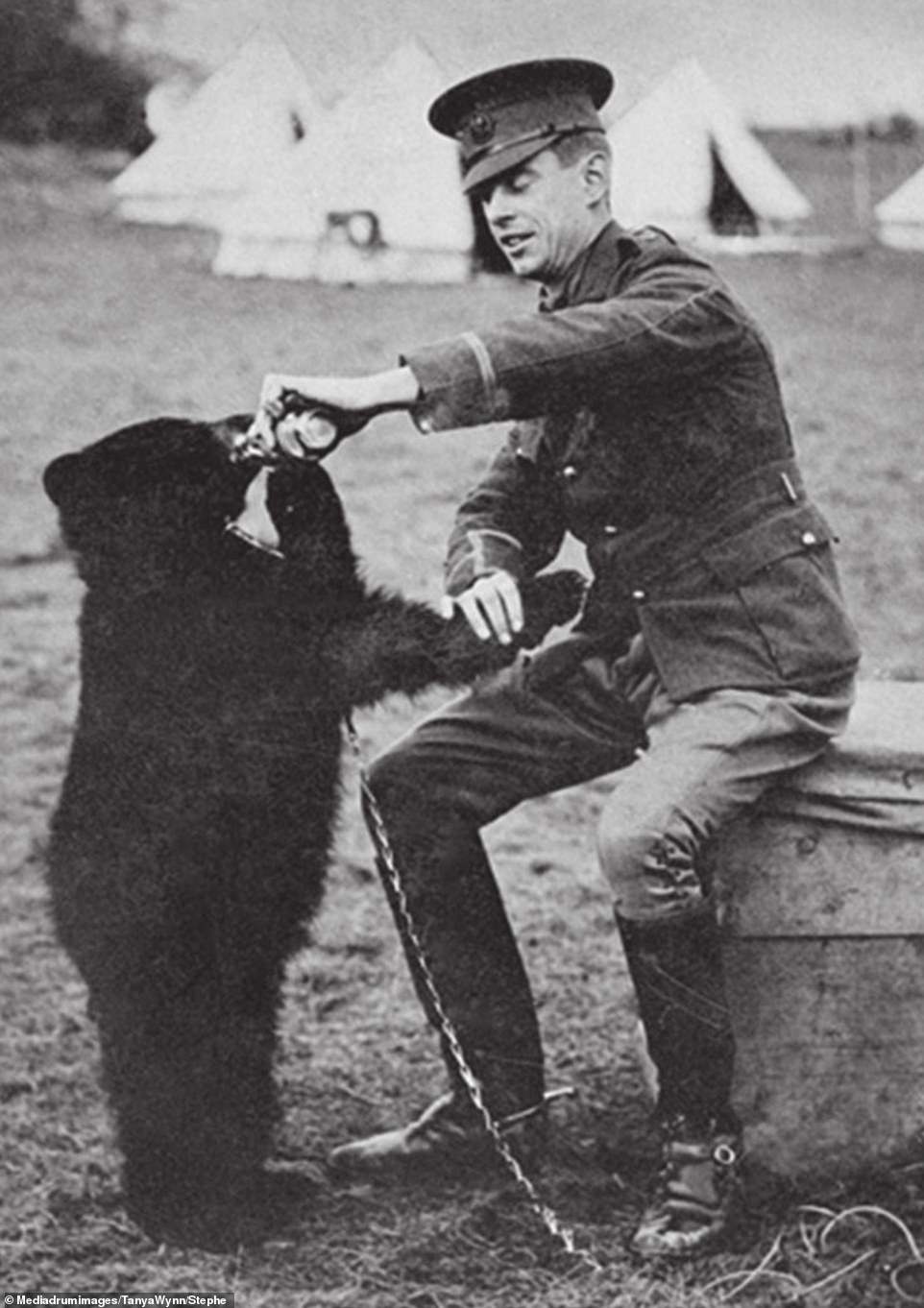 Remarkable photographs from World War One show the animals that served in the war and the effect they had on the front line. One of the animals featured is Lieutenant Harry D. Colebourn’s small black bear he named Winnipeg (pictured) – shortened to Winnie – after his hometown of Winnipeg, Manitoba. Winnie later became the inspiration for the A.A Milne books 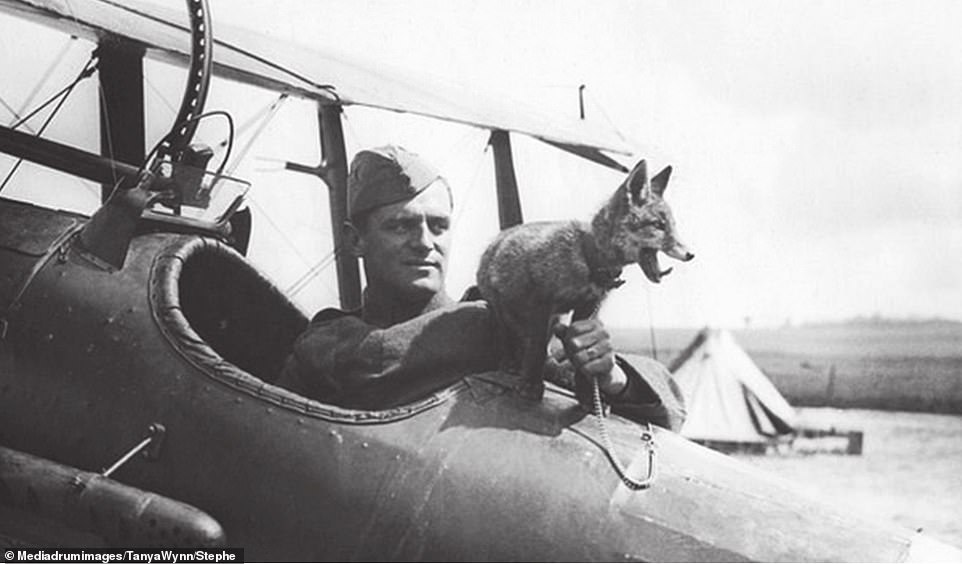 An RAF pilot poses with a pet fox in the cockpit of his aircraft in France. The cub, seen wearing a collar and a lead, became attached to the 2nd Squadron Royal Air Force and was adopted as their mascot. The animal gave his squad both comfort and entertainment during the war 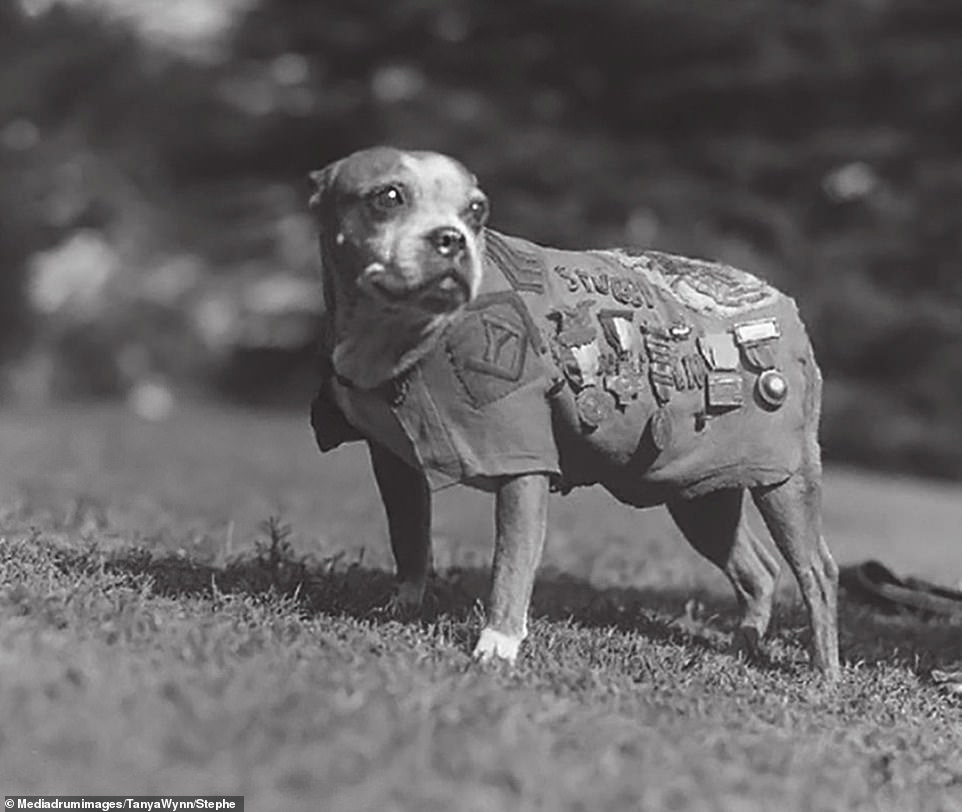 Sergeant Stubby (pictured) was the only dog promoted to the rank of sergeant and highly decorated for his bravery. The Boston bull terrier started as the mascot for the 102nd Infantry, 26thYankee Division, and eventually became a fully-fledged combat dog. An injury during a German gas attack left the pooch acutely sensitive to gas but allowed him to warn soldiers of an impending gas attack, by running about and barking. He also located many wounded soldiers in No Man’s Land 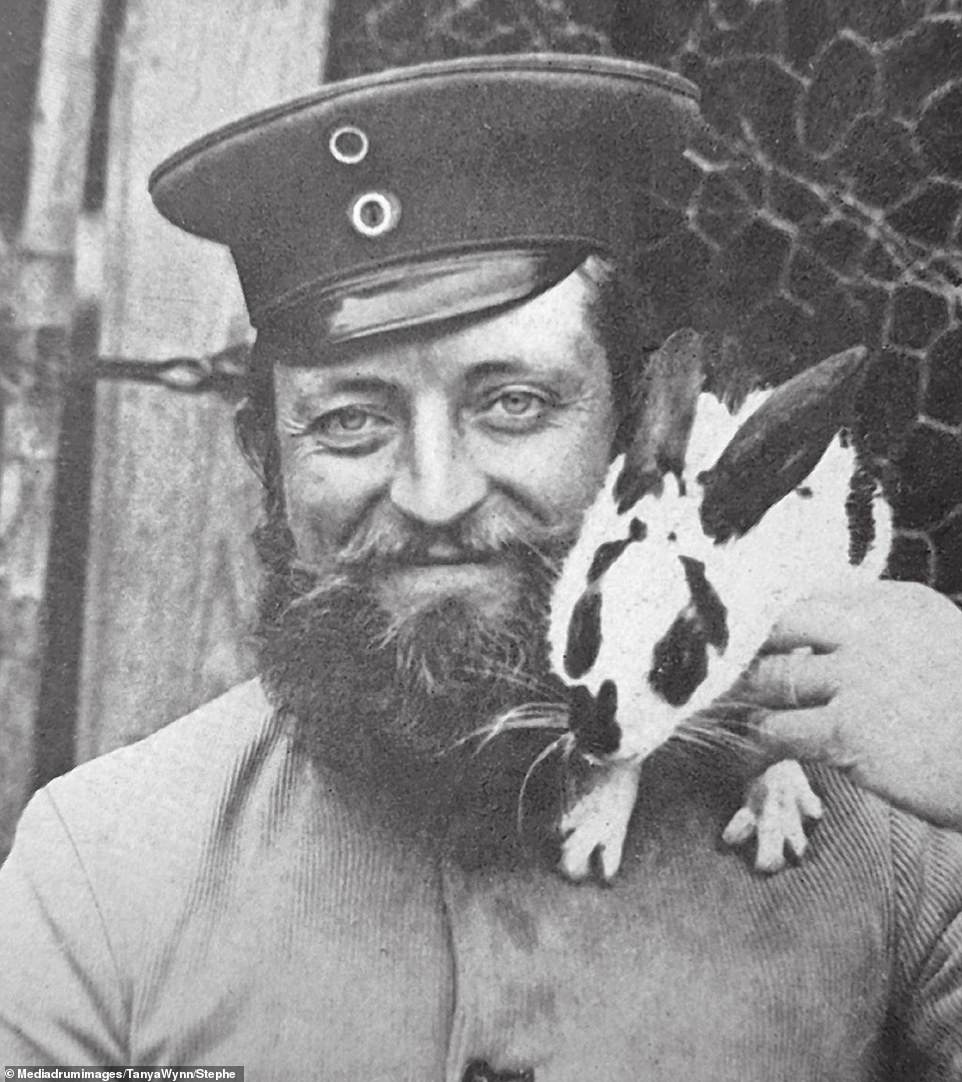 This German POW photographed with his companion, a rabbit, on his shoulder appeared to be in good spirits despite being in a Dorchester camp. 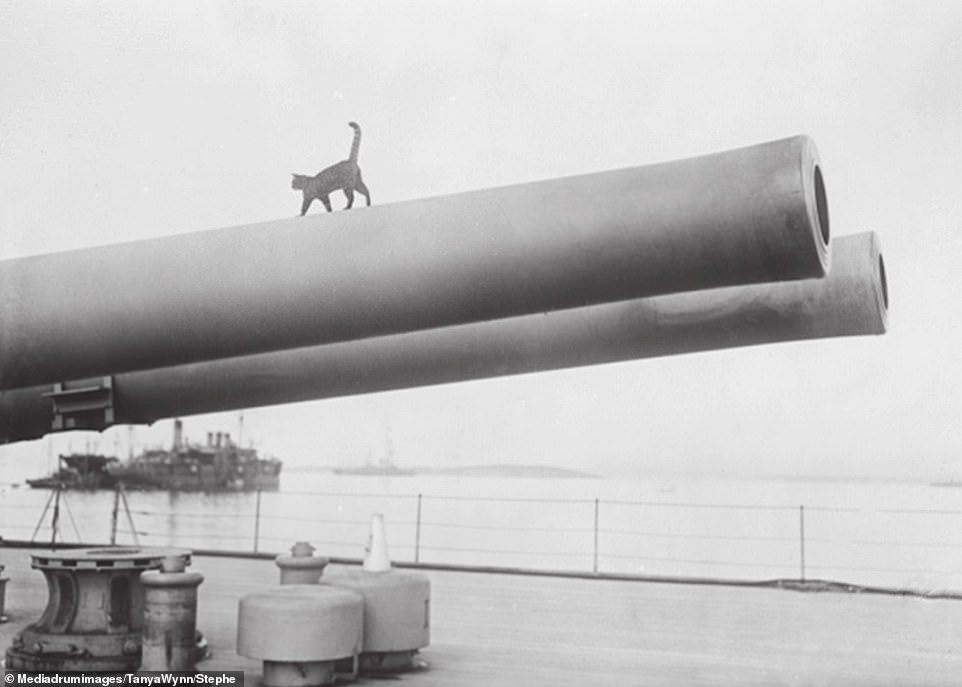 A cat is pictured enjoying a leisurely stroll on the cannon of a ship. Felines were useful for catching vermin onboard all sorts of floating vessels during the war. Cats, as well as dogs, were also trained to hunt rats in the trenches and locate wounded men in No Man’s Land 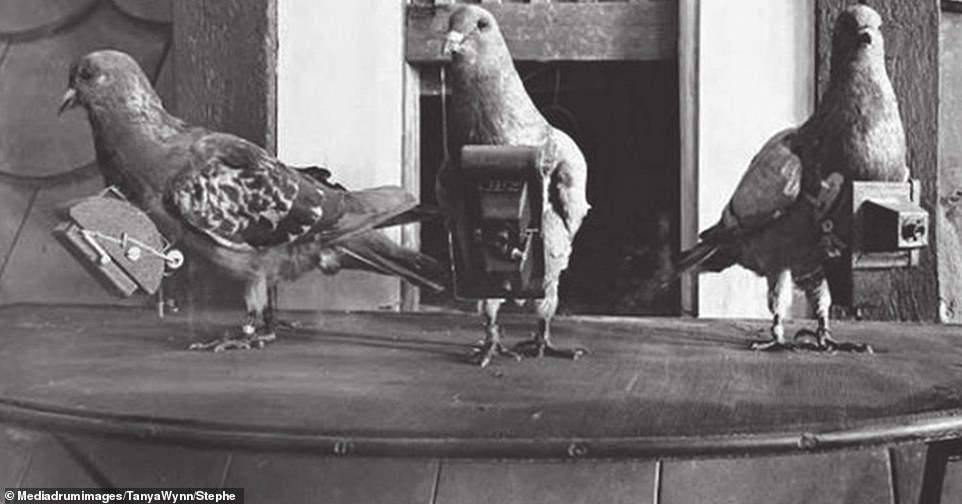 During the war, pigeons had cameras strapped to their chests and were used as spies to do reconnaissance work over enemy lines. Aside from spy work, pigeons were also worked as messengers, rapidly taking notes from the battle field to HQ. Tanya and Stephen Wynn, authors of Animals in the Great War, said that pigeons were also used on board ships 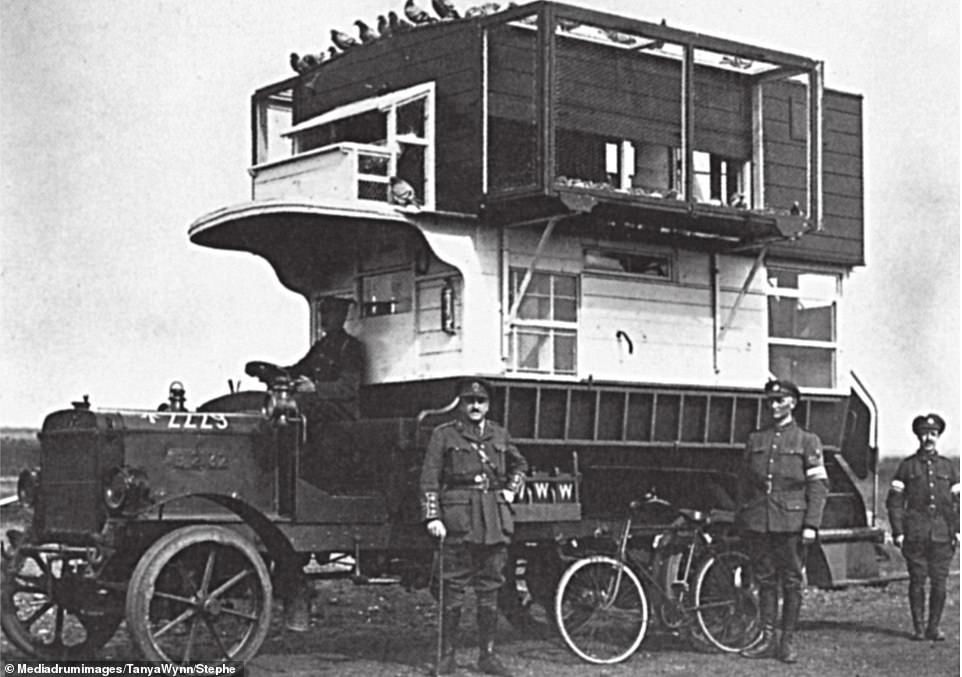 Pigeons on the high seas meant that if a Royal Navy Vessel was under attack meant the crew of a quickly sinking ship might have been to send a messenger pigeon carrying the details of their last position at the time of their sinking, which could mean the difference between life and death for any crew. Pictured is a pigeon loft where the birds would rest after a mission 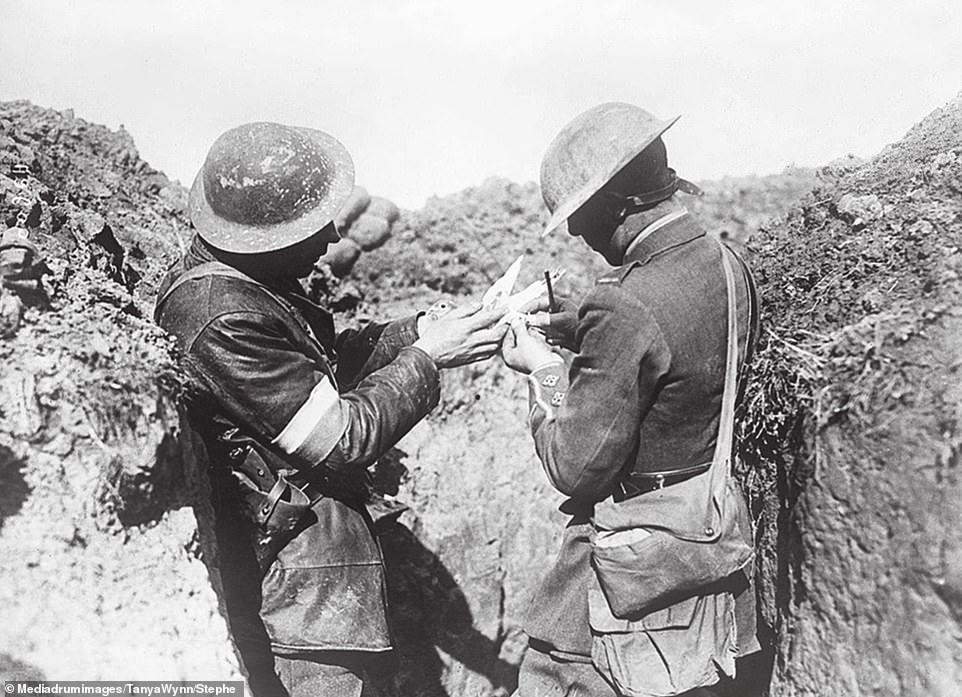 The soldiers pictured on the front line are pictured releasing a message from a pigeons leg. The winged messengers would often be targeted by enemy marksmen as they found their way ‘home’. In the first four years of the war approximately 100,000 pigeons were killed. ‘Pigeons were possibly more widely used than was actually appreciated,’ added Tanya and Stephen Wynn 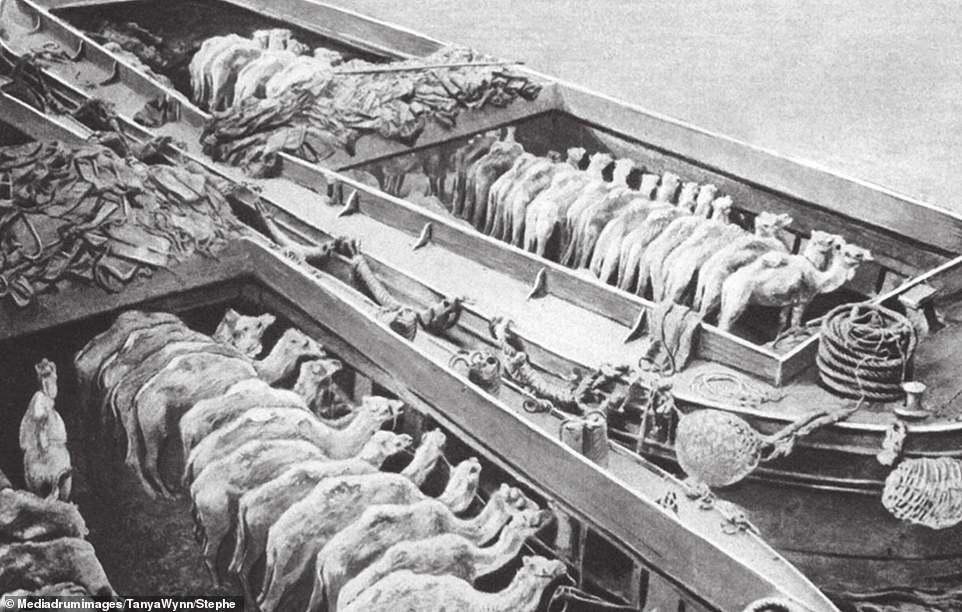 Camels were also used during the war, they carried food, water, ammunition and medical supplies to men on the front line. The imperial camel corps was established in 1916 and operated in the desert war efforts in Middle East and Africa, according to the Imperial War Museum. The corps grew to four battalions with soldiers from British, Australian, New Zealand, as well as troops from Indian, Hong Kong and Singapore 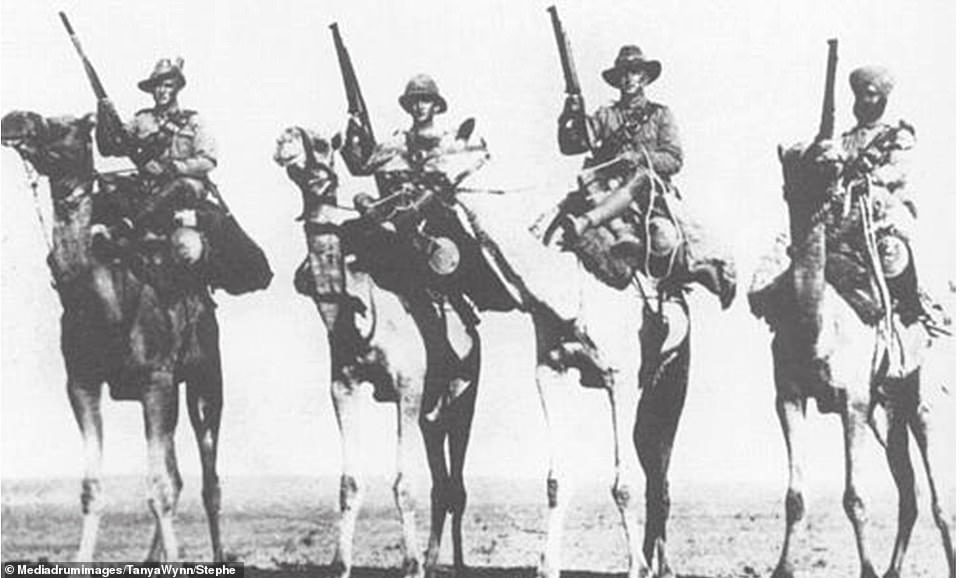 This image shows the Imperial Camel Corps, or cameliers, who used the animal in desert warfare because they were less skittish than horses. But Camels were known to be stubborn creatures who would occasionally cause stampedes or attack people, according to NZhistory.govt 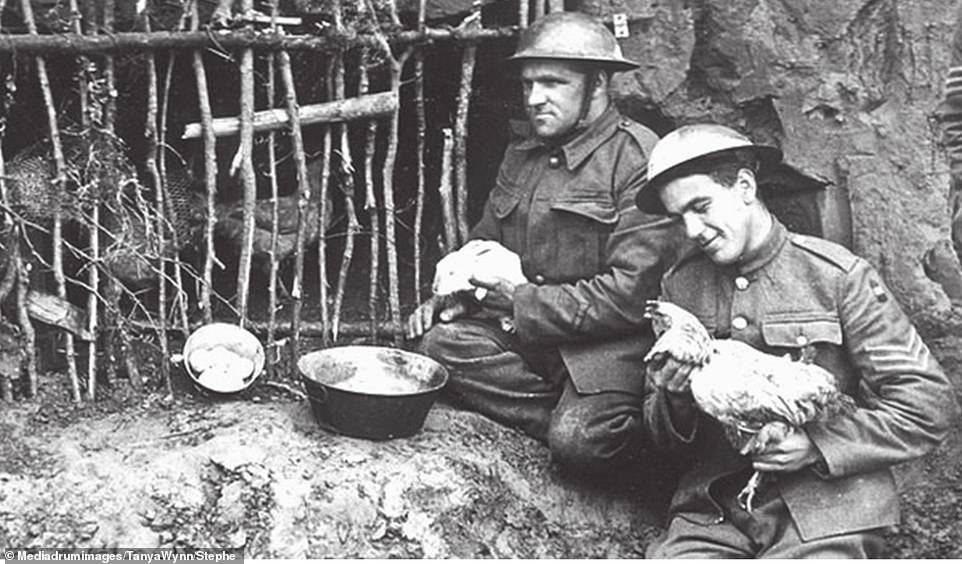 In this image one happy solider pets a chicken. In the background of the image is another chicken behind a makeshift coop, while in front of the stick fencing is a small bowl with a few eggs. The soldier beside him appears unhappy while holding on to a white rabbit in front of a large pot, which he was likely saying goodbye to before cooking for the troops 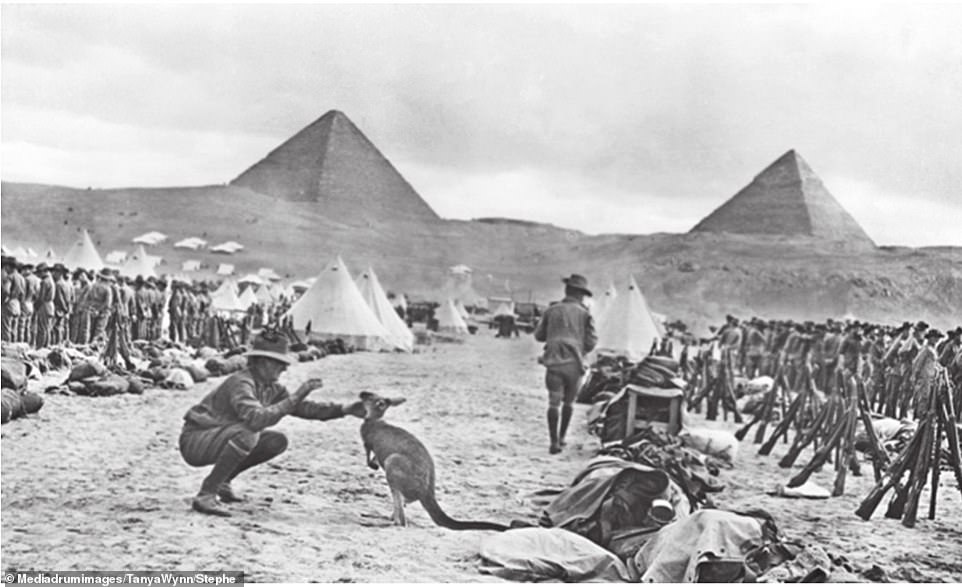 Australian units serving in Egypt (pictured with the Pyramids in the background) took care of their kangaroo who served as a mascot for the troops in the desert. Fortunately for the kangaroo, there would not have been too much difference between the heat of an Egyptian desert and the dry and arid conditions it was used to back home 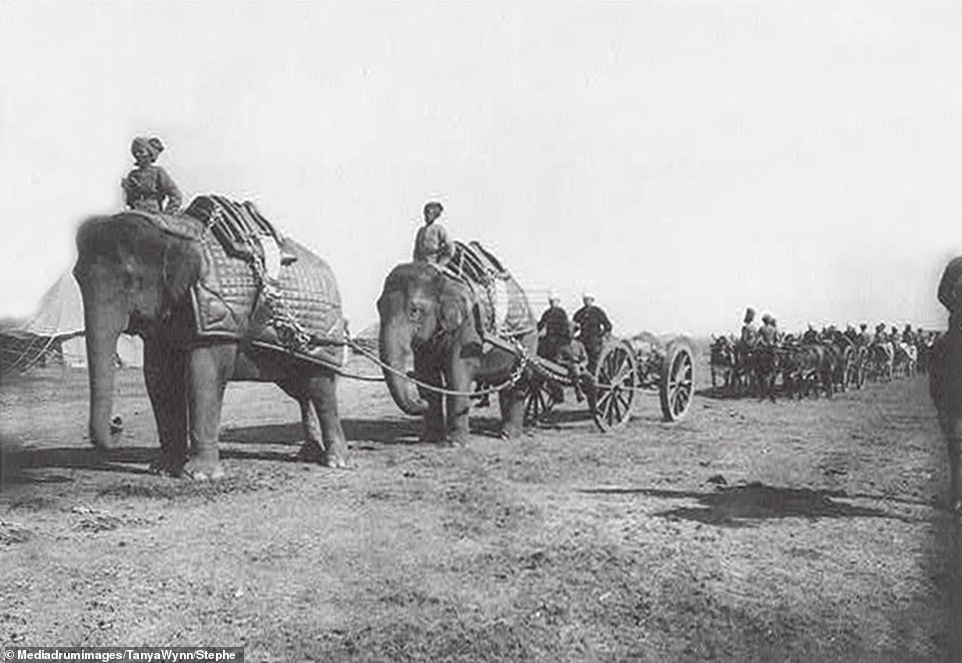 Indian elephants are photograph pulling a large artillery piece. While they were slower than horses, Elephants were more stronger and to carry the heavy load on rough terrain 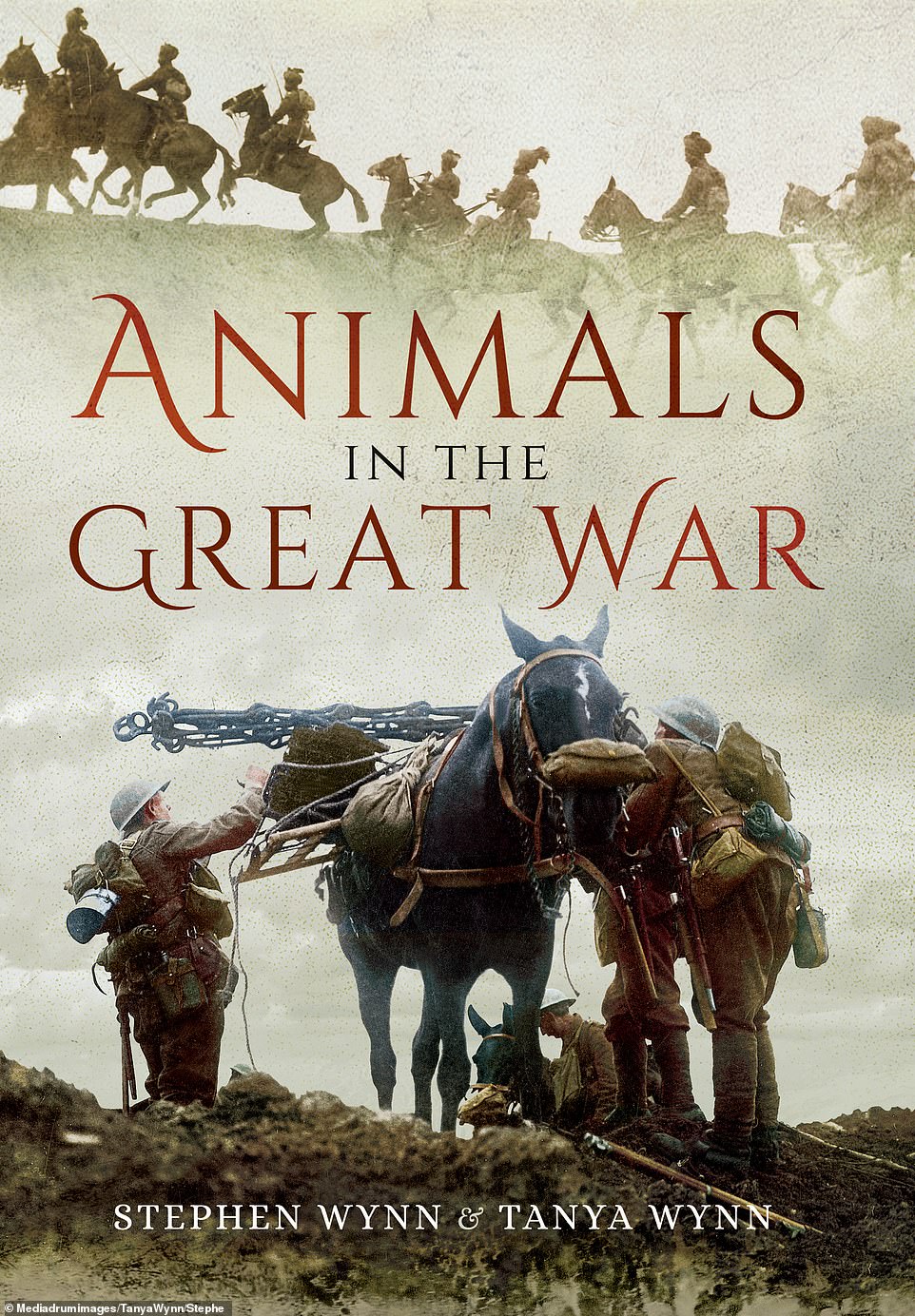 The images and stories about these animals, from Tanya and Stephen Wynn’s book Animals in the Great War (pictured), looks at the impact of creatures – great and small – on both sides of the Great War