ANOTHER new Covid variant with potentially worrying mutations has been discovered in the UK.

Like strains found in South Africa and Brazil, it carries a mutation that can make Covid jabs less effective. 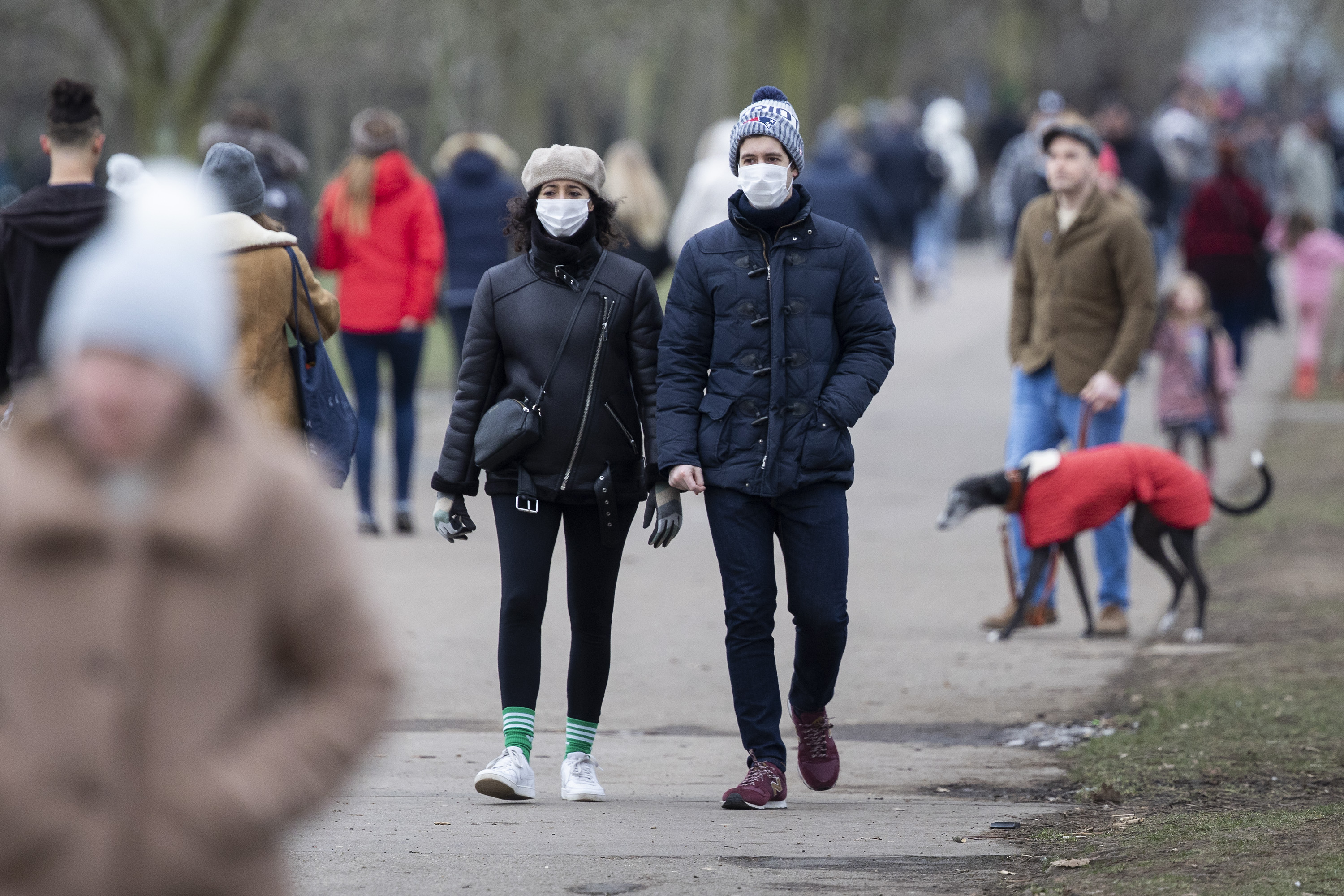 Scientists say at least 32 cases of coronavirus have been caused by this variant.

It comes amid alarm over several new variants of Covid which have spread in the UK since the end of 2020.

The latest addition, described by researchers at the University of Edinburgh, has similarities to the Kent strain, but with several additional mutations.

One of these is the E484K mutation, also found in the South African and Brazilian variants, and scientists believe it could make vaccines less effective.

It causes a change on the spike protein – found on the outside of the virus – that plays an important role in helping the virus to enter cells as well as the immune system's response to it.

Early studies have shown the E484K mutation is better able to hide from antibodies that kill the virus.

Vaccine companies have confirmed their jab works less efficiently – but still to some degree – on this mutation.

It is one of the seven new variants reported in the US, leading to Dr Anthony Fauci to plead with Americans not to "let your guard down."

More than 100 cases of B.1.525 have been identified globally in total, according to the University of Edinburgh report.

But the roots of the variant go back as far as late December in Nigeria, where 12 cases have now been found.

The number of cases of a new variant that are discovered in a country is largely down to how much genomic sequencing it does – the UK does around half of the world's total.

The Edinburgh researchers did not describe if the new variant caused different symptoms, more severe disease or was more infectious.

Dr Simon Clarke, an associate professor of cellular microbiology at the University of Reading, the presence of the E484K mutation was known in the South Africa variant to weaken vaccine efficacy. 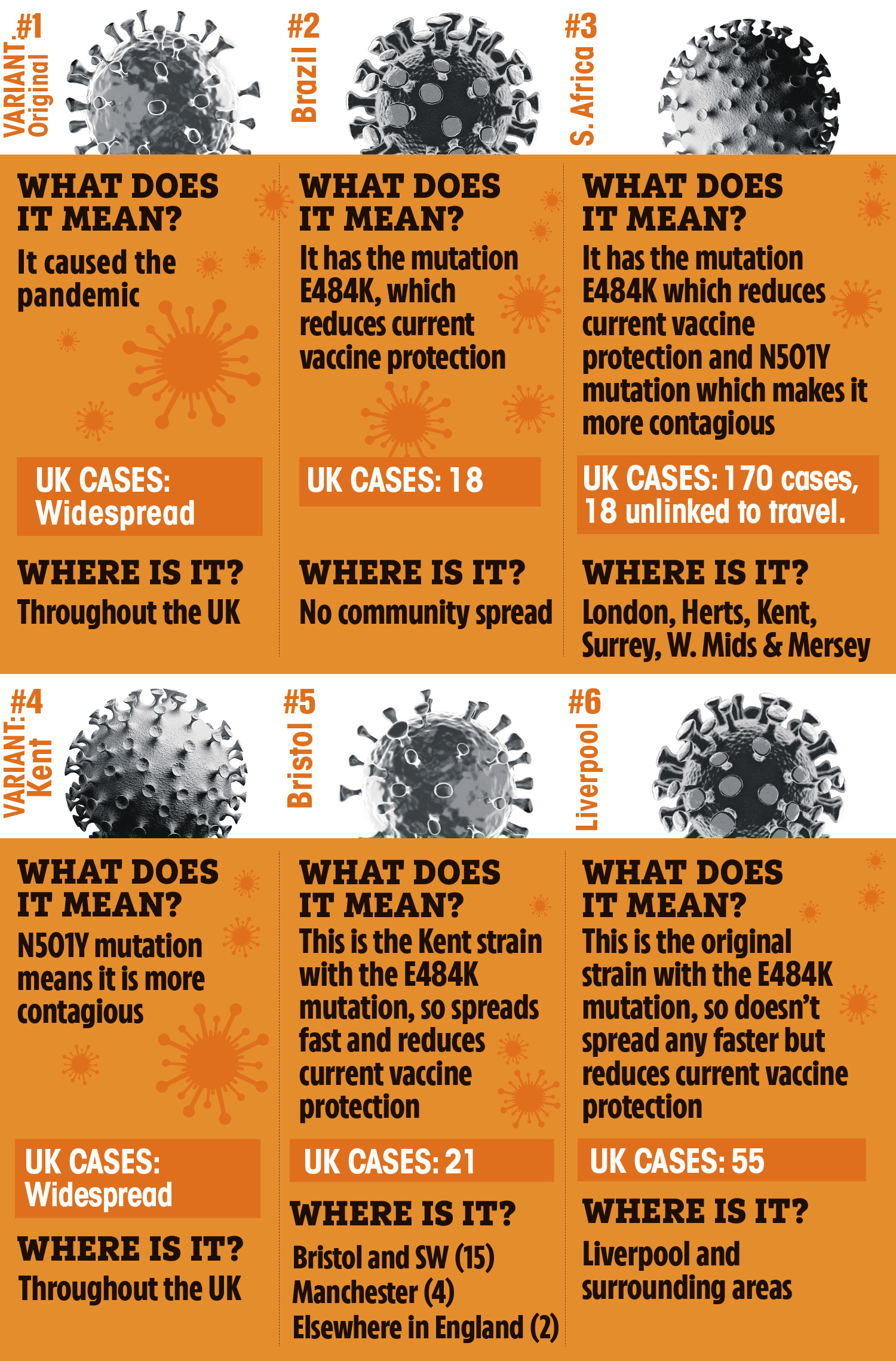 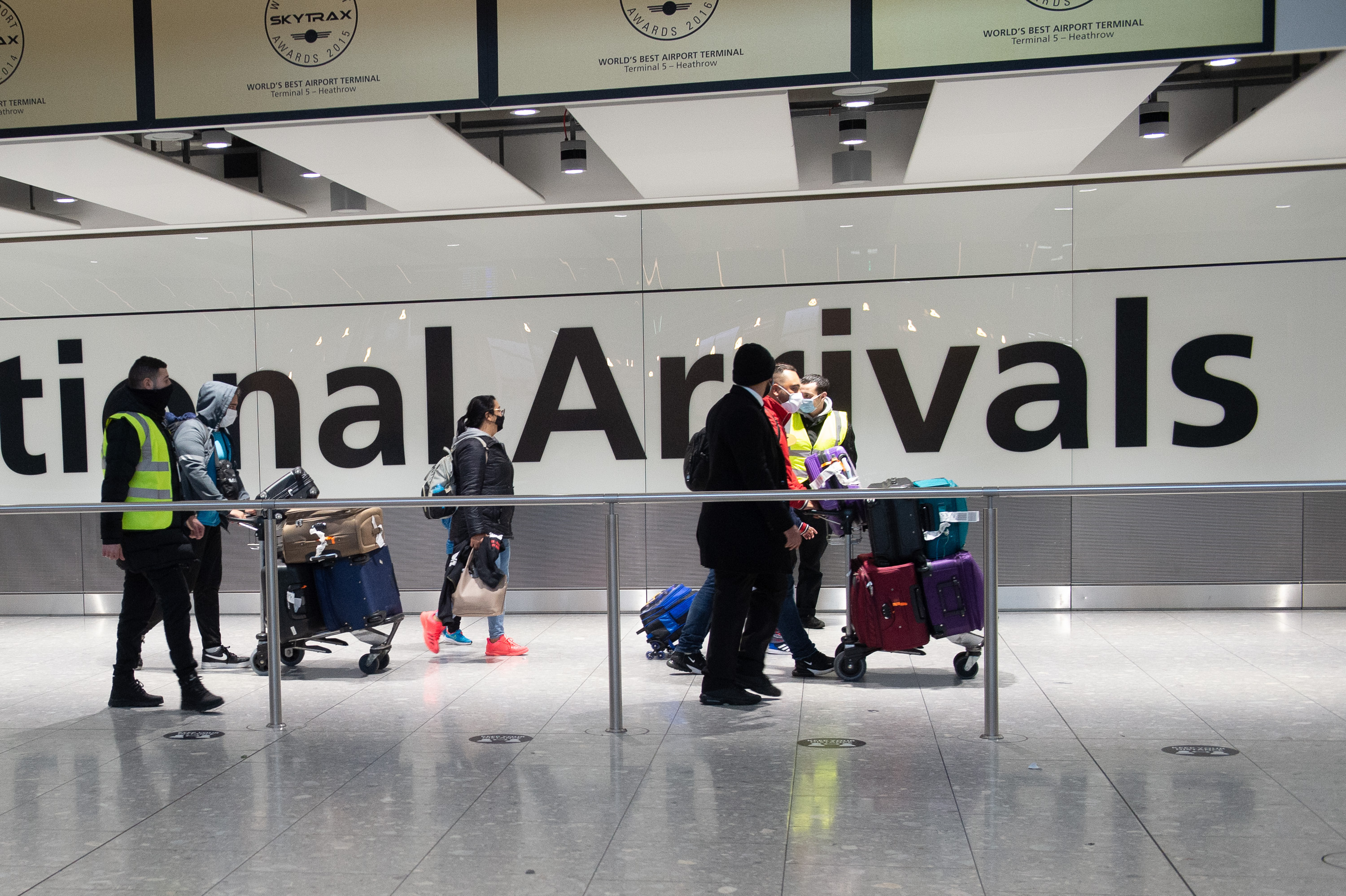 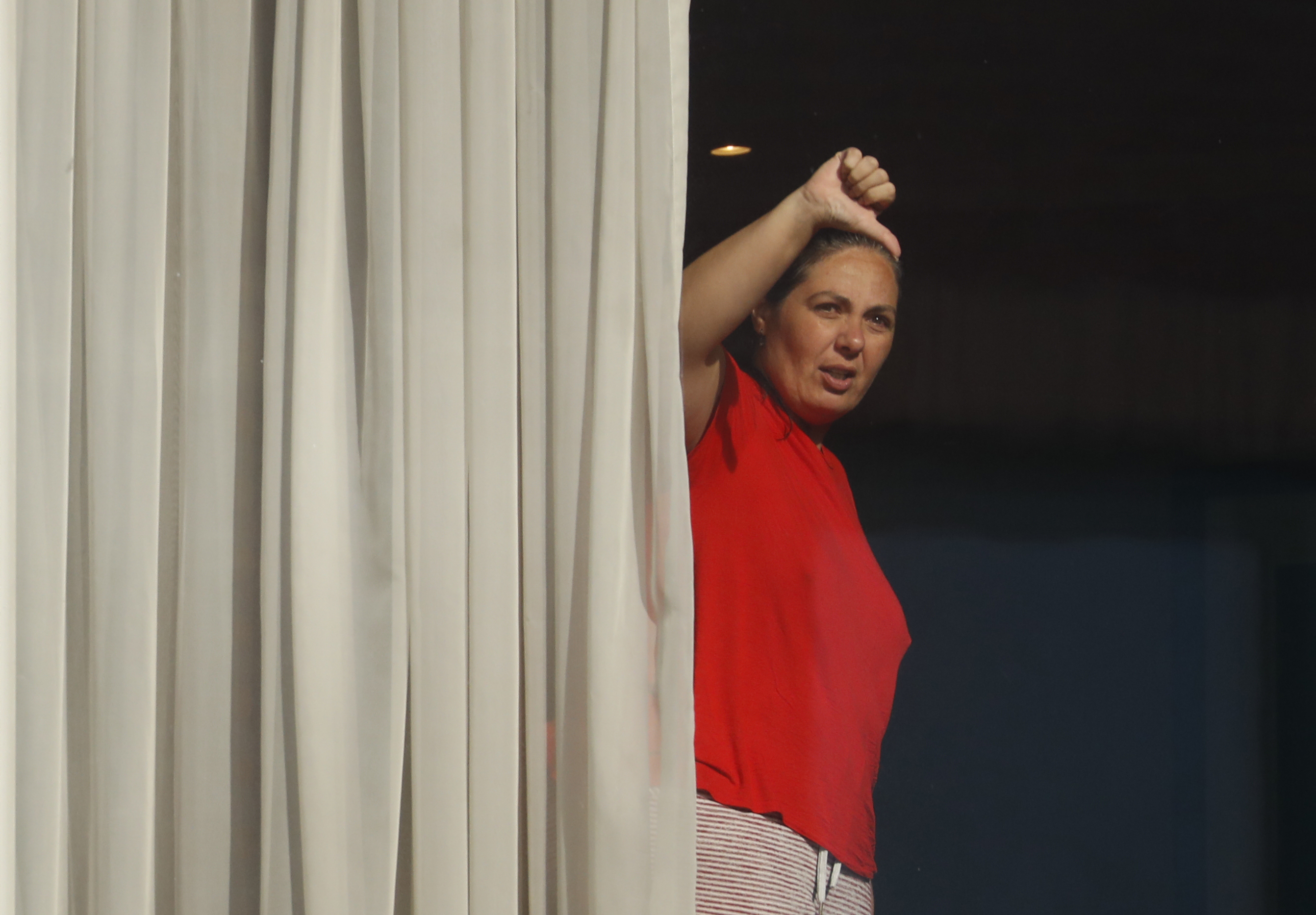 He told The Guardian: “We don’t yet know how well this [new] variant will spread, but if it is successful it can be presumed that immunity from any vaccine or previous infection will be blunted.

“I think that until we know more about these variants, any variants which carry E484K should be subject to surge testing as it seems to confer resistance to immunity, however that is generated."

Already the original coronavirus strain, which cropped up in Wuhan, and the Kent strain have evolved to develop the E484K mutation over time.

Cases of the Kent version have been detected 22 times, mostly in Bristol, and the original version 55 times in Liverpool and surrounding areas.

These new mutations have led to surge testing in several locations in England to weed out as many cases as possible and prevent further spread. 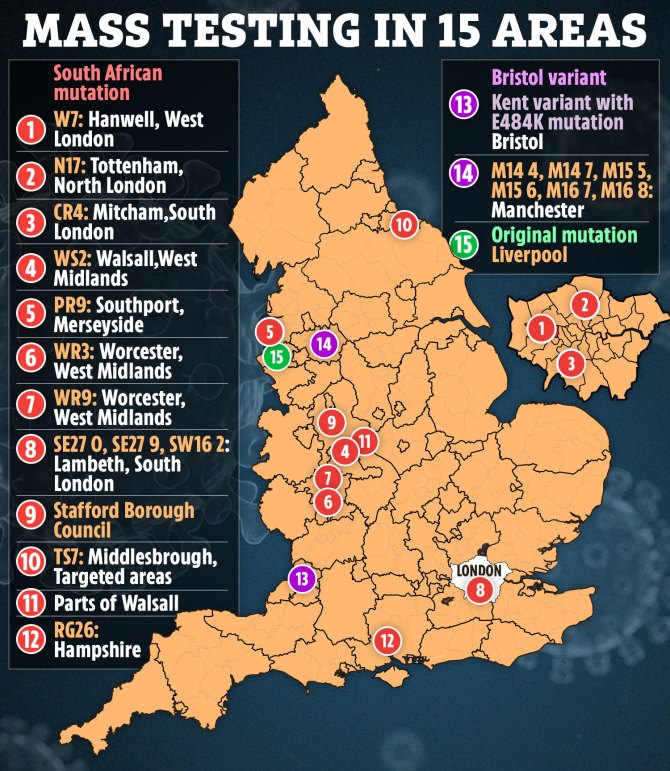 Ravi Gupta, a professor of clinical microbiology at the University of Cambridge, agreed surge testing for the new variant was warranted.

She noted the E484K mutation had a change “that likely helps it escape from our antibodies”.

Scientists say it is quite common for viruses to mutate, and more often than not, these mutations are harmless.

But sometimes “mutations of concern” can emerge, which can make the virus more transmissible or pose a risk of re-infection.

Prof Jonathan Stoye, a group leader at the Francis Crick Institute, said it wasnot surprising that the new variant contained some familiar mutations.

“The minute you start putting selection pressure on this virus, you start selecting particularly for things that give it the ability to escape immune responses, and I think that is what we are seeing here,” he said.

Scientists have explained that the virus has more opportunity to mutate when case numbers are high.

Therefore the fewer cases of infection, driven by lockdowns, the less chance it will have to change.

Lawrence Young, professor of molecular oncology at Warwick Medical School, told the PA news agency: “The more the virus is allowed to spread, the more people who are infected, the more likely it is that this virus will change and evolve and form new variants.

“Variants have been generated in everybody who’s infected, really, at one level or another.

“The more the virus does spread, the more it replicates, the more chances it has to change.”

He added: “One way of trying to put the can on the lid on the number of variants being generated is to try and control the spread of the virus.”

The Government has tightened the UK's borders in order to shut out new coronavirus variants.

People arriving from other countries now have to quarantine for 10 days or face fines or a prison sentence.

If they are arriving from one of the 33 risk countries, they must self isoalte in one of the Government managed quarantine hotels.

END_OF_DOCUMENT_TOKEN_TO_BE_REPLACED

Father, 69, spends 30 years transforming his garden into a 'jungle'

Father-of-three, 69, spends 30 years transforming his 8,000 square foot suburban Yorkshire garden into an incredible ‘jungle’ with 100-foot palm trees Dr Simon Olpin, 69, has spent years growing a ‘jungle’ in back garden of his home in Sheffield, South Yorks.  The clinical biochemist began his impressive garden in 1987