Anti-lockdown protesters are now divided about whether a large rally should go ahead in Melbourne as debate continues about Victoria Police's response to the pandemic and lockdown restrictions.

Promoters are touting planned protests in capital cities around the country on Saturday – including in Melbourne where stage four lockdown restrictions are in place – as "Freedom Day" rallies.

A day before the demonstration, scheduled to take place at Melbourne's Shrine of Remembrance, some supporters are having second thoughts about whether one should go ahead at all. 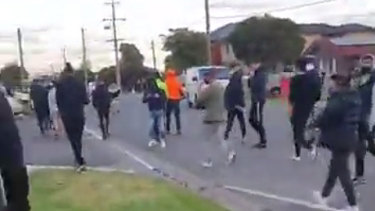 Anti-lockdown activists have drawn thousands of their followers onto encrypted messaging apps as Facebook blocks their social media pages. A channel appeared on chat app Telegram on Tuesday and by Thursday night had garnered 5300 members.

However, prominent Melbourne-based anti-lockdown activist Raph Fernandez told his followers on Thursday he no longer supported the protest.

"I feel like we are playing right into the hands of authority, at least in Melbourne," he said in a Facebook live video seen by thousands.

"You're going to turn the people against yourselves, especially when the day after there's going to be a plan for a road map. Since we aren't the majority, you do not want to be putting the public and the majority against us anymore, because their lives have been completely destroyed." 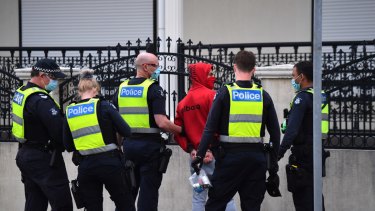 Police detained then released a man in relation to anti-lockdown protests in Dandenong last week.Credit:Joe Armao

Meanwhile, those in the encrypted Telegram channel have been urged to get virtual private networks (VPNs) that can encrypt their internet activity, remove their profile pictures and act "invisibly" online.

"Everyone who's made their way here should be proud of themselves," the channel administrators posted on Thursday evening.

"Facebook seems completely empty compared to 1 week ago. Everyone has migrated to other channels and gone 'underground'."

A well-known Sydney-based member of the community was telling followers on Thursday to lie to police to avoid fines for breaching coronavirus orders.

"If anyone around you is questioned re: social distancing, move in [and say] 'this is my brother, sister, aunt, uncle, mum, dad, first cousin, second cousin twice removed, brother-in-law, sister in-law … you get the drift," she said.

"Stick together right, just like a swarm of bees".

Former My Kitchen Rules host Pete Evans was among a variety of prominent faces who put their faces to a video inciting people to go to Saturday's planned protest, claiming governments enforcing lockdown measures would be "charged with treason against the public".

In an emotive press conference last week, Victoria Police Assistant Commissioner Luke Cornelius said the force would not tolerate “batshit crazy” anti-coronavirus theories and warned people planning on attending protests that their feet "won’t touch the ground" before they are arrested.

Organisers suspected of inciting the illegal protest have already been arrested and charged.

A pregnant woman was arrested at her home in Ballarat this week for allegedly encouraging people to take part in the rally. Zoe Buhler’s arrest has been criticised by lawyers and civil liberty groups who say it is part of an "overzealous police response" to the pandemic.

Mr Cornelius, who has dismissed protesters as the "tinfoil hat-wearing brigade", said police were doing what they were required to do to stop the illegal rally and he was satisfied the treatment of Ms Buhler was appropriate in the circumstances.

He said police have been visiting people of interest and have sent official warnings to more than 80 people who are "at risk" of attending the "Freedom Day" protest.

The decision to promote the Shrine of Remembrance as a location for the proposed protest was "completely inappropriate", he said.

"We share the frustration that is shared by the whole community, but the key piece here is that leaving home to protest under the current conditions, is absolutely not on," Mr Cornelius said.

Get our Coronavirus Update newsletter for the day’s crucial developments at a glance, the numbers you need to know and what our readers are saying. Sign up to The Sydney Morning Herald’s newsletter here and The Age’s here.

END_OF_DOCUMENT_TOKEN_TO_BE_REPLACED

Champions once again! The Los Angeles Dodgers won the World Series on Tuesday, and Hollywood’s biggest celebs could hardly contain their excitement. After the Dodgers beat the Tampa Bay Rays 3-1 in Game 6, at Globe Life Field in Arlington, Texas, Twitter erupted with celebratory messages and tributes. “Congratulation @Dodgers! What a

END_OF_DOCUMENT_TOKEN_TO_BE_REPLACED

END_OF_DOCUMENT_TOKEN_TO_BE_REPLACED
Recent Posts
We and our partners use cookies on this site to improve our service, perform analytics, personalize advertising, measure advertising performance, and remember website preferences.Ok