We have made our live coverage of the coronavirus pandemic free for all readers. Please consider supporting our journalism with a subscription.

International students could start returning to Victoria before the end of this year in a new plan floated by the state government.

Around 120 students will be able to return to the state each week in the first stage of the Andrews government scheme, with priority given to health and medical degrees which have a practical component, as well as those undertaking postgraduate research.

Students entering Victoria as part of the scheme will be in addition to the state’s existing overseas arrivals cap, meaning they will not take the place of returning citizens. Victorian universities will provide the funding for the extra quarantine places, with students required to pay for their flight into Melbourne.

Around 47,000 students are currently enrolled with Victorian education providers but remain overseas due to closed borders.

Large-scale international student arrivals, not expected until next will, will include students enrolled in TAFE, secondary schools, private education providers and English language classes.

The Victorian government has submitted its two-stage plan to the Commonwealth for approval.

Professor Duncan Maskell, Vice-Chancellor of the University of Melbourne, said the university sector was looking forward to the federal government “reviewing and approving the plan as soon as possible”.

Victoria’s Higher Education Minister Gayle Tierney said she was excited to soon welcome back a “valued part of our community”.

As Sydney’s retail stores, restaurants and gyms prepare to open to the public after months of lockdown, it remains unclear when the integrated Service NSW vaccine certificate will be made available to residents across the state.

Last month, Customer Service Minister Victor Dominello conceded the integrated passport app would not be ready when the state reopens, but a two-week pilot program with up to 500 people in regional NSW would commence on October 6.

However, a Service NSW spokesperson on Thursday said that, while the pilot had started, it was only “being tested internally, primarily amongst Service NSW staff” and external participants will be invited to join the pilot in the coming days.

NSW Premier Dominic Perrottet fast-tracked multiple aspects of the statewide three-stage plan yesterday, with the number of fully vaccinated people allowed at household gatherings, weddings and funerals in NSW on Monday to be double what was initially promised. Indoor swimming pools are also set to open and pubs, restaurants and hairdressers will be allowed to reopen to fully vaccinated customers as promised.

Defence personnel will be deployed to drive ambulances and triage tents are going up outside many Melbourne hospitals as part of a string of extraordinary measures designed to protect the state’s health system from being overwhelmed by a growing wave of COVID-19 patients.

For the first time in Ambulance Victoria’s history, two paramedics will no longer be deployed in each ambulance. In a bid to improve response times, crews will instead be split, and a single paramedic will be joined by a driver from the Australian Defence Force, St John Ambulance Australia, State Emergency Service or student paramedics. 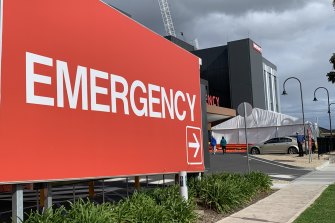 Ambulance Victoria executive director of clinical operations Mick Stephenson said ten defence staff are expected to start work next week, and there is a request for more.

“It’s something we would have liked not to have done, but that is the state of the nation, we’re in such dire circumstances we have to do it,” he said.

More on the situation in Victoria here.

Tech giants could be held legally responsible for the content published on their platforms after Prime Minister Scott Morrison and his deputy Barnaby Joyce launched extraordinary attacks on social media companies.

Facebook is already under fire globally after an American whistleblower leaked documents accusing the company of knowingly harming users, with Assistant Minister for Mental Health David Coleman declaring “social media platforms can’t be trusted to act in the best interests of children”. 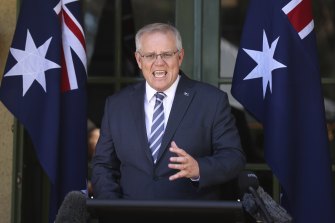 “Social media has become a coward’s palace, where people can just go on there, not say who they are, destroy people’s lives and say the most foul and offensive things to people, and do so with impunity. Now that’s not a free country where that happens,” Mr Morrison said on Thursday.

This morning’s headlines at a glance

Good morning and thanks for your company.

It’s Friday, October 8. I’m Broede Carmody and I’ll be anchoring our live coverage for the first half of the day.

Here’s everything you need to know before we get started.