A coronavirus cluster linked to a butcher at Chadstone Shopping Centre may be a superspreading event, the chief health officer has warned, as the number of cases grew to 20 on Sunday and the outbreak leaked into regional Victoria.

Premier Daniel Andrews remains "confident" Melbourne will soon take the next step on its road map out of the second coronavirus wave but the number of active cases failed to drop for the first time since August on Sunday, and new mystery cases are of concern. 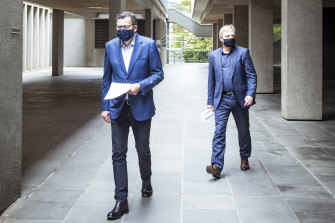 The Butcher Club cluster has stretched from Frankston to Melton to Kilmore, demonstrating the redundancy of the five-kilometre restriction on suppressing the spread of coronavirus at this stage of the second wave of the pandemic, epidemiologist Catherine Bennett said.

Six staff, eight close contacts and two customers have been identified as part of the outbreak, which is believed to have been started by a Frankston cleaner who failed to self-isolate when members of her household contracted the virus.

Another four confirmed cases are believed to be linked to the outbreak, but contact tracers haven't been able to establish an obvious connection.

"It might be, again, super spreaders or super-spreading events … and there is only casual contact or in facilities like the public toilets in Chadstone that might have contributed to this transmission," Professor Sutton said.

Professor Bennett said the five-kilometre rule, which the Premier has not ruled out extending into summer to prevent large crowds gathering at packed beaches, would not stop the virus from spreading when case numbers were this low.

"Most of our cases, well over 90 per cent, in recent weeks are linked to clusters and outbreaks, and the current one at The Butcher Club just shows the five-kilometre rule isn't effective for workplaces," Professor Bennett said.

"Even if one of those secondary cases had passed it on before you got them into quarantine, what's it matter whether they went to Woolworths three kilometres or eight kilometres away. They're no longer where the outbreak started."

She said the government's focus should shift from strict restrictions – such as the limit on movement – to successfully following up close and secondary contacts, and containing outbreaks.

"When case numbers are this low, there is real opportunity to be absolutely precise," she said. 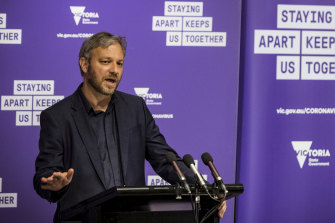 The city's rolling 14-day average dropped to 11.9 on Sunday, but Professor Sutton said mystery cases were "always a concern". The public health team has identified three new mystery cases in postcodes 3145, 3023 and 3091.

Over a two-week period between September 18 and October 1, the Department of Health and Human Services identified an average of 13 mystery cases in metropolitan Melbourne and nine in regional Victoria.

Professor Sutton said the Chadstone cluster was a "salient" lesson that regional Victoria, where there are only three active cases, remained at risk because of essential workers moving between the regions and metropolitan Melbourne.

Victoria recorded 12 new COVID-19 cases on Sunday and one death. Six of the 12 cases were linked to outbreaks; three to The Butcher Club and three to the Electra Park Medical Centre in Ashwood. The other six cases remain under investigation.

Public health teams in the new suburban hubs are doing the bulk of the contact tracing work to contain The Butcher Club outbreak.

Mr Andrews said he would soon announce the locations of the two remaining suburban contact tracing hubs he flagged last month, and that "there might be more than two".

The Premier said the decentralised contact-tracing model, lauded by leading epidemiologists and described by Prime Minister Scott Morrison as the "gold standard" in contact tracing, would become a permanent feature of Victoria's public health team.

Professor Sutton welcomed the announcement, describing it as a "really critical evolution" to respond to communicable diseases, such as COVID-19 and legionnaires' disease, and rapidly expand the workforce as necessary.

"I have been an advocate for a decentralised … public health function for a long time," Professor Sutton said.

"The ability to understand that on-the-ground intelligence is much greater and the agility and flexibility as well as the surge capability, because you got those in place ongoing, is much greater.

"It's an opportunity to build experience and to build, you know, the kind of credentials for public health that will be an asset right through."

Mr Andrews said he expected a further easing of restrictions on October 19, and was "as confident as you can be" that the state's 14-day average would drop to fewer than five daily cases in a fortnight.

"Certainly a very different place weeks and months after that, it will have – it needs to evolve in that safe and steady way. I'm really confident that it can."

Internal DHHS modelling accounts for the assumption that people could flock to beaches and parks in large crowds as the weather warms up, and has formed the thresholds and timelines set out in the road map, Professor Sutton said.

"Alan [Cheng] spoke to the fact that it's very fragile in the sense that a significant outbreak, you know, when you get down to the last 20, 30, 50 cases, it's all dependent on who those 50 people are and how they're behaving and what their connections are," Professor Sutton said.

"So the modelling can only tell you a kind of map on the path, but it can't tell you exactly what it will look like when you get there."

END_OF_DOCUMENT_TOKEN_TO_BE_REPLACED

END_OF_DOCUMENT_TOKEN_TO_BE_REPLACED
Recent Posts
We and our partners use cookies on this site to improve our service, perform analytics, personalize advertising, measure advertising performance, and remember website preferences.Ok