Barbarians, barriers and Brexit: How Hadrian’s wall pointed to the future

London: Emperor Hadrian “built a wall for 80 miles, which was to separate the barbarians from the Romans”, wrote a Roman scholar some time in the 4th century AD.

Two centuries earlier Hadrian had been touring his empire. He’d spent a bit of money in France to keep the Gauls happy, he’d inspired the troops in Germany, “and so, having reformed the army, he set out for Britain and there he corrected many abuses” (which included sacking a prefect who’d been disrespectful to Hadrian’s wife). 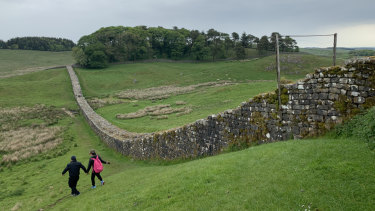 He also reportedly scandalised the locals with a “passion for men” and “adulteries with married women”.

Hadrian looked north, saw its seething, quarrelling tribes, and decided it wasn’t worth the bother. And then he went back to France, and in the next six years his army built a wall across the neck of Britain, studding it with forts and towers, marking the northernmost reach of Rome’s control, if not its influence, for three centuries until the Empire started dissolving.

Two millennia later the wall is still there. Or a remarkable amount of it, anyway, considering locals started stealing the stones for their own use in the 7th century. 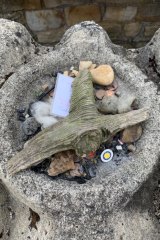 An offering bowl at the Temple of Mithras at Hadrian’s wall.Credit:Nick Miller

They’re rewarded with regular gems such as an old Roman temple of Mithras, its roof long gone, its walls worn down to waist height, but still evocative; an ancient stone bowl on the altar now holds the offerings of passers-by: pennies, flowers, a gnarled root, smooth stones, a tuft of wool, a Spanish badge, a laminated card with a Christian greeting.

On a nearby hill butting up against the wall is the stone footprint of a Roman garrison built to a plan repeated across the Empire: here the luxurious commander’s quarters with under-floor heating, there the long barracks, down here the communal baths.

Outside the old gates the bones of a village stick out of the sod: houses where the "unofficial" wives of the soldiers lived until the rule against army marriage was relaxed.

Tourists wander over it and try to imagine how it was.

And you get other thoughts, too. About other walls.

Borders and walls. Europe’s obsessed with them right now. A European parliament election was just fought, partly, on what Australians would call border security issues; the EU has built around 1000km of new border fences since the fall of the Berlin Wall in 1989, to keep out migrants.

Brexit sits on a knife edge, the project’s whole future pivoting on the intractable question of what to do with the invisible line between Ireland and Northern Ireland, whether barriers must return to this divided land.

And further afield, of course, another wall is to be built. And it’s going to be beautiful and so, so great. 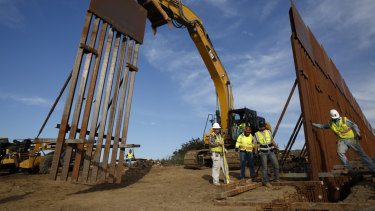 Dr Chiara Bonacchi, a historian at the University of Stirling, noticed that soon after Trump’s election and announcement of a wall to be built on the US southern border people on social media started to explain, support or oppose the plan by citing Hadrian’s Wall.

Those in favour would emphasise the wall’s strength and longevity, imagining that in two thousand years’ time tourists will be admiring Trump’s monumental legacy to keep out the barbarians. Those opposed would mock the wall’s failure to keep the northern tribes in their place (noting, perhaps, Trump's Scottish ancestry) and predict Trump’s effort, too, would fall into ruin, a curiosity of an arrogant and depraved emperor.

Bonacchi also noted that most thought of the wall as a something built to “keep out” others, neglecting its second role as “a place of encounter, a border zone… allowing for interactions and trading relationships”.

There is a school of thought that Hadrian’s wall was not built, as that old scholar wrote, to keep out the barbarians, but rather to regularise and encourage trade and settlement. A very modern idea of a border rather than a barrier.

One imagines Trumpists would give this theory short shrift. 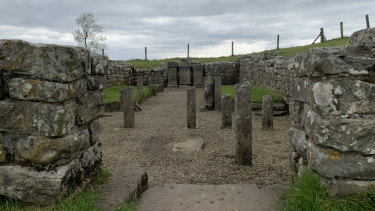 An area of exchange not a barrier?Credit:Nick Miller

“Despite being a symbol of separation and isolation, there is one (alarmingly) unifying function that Hadrian’s Wall is playing within the political conversations we have analysed,” said Bonacchi. “It is a wall that divides, but also connects regions and peoples who are experiencing populist nationalism today, regardless of the side of the fence where they stand.

“As such, it remains a powerful but contested image and heritage site, of great resonance in today’s world.”