The BBC Weather meteorologist said the sunshine may elude many across Northern Ireland and Scotland due to an area of cloud taking over in the early hours of Friday. Cloudy conditions are also forecast to usher in outbursts of rain across southeast England and East Anglia. Despite the unsettled conditions, Mr Miller said temperatures are set to remain into the high teens, low 20s, with an uptick expected into the weekend.

The BBC Weather forecaster said: “It’s a fine start out there across many places but not many of us will hold on to sunshine today.

“There are some showers or areas of rain moving in but a lot of that is gone into the weekend and we’re left with quite a bit of dry weather to enjoy.

“Temperatures not as high as they’ve been but still in the high teens, low 20s.”

Mr Miller continued: “This cloud to start the day in Northern Ireland, westernmost parts of Scotland is the source of the odd spot of rain, maybe one or two showers. 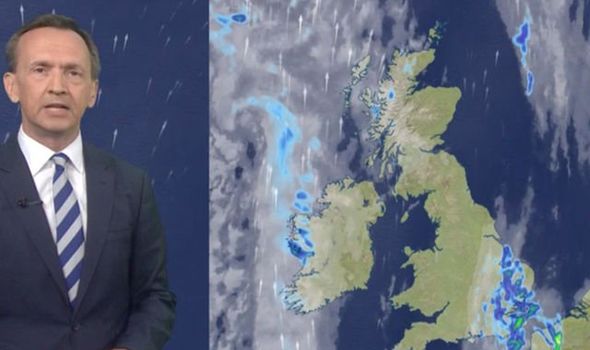 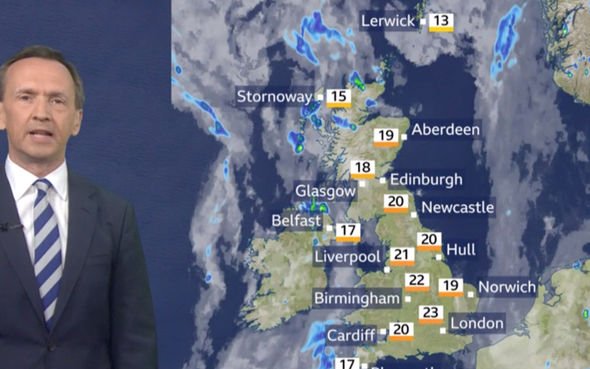 “This are of cloud now starting to nudge some rain towards the south coast of England, really towards the Isle of Wight and then running northwards across southeast England and East Anglia.

“Outbreaks of rain on the way here and maybe a few heavier bursts, perhaps a rumble of thunder, but particularly the further east you are as it moves.

“But it does mean a cloudier, cooler, and perhaps wetter day for some compared to yesterday.

“If we look at things at four o’clock this afternoon, you can just pick up the odd shower in northern and western Scotland, it’s very hit and miss, most places staying dry.” 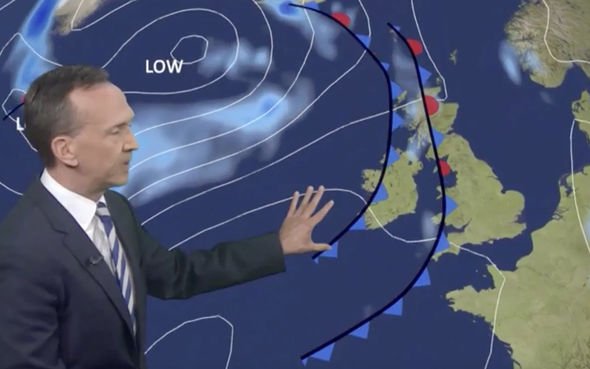 The BBC meteorologist noted the cloud will slowly disappear overnight, with temperatures set to hit the low teens across most of the UK.

With the cloud out of the way, sunshine is expected to make a return on Saturday morning although some outbreaks of rain remain possible in some eastern areas.

Mr Miller added: “Onto the weekend, the source of cloud moves on and weaken and die away through the weekend as high pressure starts to reestablish, that’s why there’s going to be plenty of dry weather this weekend. 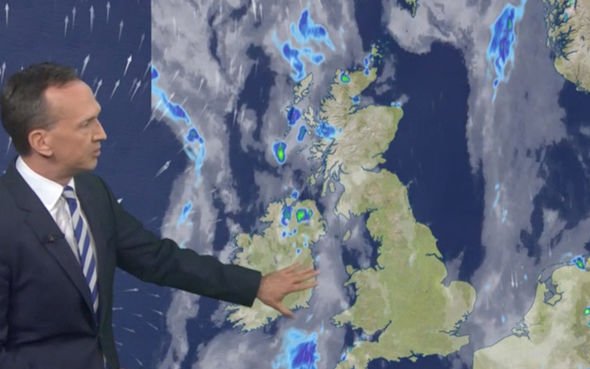 “Gradually brightening across eastern England after a cloudy, sundown start.”

A spokesman for the Met Office said: “The weekend weather for the southwest will consist of scattered showers but sunny spells in between with temperatures remaining above average for the time of year, although not as warm as has been seen this week.

“This is largely thanks to a high-pressure system moving in from the Atlantic Ocean which will keep temperatures relatively warm for much of the UK.”