Britons can look forward to the return of the next 30C summer weather heatwave, according to the latest BBC weather forecast map. This comes as a welcome change following news that UK holidaymakers returning from Spain will have to quarantine under new coronavirus rules. Britain has also been besieged by violent thunderstorms, heavy rain and Met Office weather warnings in recent days.

BBC meteorologist Tomasz Schafernaker said that the heatwave temperatures will return “by the end of next week” following a few more days of heavy rain and strong winds.

He said: “The rain was heavy yesterday but today I’m pleased to say it’s not going to be quite as dramatic.

“There will be more sunshine than rain. The weather system that brought all that rain and wind, largely around southern areas, has moved into continental Europe now.

“There are a few showers moving through Scotland this morning but overall it’s looking pretty clear. Highs of 23C in London and 20C in Aberdeen.”

JUST IN: Flood alerts in place as torrential downpours to lash Britain 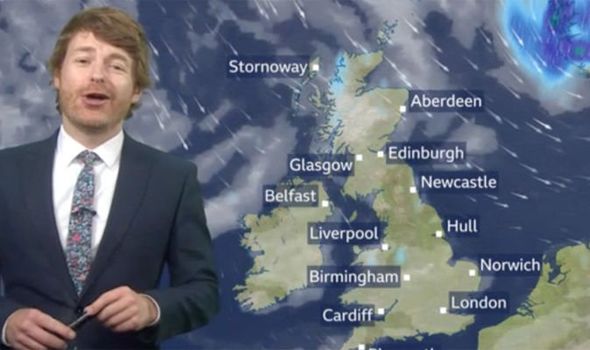 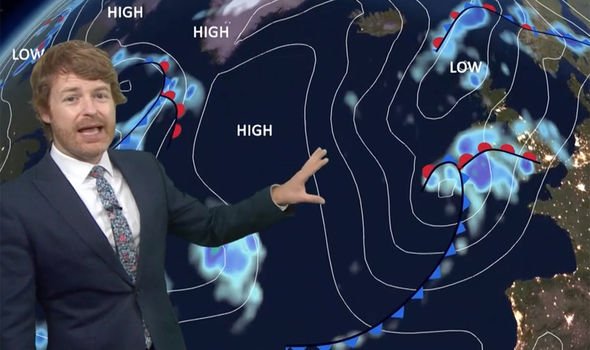 Schafernaker continued: “But overnight the clouds will increase and we are expecting another bout of rain to arrive into western areas of England and Wales, as well as most of Northern Ireland in the early hours of Monday morning.

“This weather front coming in from the Atlantic will also bring in some quite blustery weather – a real mix bag, later Monday the weather will improve.

“I will leave with a bit of good news. It does look as if the weather will be settling down through the week.

“And towards the end of the week we could be coming back to warm, summer-like weather at long last.

“By Friday I wouldn’t be surprised if we didn’t hit 30C in the south.” 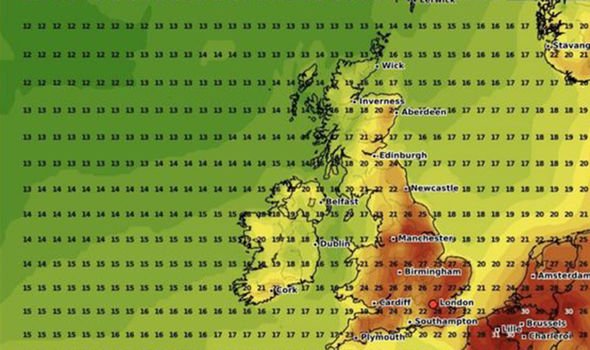 So far this weekend has been a washout, with the UK battered by “very torrential downpours” following a succession of rain-bearing systems.

Southern England has been the main target of the downpours, although the weather has stayed warm with highs of 22C.

This comes as the latest WXChart forecasts echoes the BBC forecast for next week, with temperatures reaching up to 25C by next Friday. 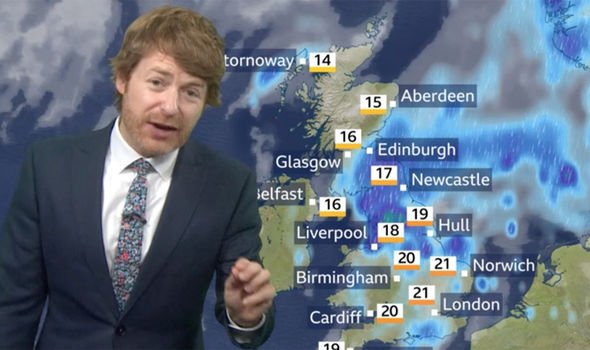 The mercury could hit 26C for the start of August on Saturday before Britons enjoy scorching highs of 28C next Sunday.

The temperatures of up to 28C are expected to continue into the following Monday in a glorious heatwave.

Weather charts even show large parts of the UK turning red next week as the mercury soars.

London and the South East will bask in the hottest temperatures, according to the maps.

END_OF_DOCUMENT_TOKEN_TO_BE_REPLACED

END_OF_DOCUMENT_TOKEN_TO_BE_REPLACED
Recent Posts
We and our partners use cookies on this site to improve our service, perform analytics, personalize advertising, measure advertising performance, and remember website preferences.Ok