‘What a first week on my new mic’: Emma Barnett makes thinly-veiled reference to row with guest who stormed off Woman’s Hour on her third day – as Adrian Chiles is confirmed as her replacement on 5 Live

New Woman’s Hour presenter Emma Barnett today made a thinly-veiled reference to a row with a guest who stormed off her BBC programme during her first week.

The host tweeted a picture this morning of herself pointing to her microphone in the Radio 4 studio, saying: ‘And that’s a wrap. What a first week on my new mic.’

She also made reference to the Queen’s message on Monday’s show, a piece on naked rambling on Tuesday and former poet laureate Carol Ann Duffy this morning.

Miss Barnett, 35, has defended herself this week after being accused of humiliating a guest who pulled out of an interview on just her third day as host of the programme.

It comes as Adrian Chiles was confirmed as the permanent host of Radio 5 Live’s weekday mid-morning show on Thursdays and Fridays following her departure.

Miss Barnett, who is back on next Monday at 10am, claimed yesterday she had been discussing off-air past allegedly anti-Semitic comments by actress Kelechi Okafor. 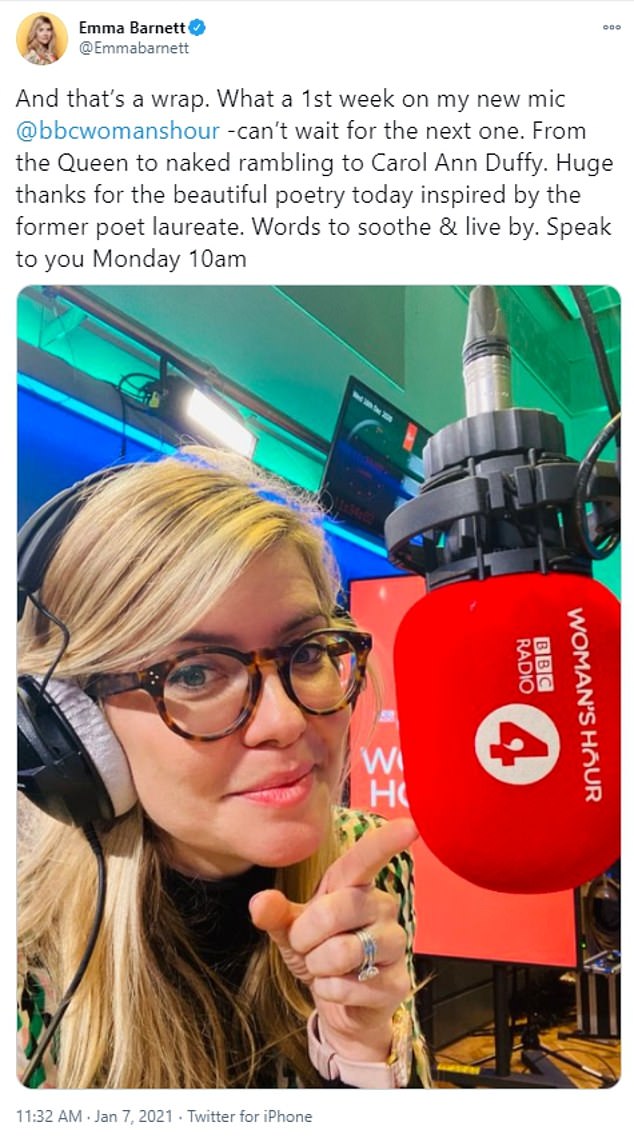 Women’s Hour presenter Emma Barnett tweeted a picture this morning of herself pointing to her microphone in the Radio 4 studio. The photo was originally issued by the BBC on Monday 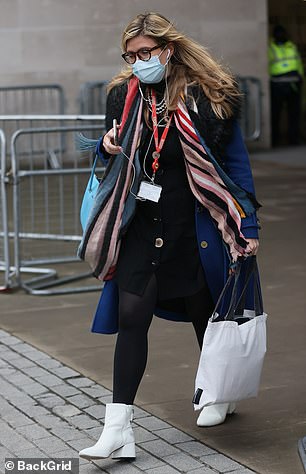 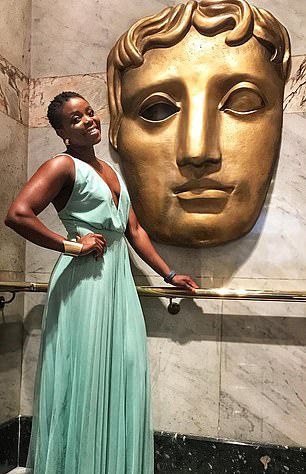 Emma Barnett (left, leaving BBC New Broadcasting House in London yesterday) claimed she had been discussing off-air past allegedly anti-Semitic comments by actress Kelechi Okafor (right, at the British Academy of Film and Television Arts in London in October 2018)

Miss Okafor, who was due to talk about the MeToo movement, overheard the discussion and posted on social media that she was ‘coming off’ the programme ‘because what I’ve just had to witness is absolutely degrading and vile’.

She claimed Miss Barnett, not realising her microphone was on and guests could hear, was ‘talking s*** about me to the producers’.

In a series of Twitter posts, the actress – who has appeared in adverts for Samsung, Maltesers and Irn Bru as well as BBC reality series Special Forces: Ultimate Hell Week – wrote: ‘You can have a genuine concern about something you’ve been told about me and address it in a manner that is kind. That wasn’t what took place.’

Amid a growing row, Miss Barnett – who is Jewish and has spoken out against anti-Semitism – issued a statement on Twitter. 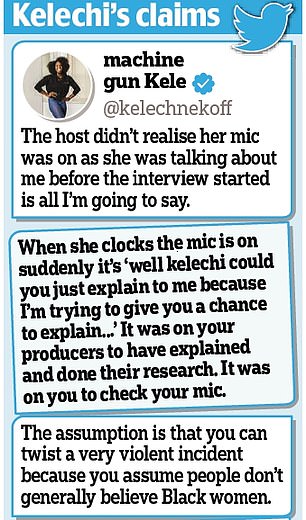 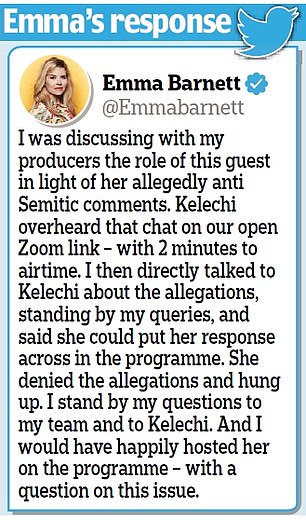 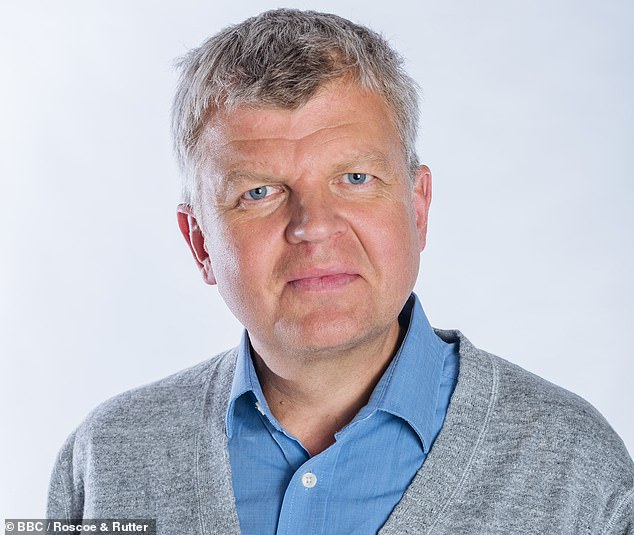 She said the programme was marking the anniversary of the start of the trial which ended with Hollywood mogul Harvey Weinstein being jailed for sexual assault and rape, and it had come to her attention that Miss Okafor had in the past made allegedly anti-Semitic comments.

Actress Kelechi Okafor was born in Lagos, Nigeria, before moving to the UK aged five where she was raised in South London.

In 2017, she was accused of anti-Semitism after she defended BBC star Reggie Yates when he was dropped from hosting Top of The Pops after making anti-Semitic remarks.

After Yates praised music stars for not being signed to ‘some random fat Jewish guy,’ Ms Okafor said in a now-deleted Apple podcast in 2017: ‘He [Reggie] is saying the truth and it just goes to show the power of a specific community that he can make a comment like that and everyone is like ‘whoa no, pull him from Top Of The Pops’. Why? Are these Jewish managers not from North West London? I want to know where the fallacy is?’

She added: ‘Black people in the entertainment industry have been short-changed so much by the kinds of people Reggie Yates describes.

‘Why are we not saying it as a form of truth. The fact is these men have dominated the industry for decades.  He didn’t say anything wrong. They are taking most of the profits.

‘Apart from the ‘fat part’ I don’t see what he said wrong. They [Jewish managers] like blackness as long as it is making them money.’

Ms Okafor studied at the Brit School of performing arts in London, specialising in musical theatre and English literature.

She has appeared in TV adverts for Maltesers, Samsung and Irn Bru as well as on stage.

She is the founder of the Kelechnekoff Fitness Studio in Peckham, south London which runs pole dancing and twerking classes for black women and non-binary people.

In 2017, Ms Okafor became the first black female contestant to appear on BBC’s reality series Special Forces: Ultimate Hell Week.  She eventually walked out of the competition because she was ‘frustrated’ with the way she said she was treated.

She told the Guardian: ‘They pieced things together that didn’t actually make sense in order to tell a story to the viewers. ‘Kelechi’s struggling, she’s frustrated, she’s arguing with this man.’ In reality, my frustration came from the fact that I had to walk on eggshells so as to not appear angry.’

In 2017 the actress came to the defence of BBC presenter Reggie Yates, who was dropped from Top Of The Pops for having praised grime stars for not being managed by ‘some random fat Jewish guy from north-west London’.

Yates subsequently apologised. Miss Okafor reportedly defended his comments in a since-deleted podcast, claiming Yates was ‘saying the truth’ and his comments were ‘not problematic’.

Miss Barnett said she had been sent a press report of what was said on the podcast.

With two minutes to the 10am airtime, Miss Okafor ‘overheard that chat on our open Zoom link’.

She ‘directly talked’ to Miss Okafor about the claims and said the actress could give a response on the programme. But she ‘denied the allegations and hung up’.

Miss Barnett said that Woman’s Hour is ‘a wonderful platform known for its robust journalism’.

Miss Okafor hit back, saying Miss Barnett’s statement had missed out all the ‘expletives used about me while the mic was thought to be muted’.

The End Violence Against Women Coalition, whose director Sarah Green was also a guest on the programme, condemned the way Miss Okafor was treated.

A tweet said: ‘I heard the appalling treatment @kelechnekoff was subjected to… it was really unfair. Woman’s Hour should apologise to her and really must do better.’

Miss Barnett grew up in an Orthodox Jewish family but is not observant. She was the target of anti-Semitic abuse from some Jeremy Corbyn supporters in 2017.

She replaced Dame Jenni Murray and Jane Garvey as the main Woman’s Hour presenter on Monday.

The BBC said Miss Barnett and her team had talked off-air about ‘how to reflect some of the guest’s alleged previous comments and the issue of anti-Semitism as part of the Woman’s Hour discussion on the role of minority voices in the MeToo movement. This was also raised directly with the guest before going on air.’

On Monday, the Queen issued a tribute to Woman’s Hour yesterday to mark the show’s 75th year as Miss Barnett began her first day as the programme’s main presenter.

The rare message from the monarch, who is known to be a regular listener, was read out by Miss Barnett as she took over from Dame Jenni Murray, 70, and Jane Garvey, 56.

It read: ‘As you celebrate your 75th year, it is with great pleasure that I send my best wishes to the listeners and all those associated with Woman’s Hour.

‘During this time, you have witnessed and played a significant part in the evolving role of women across society, both here and around the world. I wish you continued success in your important work as a friend, guide and advocate to women everywhere.’

Naga Munchetty has taken over the slot from Monday to Wednesday. 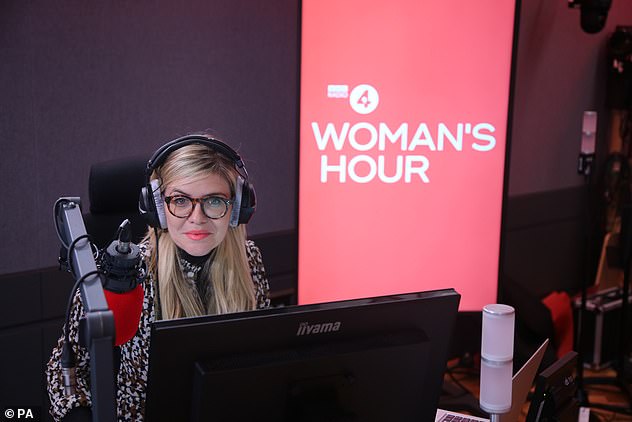 Miss Barnett (pictured on Monday), grew up in an Orthodox Jewish family but is not observant. She was the target of anti-Semitic abuse from some Jeremy Corbyn supporters in 2017 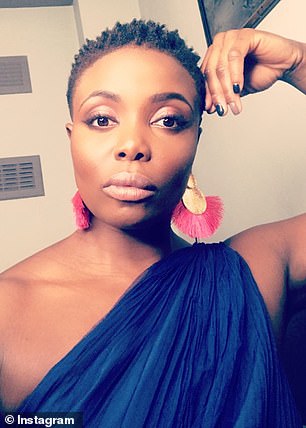 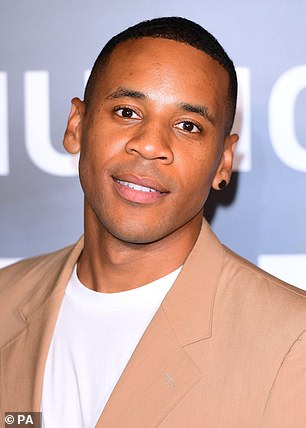 In 2017, actress Miss Okafor (left) came to the defence of BBC presenter Reggie Yates (right), who was dropped from Top Of The Pops for having praised grime stars for not being managed by ‘some random fat Jewish guy from north-west London’

Mr Chiles already hosted a mid-morning show on the station on Friday and now he also takes to the airwaves on Thursdays, from 10am to 1pm.

‘He has that unique ability to put listeners at ease and make them smile, whilst remaining relentless in his questioning of those in positions of power.’

Munchetty made her debut on Monday, promising her listeners they would soon ‘get to know each other’.

Her show featured interviews with the team behind the Oxford University-AstraZeneca Covid vaccine, the refugee housed by Gary Lineker, and pregnant woman expecting during the pandemic. Mr Chiles began his new role today.

END_OF_DOCUMENT_TOKEN_TO_BE_REPLACED

END_OF_DOCUMENT_TOKEN_TO_BE_REPLACED
Recent Posts
We and our partners use cookies on this site to improve our service, perform analytics, personalize advertising, measure advertising performance, and remember website preferences.Ok