Biden says Putin is getting 'desperate' with his nuclear comments

Biden says Putin is getting ‘desperate’ with his ‘idle comments’ on nuclear weapons and insists U.S. is ready for ‘whatever’ Russia does after Kremlin said Ukraine invasion is a war with NATO

President Joe Biden weighed in on Russian President Vladimir Putin’s nuclear saber rattling, as well as the Kremlin’s latest comments that the U.S. is fighting a ‘proxy’ war in Ukraine.

‘No one should be making idle comments about the use of nuclear weapons or the possibility of [their] being used. It’s irresponsible,’ he said at the White House.

Biden was asked at the White House Thursday if he was concerned about Putin’s latest comments about the U.S. posture toward Ukraine amid Russia’s invasion. Russia has protested U.S. arms shipments and support.

Biden announced an additional $33 billion in U.S. support on Thursday, as part of a broader effort to send arms, ammunition, and economic support.

‘They’re not true. They do concern me because it shows the desperation and rushes feeling about their abject failure in being able to do what they set out to do in the first instance,’ Biden said. 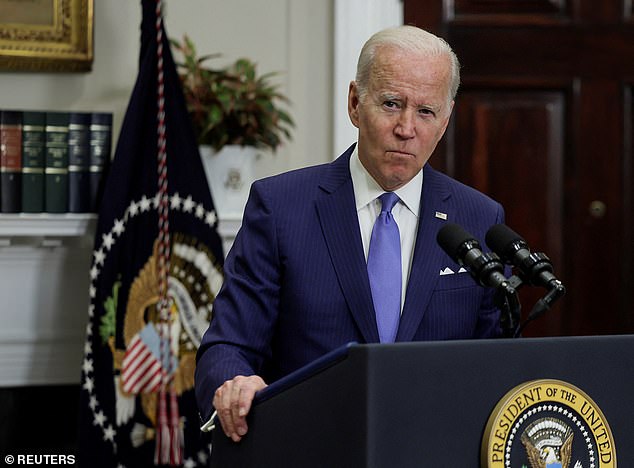 ‘No one should be making idle comments about the use of nuclear weapons or the possibility of [their] being used,’ President Joe Biden said at the White House Thursday

He also cast the Kremlin’s comments of a proxy war as disingenuous, despite a series of reports about U.S. intelligence and other assistance to the out-numbered.

Moscow seized on Defense Secretary Lloyd Austin’s comments in Germany this week that the allied effort would ‘weaken’ Russia, which U.S. security officials have long criticized as a malign actor on the world stage.

‘And so, I think it’s more of a reflection of the truth, but of their failure. And so instead of saying that the the Ukrainians are equipped with some capability to resist Russian forces doing this, they’ve got to say, tell the people the United States and all of NATO is engaged in taking out Russian troops and tanks etc.’

‘So it’s number one is an excuse for their failure. But number two, it’s also if they really mean it, it’s it’s …  no no one should be making idle comments about the use of nuclear weapons or the possibility of [their] being used. It’s irresponsible,’ he said.

He warned his response to anyone who ‘threatens’ Russia will be ‘lightning-fast’ and deadly.

‘If someone intends to interfere in what is going on from the outside they must know that constitutes an unacceptable strategic threat to Russia. They must know that our response to counter strikes will be lightning fast. Fast,’ he said.

‘We have all the weapons we need for this. No one else can brag about these weapons, and we won’t brag about them. But we will use them,’ he added.

He may have been referencing Russia’s new Sarmat 2 nuclear missile which was tested for the first time just days ago and that he boasted is unlike any other weapon in the world.

On Monday, Russian foreign minister Sergei Lavrov said Russia was fighting a proxy war with all of NATO and said the risk of it turning nuclear is ‘real.’

The comments came after Russia fired off diplomatic letters to Washington urging the U.S. to cut off military aid. The U.S. continued anyway, with Biden announcing a new $33 million package for Ukraine including $20.4 billion in additional security and military assistance.

Speaking to state TV, Lavrov said the current situation is worse than the Cuban missile crisis at the height of the Cold War because of a complete break-down in relations between the two sides.

Asked directly about the possibility of a nuclear war, he said: ‘The risks are very significant. I do not want the danger to be artificially inflated [but] it is serious, real. It cannot be underestimated.’