Gina McCarthy, who heads the White House office of climate policy, said Thursday’s meeting focused on job-creation as well as ensuring that agency leaders understood their role in helping to set an aggressive new target for cutting the United States’ share of global emissions. The Biden administration wants to announce those goals on April 22.

“Over the past four years we have not earned a lot of credibility on climate,” Ms. McCarthy, who led Thursday’s meeting, said in an interview, adding, “It’s time we turn that around.”

The National Climate Task Force, which Mr. Biden created as part of a series of executive actions during his first week in office, is meant to meet regularly to chart progress on a series of administration goals including eliminating fossil fuel emissions from the electricity sector by 2035; transitioning federal, state and local government fleets to zero-emissions vehicles; and increasing conservation while also increasing renewable energy production on public land and waters.

Mr. Biden campaigned on a pledge to reach net-zero emissions across the economy before 2050, and to eliminate fossil fuel pollution from the electricity sector by 2035. 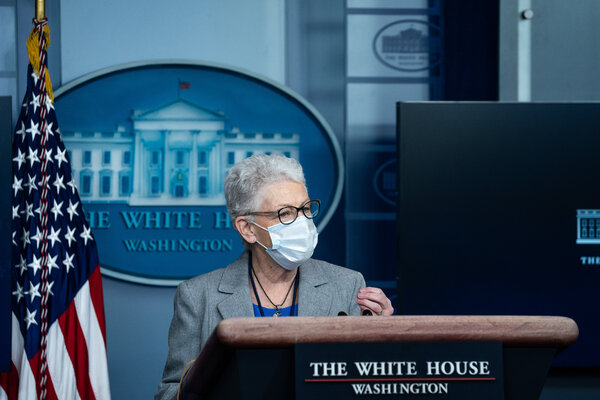 At Thursday’s meeting the task force started a new working group to focus on specific challenges, such as creating energy storage at a fraction of the current cost and developing sustainable fuels for aircraft and ships. The administration announced $280 million in combined Energy and Transportation Department grant opportunities for technology development.

The talks took place via Zoom among about 50 people, including Treasury Secretary Janet Yellen and Transportation Secretary Pete Buttigieg, as well as deputies for agencies still waiting for the Senate to confirm their leaders, such as the Environmental Protection Agency and the Interior Department.

Ali A. Zaidi, the White House deputy national climate adviser, said the goal was a “redefinition of the way government can operate in the face of great crises,” like climate change.

Former Secretary of State John Kerry, now Mr. Biden’s global envoy for climate change, spoke to the task force about the upcoming international negotiations in which the United States, which once again is part of the Paris Agreement, will take part.

The Obama administration pledged to cut America’s emissions up to 28 percent below 2005 levels by 2025. Former President Donald J. Trump withdrew from the Paris accord and ended all federal efforts to try to meet that target, leaving the country about halfway to the goal. Mr. Biden will be expected to put forward an even more aggressive goal that he believes the nation can meet by 2030.

The administration intends to announce that new emissions target at a global leaders’ climate summit that it will host on April 22.

“We’re going to look at every opportunity we have to capture the reductions we can defend,” Ms. McCarthy said.