An annual one-day beer festival which has raised tens of thousands of pounds for charity is facing the axe after a disgruntled local complained of ‘excessive alcohol intake’.

The Newbury Real Ale Festival, in Berkshire, supports local musicians and breweries and has donated more than £100,000 to charities since launching in 2003.

But the West Berkshire licensing authority is now carrying out a public survey before deciding whether to issue a licence for next year – after one resident said they can’t sleep due to the noise and complained of revellers using ‘abusive language.’

Thousands attended the event this September, when nearly 300 beers and ciders were on tap as well as a range of gins – and supporters said any mess was cleared by lunchtime the next day.

But the sole complainant reportedly says the much-loved event constitutes a public nuisance because of ‘excessive and continuous noise levels throughout the day and late into the evening’.

The objector also claims the event is potentially harmful to children living in the area who see people’s ‘excessive alcohol intake’, hear their ‘abusive language’ and can’t sleep at night because of the noise. 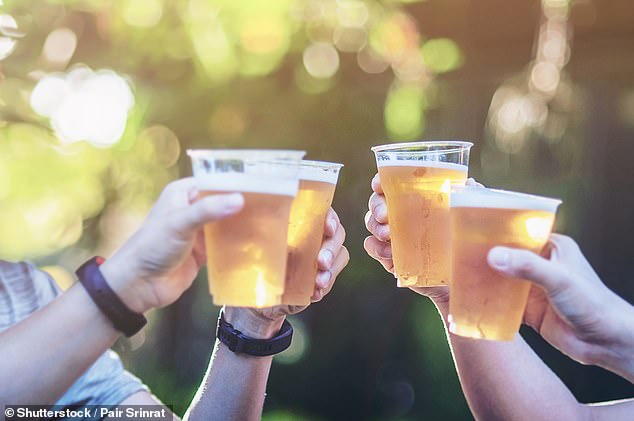 The Newbury Real Ale Festival, in Berkshire, supports local musicians and breweries and has donated more than £100,000 to charities since launching in 2003 (file photo)

Supporters of the festival have now launched a crowd-funding page to raise money to mount a legal challenge against the objection.

Their page says: ‘The Newbury Real Festival has been running for over 18 years successfully.

‘The event is cherished by many in the Newbury area. It is run completely by volunteers and now ranks as the largest single-day Real Ale Festival in the UK.

‘It is a NOT for profit event with all profits being shared between the organisers who are Newbury & Thatcham Hockey club who use the money to promote hockey in West Berkshire and nationally and several charities that are supported every year.

‘The festival is always considerate to the locals of Northcroft Lane and Newbury as a whole and the event is always fully tidied (no mean effort) by lunchtime the next day.

‘It takes a year to plan, a week to set up and 24 hours to dismantle.

‘It comes every year, it gives joy to thousands and like a footprint in the sand, it leaves without a trace, apart from goodwill and large charitable donations.’ 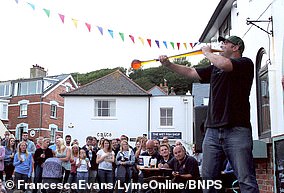 Locals in Lyme Regis, Dorset gather outside the Cobb Arms pub every year to see who can down a yard glass of beer in the quickest time

A traditional yard of ale drinking contest in a seaside town has been cancelled by the RNLI amid fears it could encourage binge drinking.

Locals in Lyme Regis, Dorset gather outside the Cobb Arms pub every year to see who can down a yard glass of beer in the quickest time.

The fun and popular competition is held as part of Lifeboat Week, a series of charity events to raise funds for the RNLI.

But the lifesaving charity has cancelled the yard of ale contest because it sent out the wrong message about drinking large quantities of alcohol near the water.

They also cited health and safety concerns about large crowds gathering in the road outside a pub for the event.

In 2006 Conger Coddling, that involved people knocking rivals off a wooden block by swinging a dead conger eel at them, was banned after 32 years following complaints of animal cruelty.

The pram derby, which saw teams of ‘mothers and babies’ race around a course drinking half pints at every pub on the route, was also cancelled due to health and safety fears.

Gary Valentine, landlord of the Cobb Arms, said: ‘This is the first I’ve heard about it being cancelled. The yard of ale contest is part of Lifeboat Week and is one of the highlights.

‘It attracts a huge crowd and we have never had any trouble or problems before.

‘Everyone stands outside to watch, half the road is closed for it.

‘There’s not many people that actually manage to drink the whole yard of ale anyway, the majority spill half of it down their shirts.

‘It’s a real shame. It has been going for at least ten years and this year’s was hugely popular.

‘I can’t see the logic behind it. It’s sad they’ve come to that decision.’

Chris Higgs, the reigning yard of ale champion who drank his yard in 9.5 seconds, said: ‘Such a shame about the news of losing the last true lifeboat week event. I am proud to say I’m multiple time and reigning champion.

‘It was so great this year to see so many new faces having a go and such a great atmosphere.

‘Let’s hope this isn’t the end of another great Lyme tradition.’

Local resident Lisa Blake posted online: ‘How did we ever survive our childhood and teenage years? PC attitude has gone bonkers.’

The Lifeboat Week has been held in Lyme Regis every summer since the early 1970s.

The 2020 event had to be cancelled due to the pandemic, and so this year’s celebrations proved hugely popular.

This year’s event raised £36,000 for the RNLI and the yard of ale competition attracted a record number of 25 people taking part.

Until now, the RNLI had backed to yard of ale event.

But a spokesperson said it was no longer appropriate for the lifesaving charity to support it.

They said: ‘The decision to remove an event called a ‘Yard of Ale’ from the programme of events included in the Lyme Regis Lifeboat Week was made after considering the safety of large crowds gathering in the road outside a public house.

‘In addition, the RNLI has always been an advocate for responsible use of alcohol on or around water and no longer felt that it was appropriate to encourage the consumption of large quantities of alcohol at an event raising funds for the lifesaving charity.’