Wine, who is bidding to unseat Uganda’s long-time leader, was dragged from his car by police.

NBS Television said the singer, whose real name is Robert Kyagulanyi Ssentamu, was taken into a police van amid violent scuffles between officers and his supporters.

Authorities have frequently accused Wine of planning rallies that could disrupt public order, which he has denied.

Critics say President Yoweri Museveni, in power since 1986, increasingly depends on the armed forces to assert his authority. 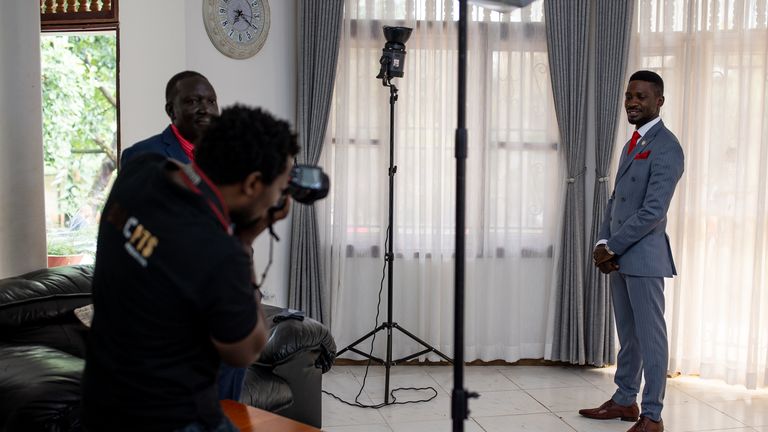 And on Monday, as the incumbent was nominated again as an election candidate, he warned that anyone disturbing the peace would regret their actions.

He said: “There’s nobody who is going to disturb here. Whoever tries will regret. Because for us, we don’t play.

“The [ruling party] fought to bring peace in this country. Nobody has more guns than us. But we don’t scare people.”

The electoral commission has not fixed a date for the polls.

Wine, 38, has captured the imagination of many Ugandans with his persistent calls for Mr Museveni, 76, to retire. He is especially popular with those from poorer urban areas.

The musician wrote a song in the early days of the pandemic encouraging people to wash their hands, and has built up a following among Uganda’s younger voters – about 75% of the population is below the age of 30.

“We now enter the most critical phase of our liberation struggle!” he tweeted after having his candidacy certified.

Wine and other opposition leaders have been frequently arrested in recent years – sometimes in their own homes, by police claiming they are preventing crimes from being committed.

The east African nation has never witnessed a peaceful transfer of power since its independence from British colonial rule in 1962.

END_OF_DOCUMENT_TOKEN_TO_BE_REPLACED

END_OF_DOCUMENT_TOKEN_TO_BE_REPLACED
Recent Posts
We and our partners use cookies on this site to improve our service, perform analytics, personalize advertising, measure advertising performance, and remember website preferences.Ok