Home » World News » Boris Johnson enjoys a rare outbreak of unity, but his real test is ahead

Boris Johnson enjoys a rare outbreak of unity, but his real test is ahead

London: At Easter, the British Prime Minister was discharged from hospital and admitted he'd been near death from his bout of coronavirus.

Boris Johnson's hospitalisation was a personal nadir in what can only be described as his annus horribilis. 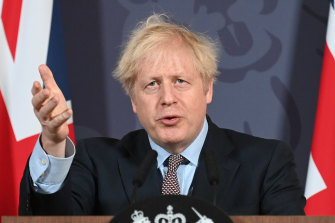 “We’ve taken back control of our laws and our destiny,” Johnson said at 10 Downing Street.Credit:AP

All governments have endured a year to forget thanks to the pandemic but it has come at the worst possible time for Britain, which had allocated 2020 to resolving its Europe problem.

Instead, the government has been forced to use most of its bandwidth to respond to the pandemic, while the clock ticked on its self-made Brexit crisis.

Here Britain faced the dual calamity of its economy shut down for most of the year and the prospect of a no-deal Brexit to continue the economic ruination.

Last week French President Emmanuel Macron gave the country a bitter taste of what that might look like when he shut the Eurotunnel, causing a backlog of 5000 trucks at the Port of Dover and sparking fears of food shortages.

So it was no surprise that leaders expressed sheer "relief" as the Christmas Eve breakthrough came. "The only bright spot in a dreary Christmas," one Tory MP texted.

Johnson donned a fish-patterned tie for his victory news conference. Fishing rights had become a totemic sticking point in the negotiations. 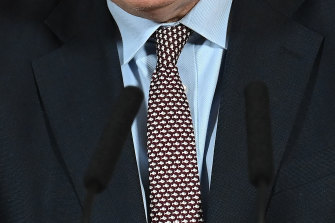 Boris Johnson wore a tie covered in fish to announce the Brexit deal.Credit:AP

"There have been plenty of people who have told us that the challenges of the COVID pandemic have made this work impossible and that we should extend the transition period and incur yet more delay," Johnson said.

"I rejected that approach precisely because beating COVID is our national number one priority and I wanted to end any extra uncertainty and to give this country the best possible chance next year."

Johnson issued a photograph of himself sitting at his desk, arms raised in triumph, to announce the deal. If it looked hubristic, remarkably it was Johnson's critics who were first to congratulate him, including his two predecessors, David Cameron and Theresa May, whose careers both ended over Europe.

"The deal is not perfect but it is a big moment," he said.

"This victory is a tribute to the ordinary men and women who stood up against the Westminster establishment – and won. There is no going back."

The coming days will expose all the things Britain will lose as a result of leaving the single market, with services likely to be the biggest concern. January 1 is also likely to bring with it significant teething problems, particularly at customs.

The outbreak of unity belies how Brexit-weary both Europe and Britain have become since the vote in 2016, which Johnson rightly said had "bedevilled" British politics.

Labour will vote for the deal, as will the bulk of Johnson's MPs when it is presented to the Commons on December 30.

One of those voting in favour will be former minister Tobais Ellwood, the chair of the Commons' Defence Committee and a prominent remainer who has been among those urging Johnson to extend the transition period if a deal was not reached for January.

"It's been a long and difficult journey that's both polarised and distracted the nation," Ellwood told The Sydney Morning Herald and The Age.

Leaving aside the giant issues of seeing through the trade deal and the changes to take effect in just eight days combined with the pandemic, Ellwood says Britain has other global challenges to tackle, including climate change and global security.

"It's time to get behind the PM and support this trade deal and allow us to re-engage on the international stage as we assume the Presidency of the G7 and hold the critical summit on climate change," he said.

And he says there are lessons for both sides: for Britain, don't hold referenda with open-ended questions; and for Europe, flexibility early on might have prevented the scarring divorce.

Europe, he said, needed an urgent debate about its own future, "or other nations will follow suit".

He is right. For her part at least, the European Commission's President Ursula von der Leyen put up a strident defence.

"It is about pooling our strength and speaking together in a world full of great powers," she said in Brussels.

"And the European Union shows how this works in practice and no deal in the world can change reality or gravity in today's economy and today's world, we are one of the giants."

This cultural reordering of politics to which von der Leyen alludes, first exposed in Britain through Brexit, is deep and long-lasting; Brexiteers have morphed into anti-lockdown voices as well as China-hawks.

Johnson rode to success on the back of the political realignment and has delivered, ending a year in which he has beaten death, fathered another child and breathed life back into his own premiership, battered by his shambolic management of the pandemic.

He can enjoy the rare outbreak of unity this Christmas. His biggest test will come next year as the Brexit project finally moves from slogan to reality and we will truly see whether a Britain, freed from the "giant" of Europe, will stumble or rise.

END_OF_DOCUMENT_TOKEN_TO_BE_REPLACED

END_OF_DOCUMENT_TOKEN_TO_BE_REPLACED
Recent Posts
We and our partners use cookies on this site to improve our service, perform analytics, personalize advertising, measure advertising performance, and remember website preferences.Ok