Boris Johnson says people should ‘be more positive about Brexit’

Boris Johnson has said he wants to ‘start being a bit more positive about Brexit’ as he vowed that Britain would leave the EU’s customs union ‘well before the next election’.

The Tory frontrunner said preparations for a No Deal Brexit on October 31 would be ‘invaluable’ even if a cliff-edge exit did not take place, as Britain would eventually need to leave the customs union anyway.

However, he said he would still prefer to preserve a ‘zero-tariff, zero-quota’ arrangement, a so-called ‘standstill’ agreement, after Britain leaves the EU in order to ‘smooth things over for business’.

Mr Johnson spoke to ITV’s Robert Peston in an interview broadcast tonight, as the Tory leadership race enters its final stages with the winner – and new UK Prime Minister – set to be announced on Tuesday morning. 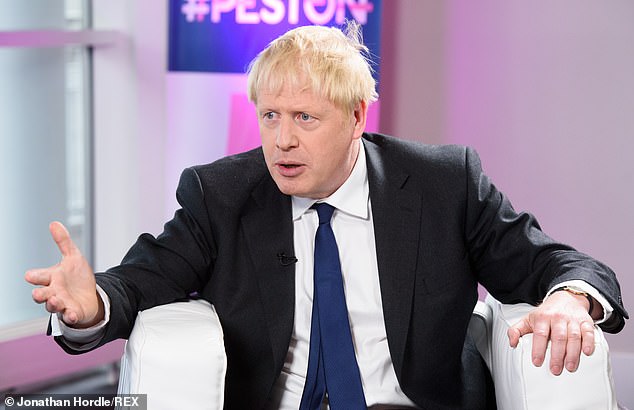 Favourite: Tory frontrunner Boris Johnson (pictured during an interview with Robert Peston) said preparations for a No Deal Brexit on October 31 would be ‘invaluable’ even if a cliff-edge exit

‘What will happen at some point in the next couple of years is that we will have to come out of those arrangements finally,’ he said.

‘On October 31, we leave the EU’s legal order. What you might do is protract the current zero-tariff, zero-quota arrangements so as to smooth things over for business.

‘But the reason it’s so important to prepare for a no deal where you come out whole and entire on October 31 is that whatever happens in the next few years we’re going to have to make that kind of adjustment.’

Brussels has said it will not renegotiate the deal it agreed with Theresa May, which included a transitional period.

However, that deal was rejected three times in the House of Commons.

Asked when Britain might leave the customs union, Mr Johnson said: ‘I wouldn’t want to go any longer than necessary, we’ve got to come out well before the next election.’

The next election is due in 2022, although there has been frequent speculation about an early poll. 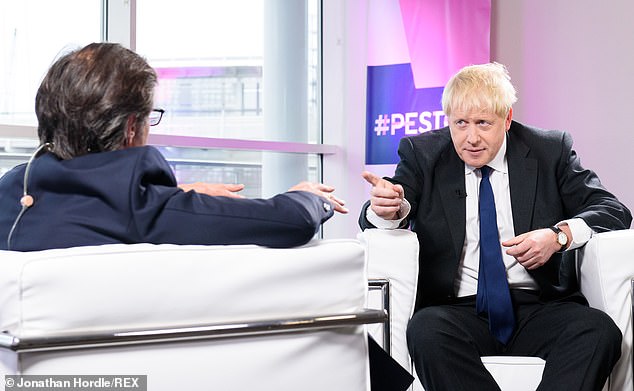 Making his point: Boris Johnson speaks to ITV’s Robert Peston (pictured in London) in the final stages of the Tory leadership race

The Tory government could be brought down in a confidence vote, as Conservative MP Dominic Grieve has threatened to do if the new PM pursues No Deal.

It has also been claimed that Mr Johnson could initiate a new election himself once Brexit is over the line so that he can face off against Labour while a beleaguered Jeremy Corbyn is still opposition leader.

Tonight Mr Johnson also promised a major public information campaign to educate the public about No Deal, including the effects on agriculture and fishing.

Calling Brexit a ‘big opportunity’, he said: ‘It’s about time we started thinking about that opportunity and started being a bit more positive.

Once Britain has left ‘the work can begin on launching a global Britain, to start thinking about ways in which we can really boost the UK economy’, he said.

‘Think of the ways that we could start diverging if necessary from the EU rules on bioscience or financial services, areas in which we happen to be very strong, we’ll be able to start thinking a bit differently.’ 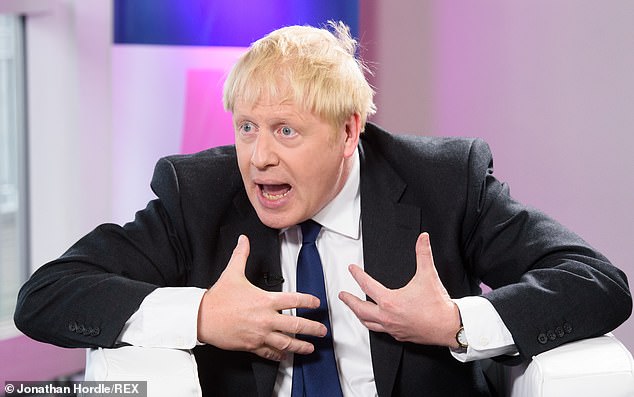 Will it be me? Boris Johnson will find out on Tuesday whether he or Jeremy Hunt will replace Theresa May as Prime Minister

Peston also asked Mr Johnson about his privileged background, educated at Eton and Balliol College, Oxford – to which Boris pointed out that Peston himself had gone to Balliol.

‘What I want to do is to level up opportunity around the country,’ he said, citing a falling murder rate while he was mayor of London.

Earlier this evening he brandished a smoked kipper on stage at a leadership debate to complain about EU food rules.

Mr Johnson waved the fishy breakfast treat as he addressed thousands of party members at the Excel Centre in London.

He claimed a kipper smoker on the Isle of Man –  which is not part of the European Union – was ‘utterly furious’ because apparently his costs had been increased by EU rules he said mean each fish must be accompanied by a plastic-wrapped ice pillow.

Several thousand people were in the audience, making it the largest of all the 17 party hustings held before the winner is revealed next Tuesday. 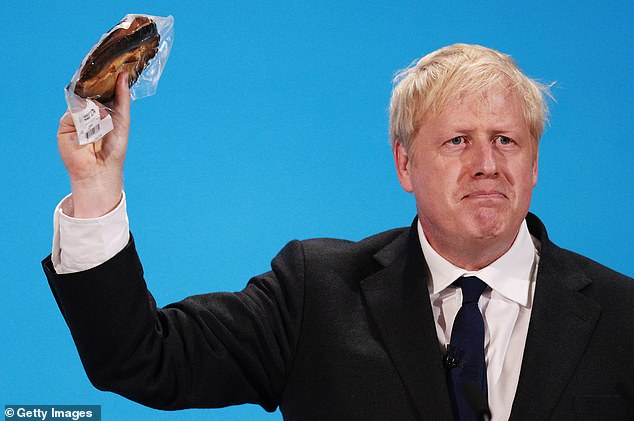 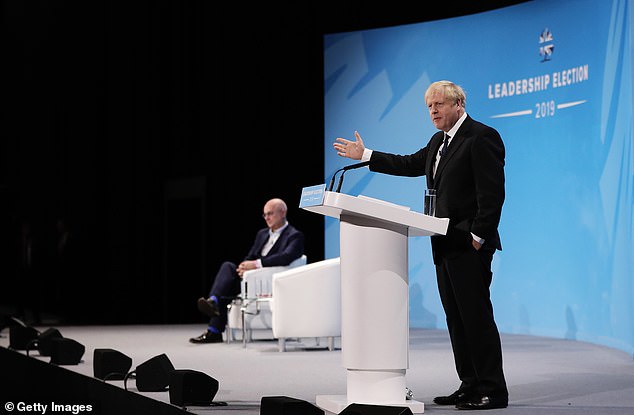 After the slapstick moment Mr Johnson failed to answer questions on whether he would shut down Parliament to sideline MPs and achieve a No Deal Brexit on October 31.

Boris rejects claim that he dyes his hair blonde

Tory MP David Morris, a former hairdresser who has been a critic of Mr Johnson, said the green tinge in photos of the leadership front-runner on stage suggested he had been ‘evening out’ the colour.

A celebrity stylist also told MailOnline he could be using ‘ash toner’ to ‘clean up’ his hair.

Mr Johnson, 55, has previously sparked speculation about how he maintains his trademark mane.

In 2016 he said in a magazine interview that he dyed his hair. However, he later insisted he had been joking.

But asked about his shaggy coiffure at the hustings tonight he said: ‘No, never. I don’t usually answer personal questions but it is an outrageous suggestion.’

But after the slapstick moment Mr Johnson failed to answer questions on whether he would shut down Parliament to sideline MPs and achieve a No Deal Brexit on October 31.

Reports have suggested that he is considering calling a Queen’s speech in November, which would see Parliament rise before the Halloween deadline to leave the EU.

Asked when he would bring in a Queen’s Speech if he becomes prime minister, Mr Johnson said: ‘I am not going to comment on our programme.’

The front-runner was introduced by Treasury Secretary Liz Truss, which will fuel claims that he intends to make her chancellor if he enters Number 10.

She described the 55-year-old Old Etonian and Oxbridge graduate as a ‘freedom fighter’ and an ‘insurgent’.

Mr Johnson was today facing huge pressure to rule out suspending Parliament to force No Deal – as a close ally warned they would withdraw their backing.

Former Cabinet minister Andrea Leadsom said she would not go along with a move by a new PM to prorogue the Commons at a crucial point in the Brexit process.

Mrs Leadsom, a former Commons leader, said: ‘I don’t think that prorogation is the right thing to do and I don’t think a prime minister would choose to do that.’

Asked if she would go along with it if Mr Johnson took that course of action, she told BBC Radio 4’s Today: ‘No, I don’t believe I would and I don’t believe it will happen.’ 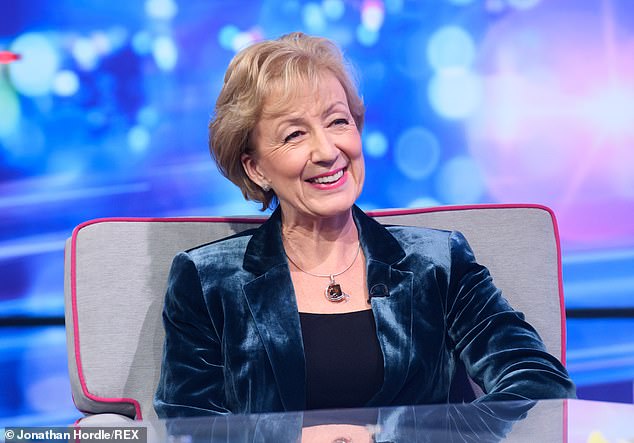 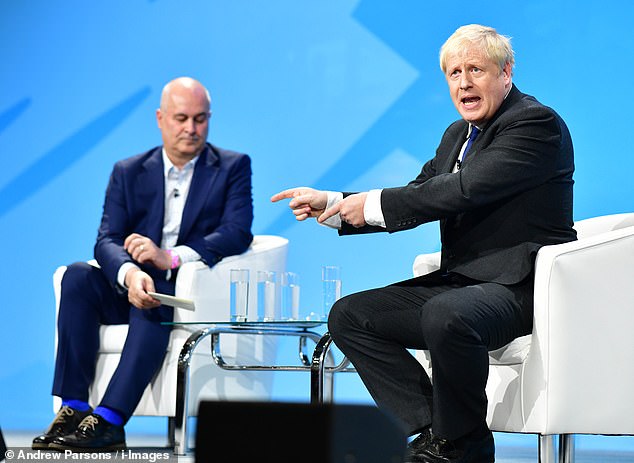 Mr Johnson also ruled out working with Nigel Farage’s Brexit Party at an election, saying the Conservatives did not need to do deals 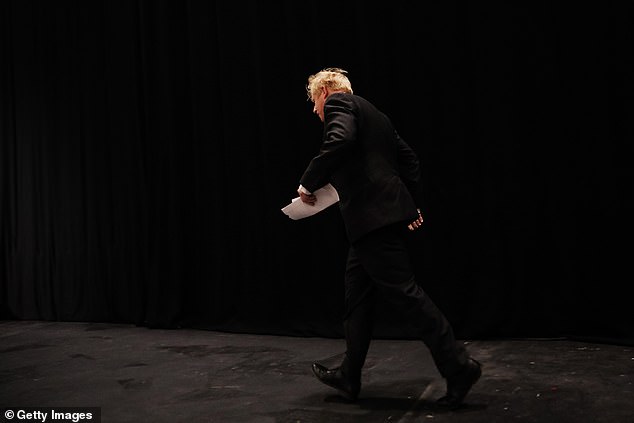 Asked when he would bring in a Queen’s Speech if he becomes prime minister, Mr Johnson said: ‘I am not going to comment on our programme’ 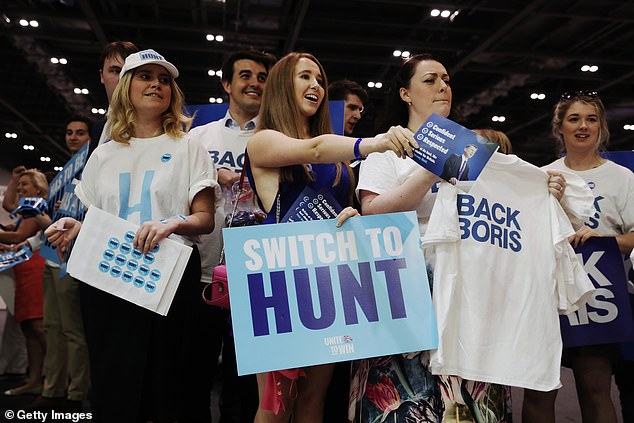 Several thousand people were in the audience, making it the largest of all the 17 party hustings held before the winner is revealed next Tuesday 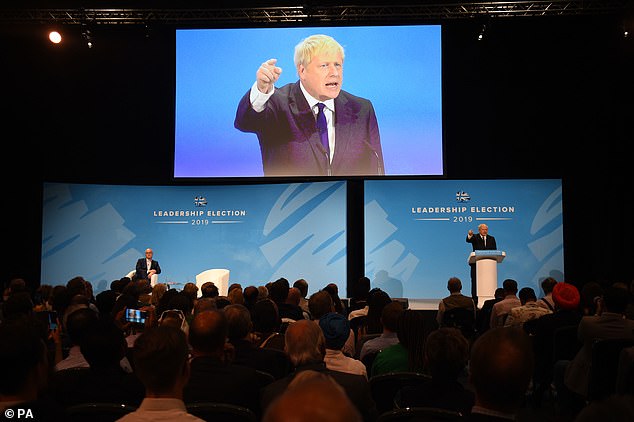 Mr Johnson also ruled out working with Nigel Farage’s Brexit Party at an election, saying the Conservatives did not need to do deals. 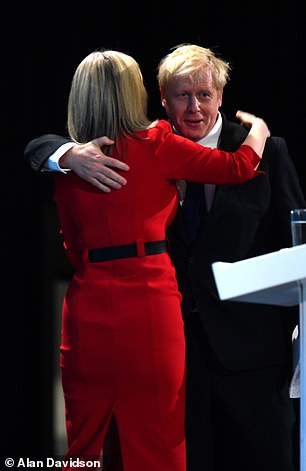 The front-runner was introduced by Treasury Secretary Liz Truss, which will fuel claims that he intends to make her chancellor if he enters Number 10

He admitted meeting the right-wing populist but subsequently heckled about doing a political pact he shouted back: ‘yes I rule it out.’

Mr Johnson was unable to firmly tell Tory members whether he is good with money.

Having answered a question on helping young children to manage money, LBC presenter and hustings moderator Iain Dale said to Mr Johnson: ‘Are you good at managing money?’

‘What can I say, I’ve certainly spent a lot. Yes.’

Mr Dale said: ‘If you’re going to be First Lord of the Treasury then you need to be quite good at managing money, I would have thought.’

END_OF_DOCUMENT_TOKEN_TO_BE_REPLACED

END_OF_DOCUMENT_TOKEN_TO_BE_REPLACED
Recent Posts
We and our partners use cookies on this site to improve our service, perform analytics, personalize advertising, measure advertising performance, and remember website preferences.Ok