The Prime Minister and Chancellor Nadhim Zahawi have given the go-ahead for financing for the construction of the Sizewell C nuclear reactor in Suffolk, sources have confirmed.

Private funding will be sought for the project will cost between £20 and £30 billion. The Government is then set to make a final decision on public investment early next year, with it expected to buy a 20 per cent stake in the plant, costing up to £6 billion.

The approval comes as energy prices are skyrocketing across the country. Households have been warned that energy bills could hit a massive £3,615 this winter, according to energy consultant Cornwall Insight.

Mr Johnson – who has essentially been a caretaker Prime Minister after being forced to resign over a succession of scandals – previously said he would not be making major decisions before leaving office. But senior government sources allege he and Mr Zahawi decided to fund the projects week ago without telling the other ministers.

The move has triggered concern among some of Liz Truss’s allies that it could limit her economic vision. Analysts predict the Foreign Secretary, who has an unassailable lead among Tory members, is almost certain to be next prime minister. 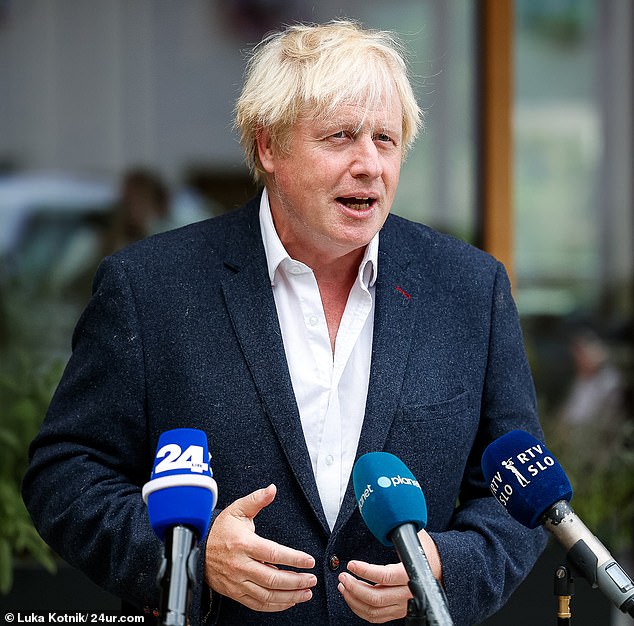 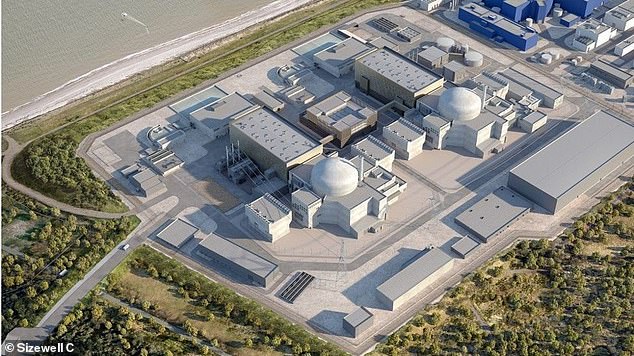 Ms Truss, the frontrunner to replace Mr Johnson on September 6, has pledged tax cuts, including a reversal of the national insurance hike costing at least £30 billion per year.

However, she is under growing pressure to offer further support to the most vulnerable, as experts warn the energy price cap could surpass £6,000 in April in a further painful hike.

Business Secretary Kwasi Kwarteng, who is tipped to be Ms Truss’s chancellor if she wins the Tory leadership race, is said to be ‘massively’ on board with the plan to Sizewell C nuclear plant.

Mr Kwarteng, in an article for the Mail On Sunday, promised ‘help is coming’ but insisted it is ‘entirely reasonable not to detail the exact shape of that support’ until later.

He also stressed the need to ‘crack on with more nuclear power stations’ in order to increase Britain’s energy security.

But his camp did not appear to be united on the issue, with Chief Secretary to the Treasury Simon Clarke raising concerns with Mr Johnson and Mr Zahawi.

In a letter leaked to the Sunday Times, Mr Clarke suggested that acting now would tie the hands of their successors.

Mr Clarke, who is expected to get a senior Cabinet job if Ms Truss wins, said the costs of Sizewell C are ‘sufficient to materially affect spending and fiscal choices for an incoming government, especially in the context of wider pressures on the public finances’. 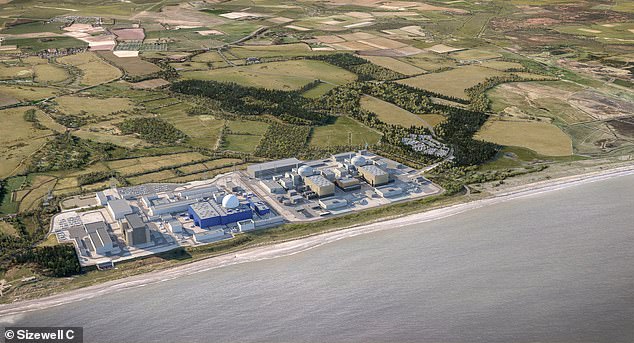 Private funding will be sought for the project will cost between £20 and £30 billion. The Government is then set to make a final decision on public investment early next year, with it expected to buy a 20 per cent stake in the plant, costing up to £6 billion 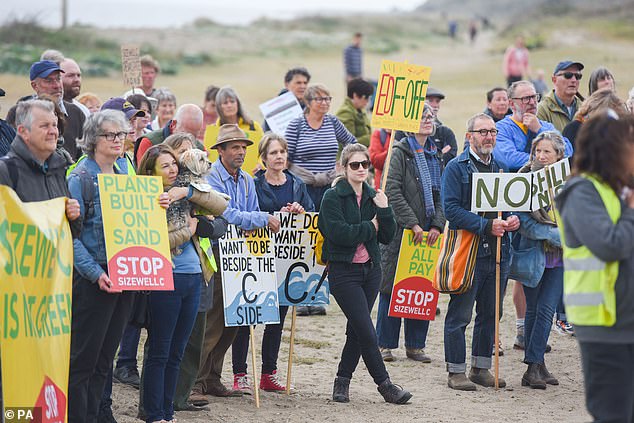 Development consent for Sizewell C was given the go-ahead in July, but negotiations over the financial investment decision were said to be ongoing. Protesters are pictured in May 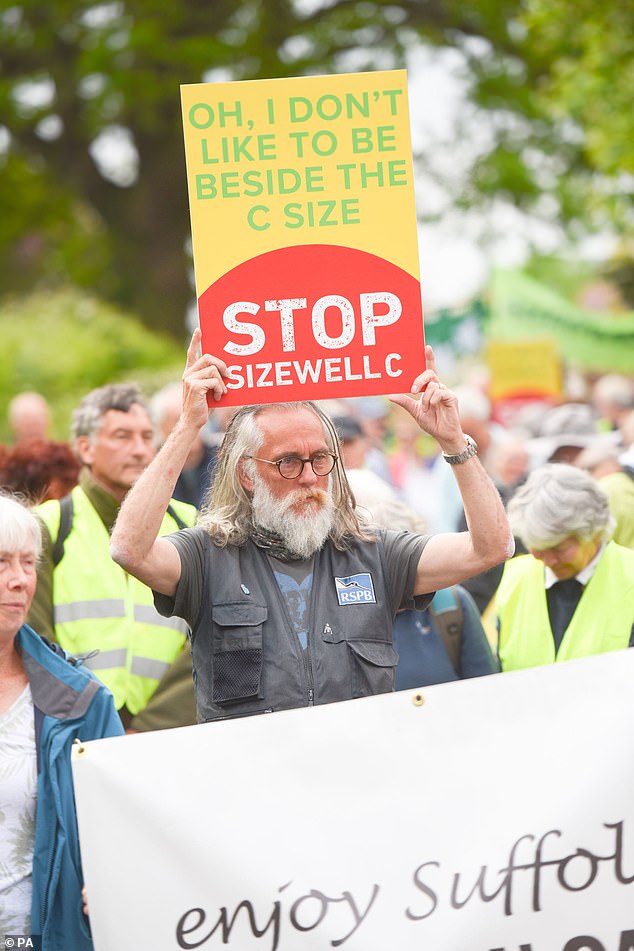 Development consent for Sizewell C was given the go-ahead by Mr Kwarteng in July, but negotiations over the financial investment decision were ongoing.

‘Nuclear power has a key role to play as we work to reduce our reliance on fossil fuels and exposure to volatile global gas prices,’ a Government spokesperson said.

‘Negotiations are still ongoing on Sizewell C and as these are active and commercially sensitive discussions we cannot comment further.’

‘The decision has been taken in principle. The PM is very keen on it,’ a senior official told The Sunday Times.

The decision was also met with negative response from the Stop Sizewell C campaign group who, according to their website, believe building two new nuclear reactors at the Sizewell plant in east Suffolk will have a ‘devastating impact on this unique and magical place.’

The group also believes the nuclear plant is ‘too slow and expensive compared to alternatives in the fight against climate change.’

‘Whatever way you look at it, this is a very dodgy decision,’ the Stop Sizewell C campaign group said in a statement on Sunday. ‘Has it been made by a lame duck PM who is not supposed to tie the hands of his successor, or was it in fact made before Sizewell C was granted planning consent, lending serious weight to our conviction that this was a prejudiced, political decision?

‘Our next prime minister should call Sizewell C in: there are so many better ways to spend billions of pounds of taxpayers’ money than on a project that won’t light a single lightbulb for at least a decade.’

The energy supplier also claimed the project will help cut back on nine million tonnes of carbon emissions each year.

It is unclear exactly how the plant will impact the cost of residents’ energy bills following its competition, but during construction it is expected to add an extra £1 per month to household bills to aid in building costs, The Guardian reported.

The possible £1 hike comes as experts predict energy bills could reach extreme highs in the new year – worth hundreds of pounds more than previous predictions.

Last month, Cornwall Insight predicted that annual energy bills would typically rise to £3,244 from October and £3,363 from January, but circumstances have changed significantly since then, adding yet more pressure to families already struggling.

The company told BBC Breakfast earlier this month that such a bill is now likely to rise to £3,358 from October and £3,615 from January. 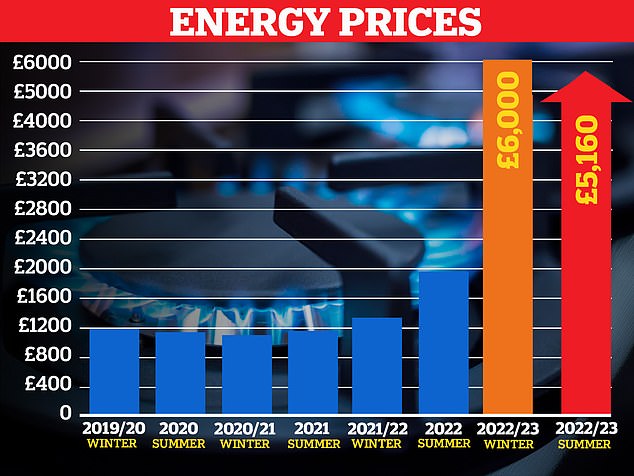 Experts also fear energy bills for the typical family could reach £6,089 a year by next April

The increase represents a huge jump from October 2021, when the average bill was £1,400, before the price cap – the maximum amount suppliers can charge customers for average energy usage – then rose to £2,000.

Charity National Energy Action last month predicted that, should the average bill reach £3,250 per year, 8.2 million UK households will be in fuel poverty, or one in three.

Experts also fear energy bills for the typical family could reach £6,089 a year by next April. The figure, released by energy consultants Auxilione on Friday, represents a five-fold increase on where bills were until April this year, before wholesale prices took off and the price cap began to spiral.

Since then, gas prices have spiked to levels never seen before, as Vladimir Putin’s regime slashed supplies. Hard-pressed families are struggling with bills and face the prospect of more rises over the winter.

It is feared millions will be unable to pay bills over the next year, unless Ministers increase the current £400 they’ve promised households as a discount.

Those who get into debt could be moved to prepayment meters (PPMs) – where they have to pay in advance for gas and electricity, plus pay extra each time they top up to pay off the money owed.

The price cap hike comes with Britain in the grip of a cost-of-living crisis, with inflation hitting ten per cent and interest rates rising.