Homicide squad detectives have charged a 15-year-old boy with murder following the fatal stabbing of a man in South Yarra last week.

A police spokeswoman said the teenager was arrested in South Yarra on Friday morning. 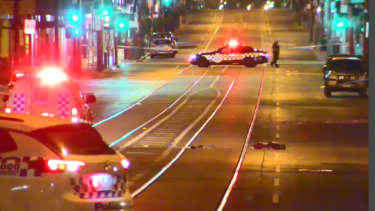 Detectives block off the scene where a man was fatally stabbed on Friday nightCredit:Nine News

The charges come a week after 40-year-old Prahran man was attacked while on Malvern Road, near the intersection of Essex Street, shortly after 11pm on September 18.

The injured man was taken to hospital where he died.

It prompted police to issue an appeal for the rider of a motorised scooter and the driver of a white van, who were both captured on CCTV on Malvern Road at the same time as the teen, to come forward.

The footage showed the scooter rider striking the teen after he steps in front of it, while the white van drives past the teen and the victim during their altercation.

Police are still looking for those two people and appealing for them to come forward.

Anyone with information on the South Yarra death is urged to contact Crime Stoppers on 1800 333 000 or submit visit crimestoppersvic.com.au.

END_OF_DOCUMENT_TOKEN_TO_BE_REPLACED

END_OF_DOCUMENT_TOKEN_TO_BE_REPLACED
Recent Posts
We and our partners use cookies on this site to improve our service, perform analytics, personalize advertising, measure advertising performance, and remember website preferences.Ok