Home » World News » Boy is declared 'a hero' after antics

Boy is declared 'a hero' after antics

A young boy has become the unlikely star of a weather forecast after his comical antics were caught on live television.

Viewers were left in hysterics today after the young boy, decided to crash BBC news reporter Jen Bartram’s live beach report from South Shields and display an array of entertaining moves in the background.

Following the live broadcast, Ms Bartram took to Twitter to write: ‘I was unaware of being upstaged by the young boy with some rather enviable dance moves during my forecast.’ 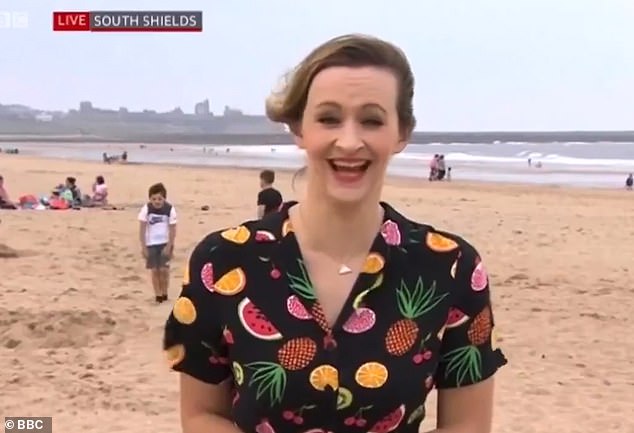 During the clip, the news reporter tells viewers the weather has become ‘pretty chilly’ in the coastal town and warms of a really brisk breeze travelling from the south east.

Within seconds, the young boy, who has since been hailed a ‘hero’ by social media users, appears in the background and begins to display his comical moves after spotting the camera.

He turns around to continue with his entertaining dance moves before running off into the distance.

Following the incident, the BBC news reporter took to social media to praise the ‘real star’ of the weather report and share a clip of the young boy’s antics. 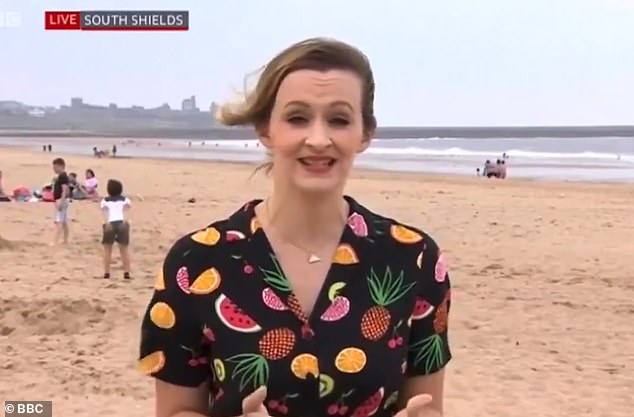 Following the incident, the news reporter took to social media to praise the ‘real star’ of the weather report

Taking to Twitter Ms Bartram wrote:  ‘Here he is. Never mind me: the real star of the weather forecast was the dancing kid.’

The post has since been met with an array of comments from amused social media users, with one hailing the boy a ‘hero’.

One viewer commented: ‘Haha, right little diva trying really hard to upstage your fruit cocktail top Jen!’ while another added: ‘That was hilarious.’

Another person commented: ‘This kid is my new hero.’

Elsewhere another person said: ‘Fantastic shirt lifting from the boy there.’

Social media users shared their amusement with the clip, with one describing the scene as ‘hilarious’

The comical scenes comes after John Nicolson, MP for Ochil and South Perthshire, saw his cat make a hilarious appearance and block the camera with his tail during a Zoom interview with the Digital, Culture, Media and Sport Committee this month.

The committee had been hearing from Dame Carolyn McCall, chief executive of ITV, about the future of public service broadcasting in the wake of the coronavirus health crisis when an orange tail appeared on screen.

In 2017, Robert Kelly, an associate professor of Political Science at Pusan National University in Busan, was speaking on BBC news when his toddler burst into the room.

Seconds later a baby was seen making his way into the room in a walker as Mr Kelly tried to continue with his interview.

Mr Kelly’s wife Jung-a Kim was then filmed skidding through the threshold and pulling the two children away from the room.

END_OF_DOCUMENT_TOKEN_TO_BE_REPLACED

END_OF_DOCUMENT_TOKEN_TO_BE_REPLACED
Recent Posts
We and our partners use cookies on this site to improve our service, perform analytics, personalize advertising, measure advertising performance, and remember website preferences.Ok