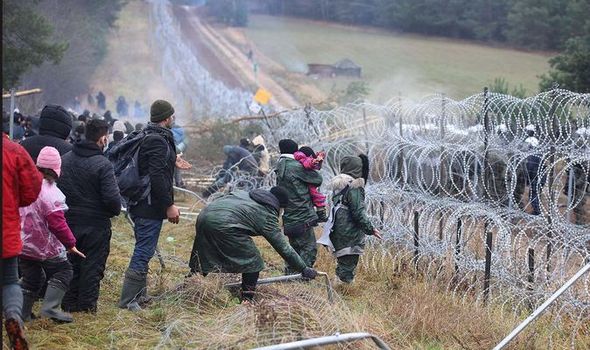 Some 4,000 mostly Middle Eastern migrants are amassed in woodlands along theBelarus-Polish border following reports that the state’s leader, Alexander Lukashenko, is deliberately ”weaponising” migrants in a bid to destabilise the EU.

Belarus Special Forces are known to have been ushering migrants through specific passes along the 250-mile frontier.

So far, the UK has been the only ally to deploy troops to assist Warsaw, though diplomatic calls between Warsaw and the Nato Council this weekend should see troops from the US and Germany, which are already based in Poland, also diverted to assist.

Around a dozen Royal Engineers were sent to Poland, tasked with advising the government about technical modifications to make the border more secure.

Britain also has around 150 troops in the country to support US forces as part of its commitment to Operation Cabrit, Nato’s Enhanced Forward Presence.

Whitehall sources say that diverting regular combat troops to border duties is currently seen as “too provocative”, and Poland – which has 30,000 border guards and police on active duty – is also resisting using regular Army forces.

Poland has deliberately used Nato to muster support because EU rules say that member states can only receive help if they can not cope with a crisis.

“Doing this would would give Russia the signal that Poland is unable to deal with this crisis. That would be taken as a clear sign of weakness by the Kremlin and prompt further escalation,” warned Sławomir Dębski, director the Polish Institute of International Affairs think-tank last night.

But escalation may be just around the corner, experts warned, after 600 Russian and Belarusian paratroopers dropped just 70 miles from the Polish border in what Nato commanders say was a clear demonstration of political and military intent.

Last night 90 Russian soldiers from the 45th Spetsnaz Brigade along with 60 Belarusian and 20 Kazakh troops mounted a free-fall parachute insertion at night from three Russian aircraft.

Both Russia and Nato have deployed spy planes to monitor each other and Nato commanders have sent an ‘alert’ to all warships to avoid stand-offs with Russian naval vessels.

Sanctions were imposed on Belarus after this summer, after it detained opposition activist Roman Protasevich, whose flight was diverted to Minsk under the pretense of a bomb threat.

“This is a rogue state which unleashed the first wave of migrants just after the first package of sanctions were imposed in the summer,” said Viktorija Starych-Samuoliene of the Council of Geopolitics think tank.

“We never imagined this crisis would escalate to this extent, and it is continuing to escalate further.

“The UK has taken a good step to provide military assistance – it is really critical to show we support allies and partners and that we’ll be there when needed.

What is happening where you live? Find out by adding your postcode or visit InYourArea

“But we must be prepared to support them militarily if it escalates further. “

Parallel events in Ukraine have the situation “hot” she added.

Intelligence reports claim more than 85,000 Russian troops are on exercise near Ukraine.

“It is also important to note the military build up by Russian forces in Ukraine. The situation is very hot and very tense.

“The alarm is growing in Western capitals. We cannot be complacent.”

Around 11 migrants are said to have died in the forests around the border as winter temperatures begin to fall.

But a further 4,000 were reputedly making their way to the frontier to join others already there.

Though Lukashenko has offered to supply them with firewood, the expected cold snap could cause a temporary end to the crisis, said

“The snow makes it impossible to cross the border, even if migrants could withstand the sub-zero temperatures,”said Dębski.

“So winter could see this crisis abate – for now, at least.”

President Putin told Russian channel Rossiya 1 that he hoped talks between Germany and Belarus could provide a breakthrough.

He said: “As far as I understand, Alexander Lukashenko and Chancellor Merkel are willing to talk to each other. I hope this happens soon.”

He said of the migrant crisis: “I want everyone to know: we have absolutely nothing to do with this.”