Britain’s daily Covid cases have dropped 13 per cent in a week with 4,654 more infections today, official figures have revealed.

Deaths have risen slightly to 23 — up from 17 last Monday. But the Department of Health’s official fatality toll relies on registrations, meaning day-to-day counts can fluctuate.

Experts would be baffled by any genuine spike in deaths because infection rates have not spiralled out of control since schools in England reopened on March 8. The mammoth vaccine drive, which has now reached 30.4million vulnerable adults, will also save thousands of lives.

It comes as Boris Johnson today warned Britons ‘don’t risk the progress we’ve made’, as England stepped out of lockdown straight into a three-day spring heatwave, with temperatures hitting 66.2F (24C) this afternoon and a predicted 76F tomorrow and Wednesday – just shy of the all-time record of 78F.

The Prime Minister, who will address the nation at 5pm, said it was ‘vital’ to continue abiding by social distancing rules as millions began to gather in parks, pools and sports venues to mark the first major easing of restrictions this year. 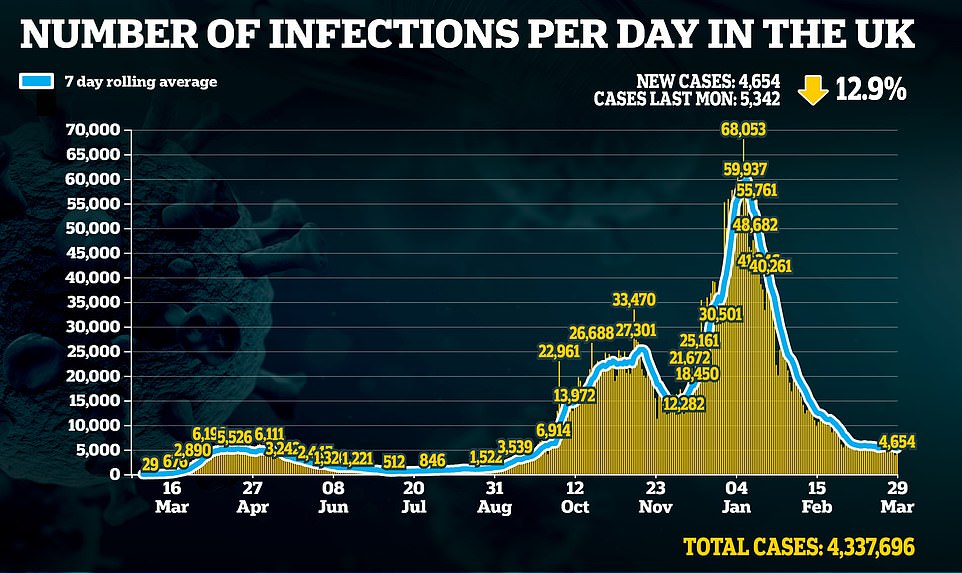 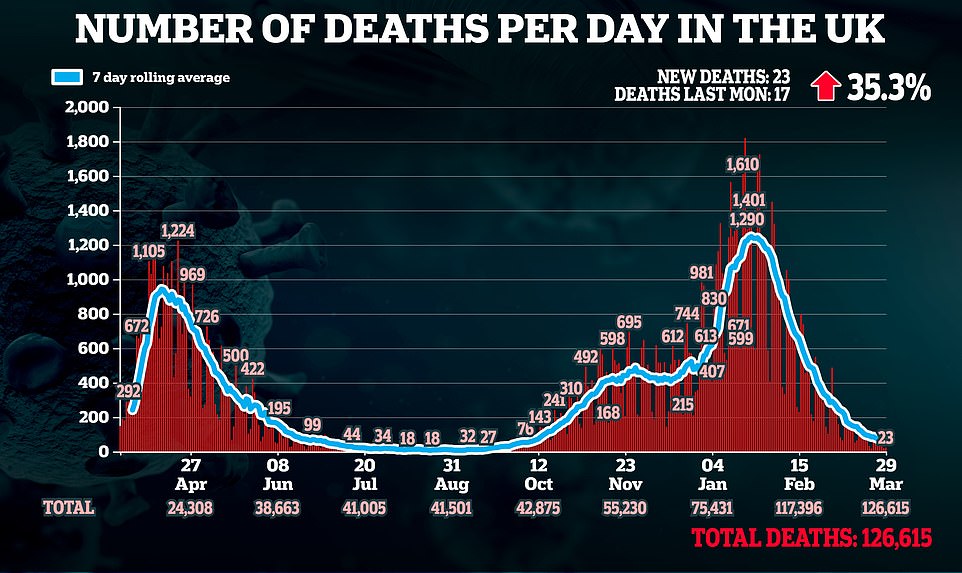 END TO STAY AT HOME MESSAGE

People will still be encouraged to stay local unless they are visiting a relative who has been isolated. The work from home message still applies

Groups of up to six people from different households or two full households will be able to meet outside, including private gardens

Outdoor facilities can reopen – such as tennis and basketball courts; golf courses; and outdoor swimming pools. Organised grassroots sports, such as football, return for children and adults

Before March 29, Britons were only able to consider booking a wedding or civil partnership in exceptional circumstances.

This may be, for example, if you or your partner is seriously ill and not expected to recover or is to undergo debilitating treatment or life-changing surgery.

This rule no longer applies, meaning weddings – which must be limited to six people – are open to all

In other Covid news:

As of today — six people, or two full households — are allowed to meet outside, including in back gardens, for the first time in four months, while the Government’s ‘stay at home’ rule has been replaced with ‘stay local’.

People have also been quick to take advantage of the reintroduction of outdoor sports, with golfers, tennis players and outdoor swimmers already out in force.

Weddings can also go ahead, and Ben and Gabriela Lloyd were the first couple to get married at St Albans registry office today.

But Professor Sir Mark Walport, former chief scientific adviser to the Government, warned people against hugging, saying they would only be able to do so again when case numbers are ‘very, very low’.

No10 has confirmed families can head to the beach or other beauty spots to bask in the late-March sunshine with no limit on the distance they can travel, although Matt Hancock urged people to try to stay local.

In a video this morning, the PM stressed that ‘we must remain cautious, with cases rising across Europe and new variants threatening our vaccine rollout’ as the latest step on his road map out of lockdown was reached.

‘Despite today’s easements, everyone must continue to stick to the rules, remember hands, face, space, and come forward for a vaccine when called… don’t risk the process we’ve made.’

But critics have said lockdown should now be eased even faster than planned with half the population now having their first jab and Covid cases at the lowest levels since last summer and number of deaths in London hitting zero for the first time in months.

In Wales, the ‘stay local’ order ended on Saturday and people are now allowed to stay in self-contained holiday accommodation. The stay home order in Scotland is to end on Friday, while in Northern Ireland up to six people, or two households regardless of size, can meet outdoors from Thursday. 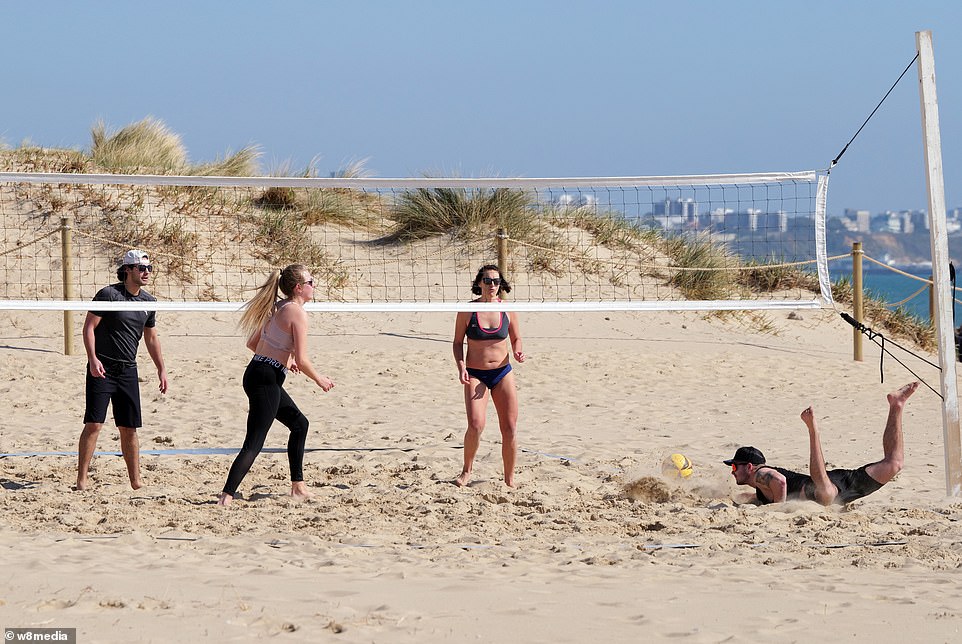 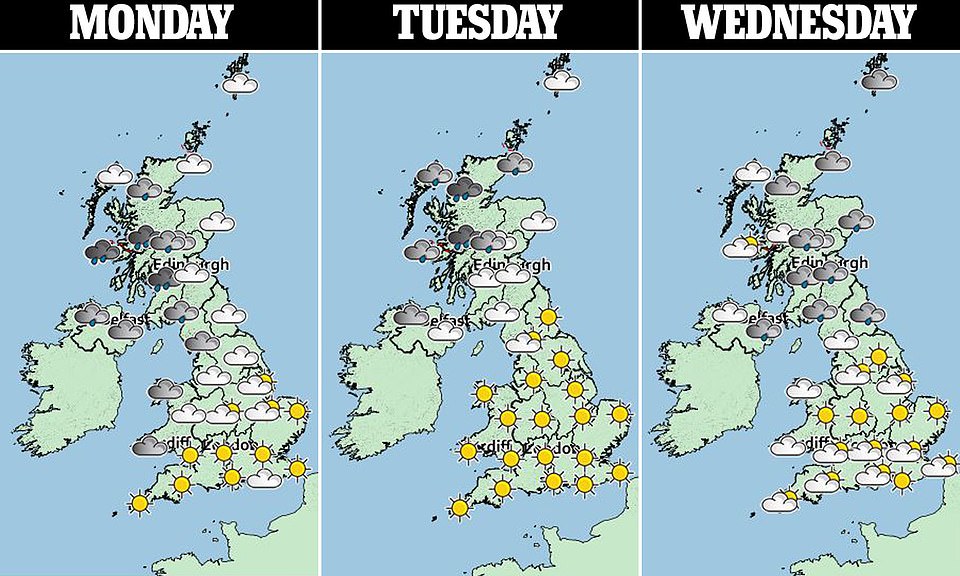 Four in 10 black elderly people in England have not had their coronavirus vaccine, official figures show in the first major breakdown of jab rates among ethnic minorities.

A report published today by the Office for National Statistics revealed just 58.8 per cent of black African Brits over the age of 70 had received at least one dose of either Pfizer or AstraZeneca’s vaccine by March 11.

The ONS said that, nationally, uptake in the over-70s was 90.2 per cent when all ethnic groups were included, with rates highest among white people (91.3 per cent) and Indians (86.2 per cent).

After black African Brits, the poorest rates were recorded in black Caribbeans (68.7 per cent), Bangladeshis (72.7) and Pakistanis (74 per cent).

The report, which included data from 20million over-70s invited for their jab in England, also found Muslims were the religious group least likely to take the vaccine, with only 72.3 per cent of over-70s getting one so far, followed by Buddhists (78.1 per cent).

People who were disabled were also slightly less likely to have been vaccinated compared to healthy people of the same age. The reasons for this are not totally clear.

Ben Humberstone, head of health analysis and life events at the ONS, said: ‘Vaccination rates are markedly lower amongst certain groups, in particular amongst people identifying as black African and black Caribbean, those identifying as Muslim, and disabled people.

‘These differences remain after accounting for geography, underlying health conditions and certain indicators of socio-economic inequality.’

Jab hesitancy among black, Asian and minority ethnic (BAME) people has been a theme throughout the rollout, with language barriers, a mistrust in Government and misinformation online thought to be fuelling scepticism.

It comes as Britons are expected to flock to beaches to enjoy this week’s mini-heatwave, after the Government confirmed families from London and elsewhere can now travel to the seaside.

People in England will be taking advantage of the relaxation of lockdown measures as outdoor gatherings and sport events resume, with highs of 66F (19C) expected in the South East today and 75F (24C) tomorrow.

There is now no legal limit on how far people can travel to enjoy day trips at the countryside or coastline, although overnight stays are still banned at hotels, self-catering accommodation and other people’s homes.

But there will be concerns among ministers that the unseasonably warm weather will make social distancing very tricky on beaches after the likes of Brighton and Bournemouth were swamped with visitors last summer.

The Government’s ‘stay at home’ order ended this morning, with messaging moving to ‘stay local’, but people are still being asked to continue to work from home where possible and overseas travel remains banned.

Government officials today confirmed to the Evening Standard that it is now legal to travel from London to the seaside for a day on the beach, and there is no limit on the distance you can travel to see friends or family.

The newspaper also put two examples to the Government, which it confirmed were acceptable. These were driving to the New Forest in Hampshire to ride a trial, or taking a windsurfer or kayak to the coast for the day.

A Government spokesman said: ‘Whilst the ‘stay at home’ rule has ended, many restrictions remain in place. We ask everyone to act responsibly and cautiously and minimise travel where possible as these restrictions ease.’

Temperatures in parts of the UK are expected to be significantly warmer this week as families and friends are reunited and sporting activities are allowed to resume in England.

Pfizer also confirmed today it would drastically ramp up its vaccine production capacity and was prepared to dump the German partner it worked on the breakthrough jab with.

The US drugs giant has revealed plans to use gene-based technology, harnessed by BioNTech, to tackle other viruses and illnesses beyond Covid.

Pfizer’s boss claimed the firm had learned enough about mRNA vaccines to go solo, adding that it no longer ‘needs to work with BioNTech’ beyond the end of the companies’ flu jab agreement in July.

Albert Bourla, the firm’s chief executive, revealed the company had recruited at least 50 more scientists to work out of its new mRNA-focused lab in New York.

It has also secured specialised raw materials and designed clinical trials so that it can manufacture and study vaccines without splitting profits.

Mr Bourla told the Wall Street Journal: ‘We like working with BioNTech, but we don’t need to work with BioNTech. We have our own expertise developed.’

The German company was the brains behind the Covid jab, which was proven to be 95 per cent effective at blocking Covid symptoms and became the first in the world to get approval in December when Britain gave it the green light.

Pfizer, most famous for inventing Viagra, came on board to manufacture, distribute and commercialise the vaccine.

The two companies are currently splitting profits on the Covid jab evenly, with sales expected to return roughly £13billion this year.

BioNTech seemed unaffected by the news in a statement and said it welcomed the ‘acknowledgement’ of the technology it had developed.