Three-year-old Tawid, his sister Asia, six, and their mum Sultan Zari had been among crowds trying to flee Afghanistan. 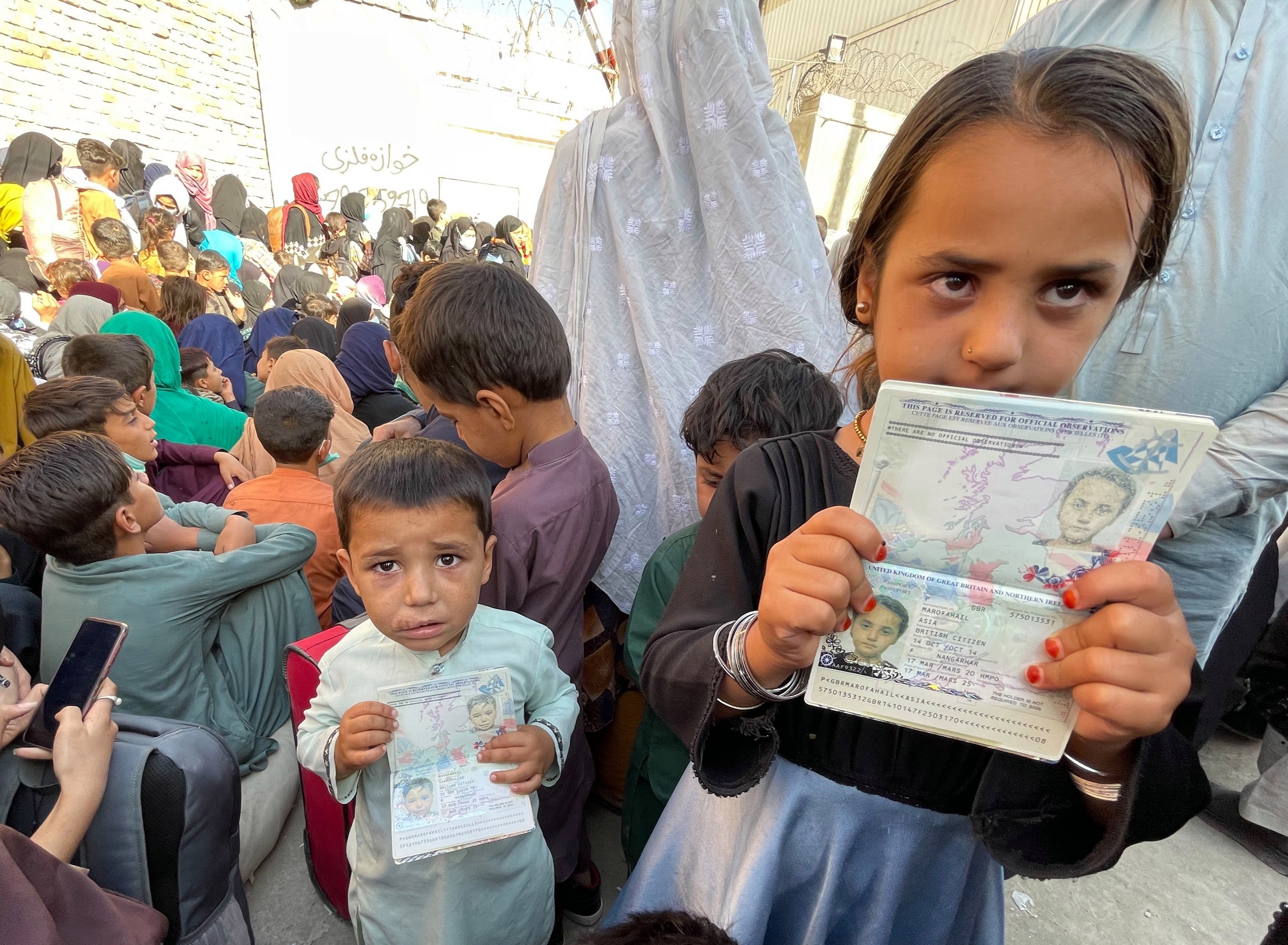 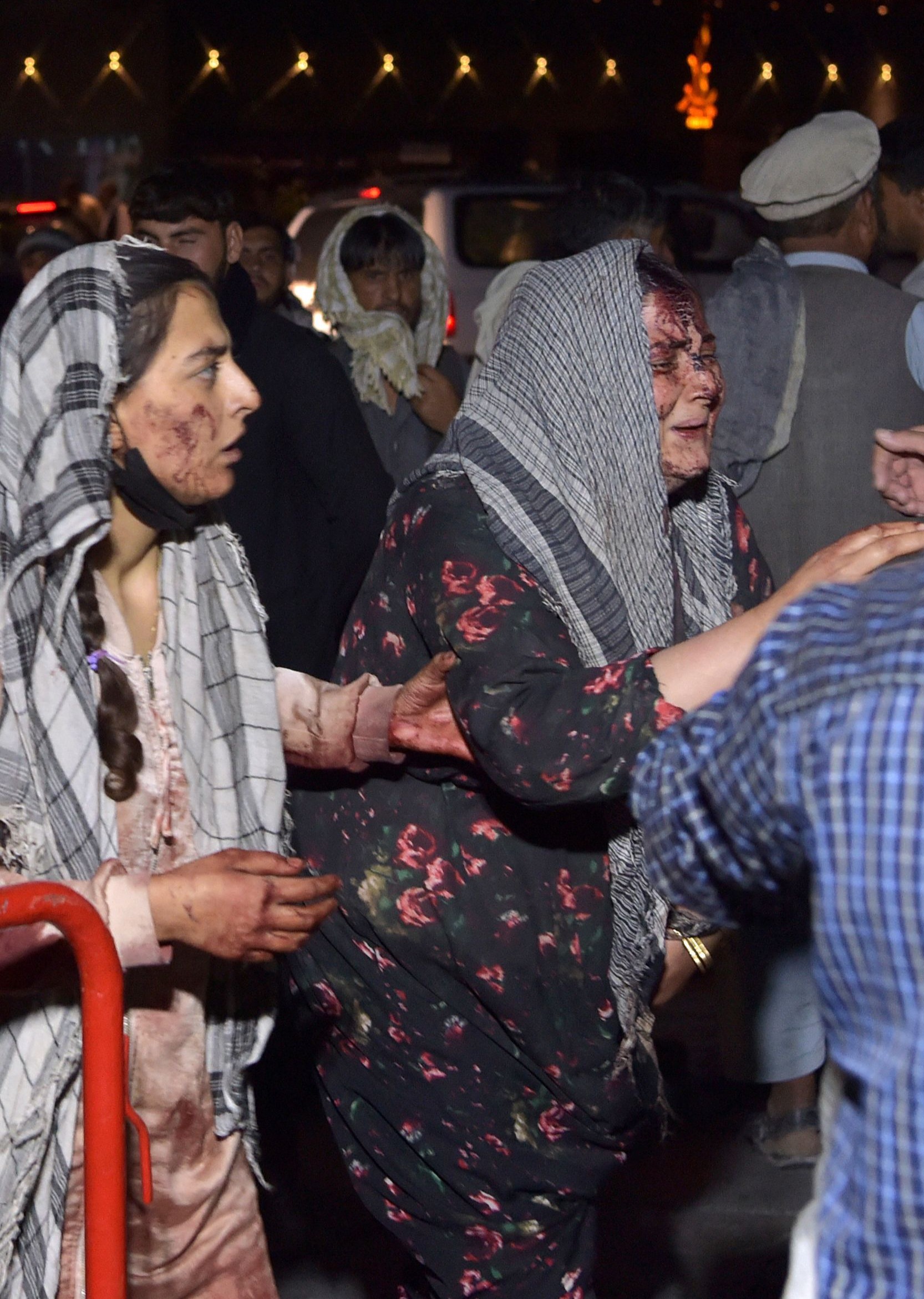 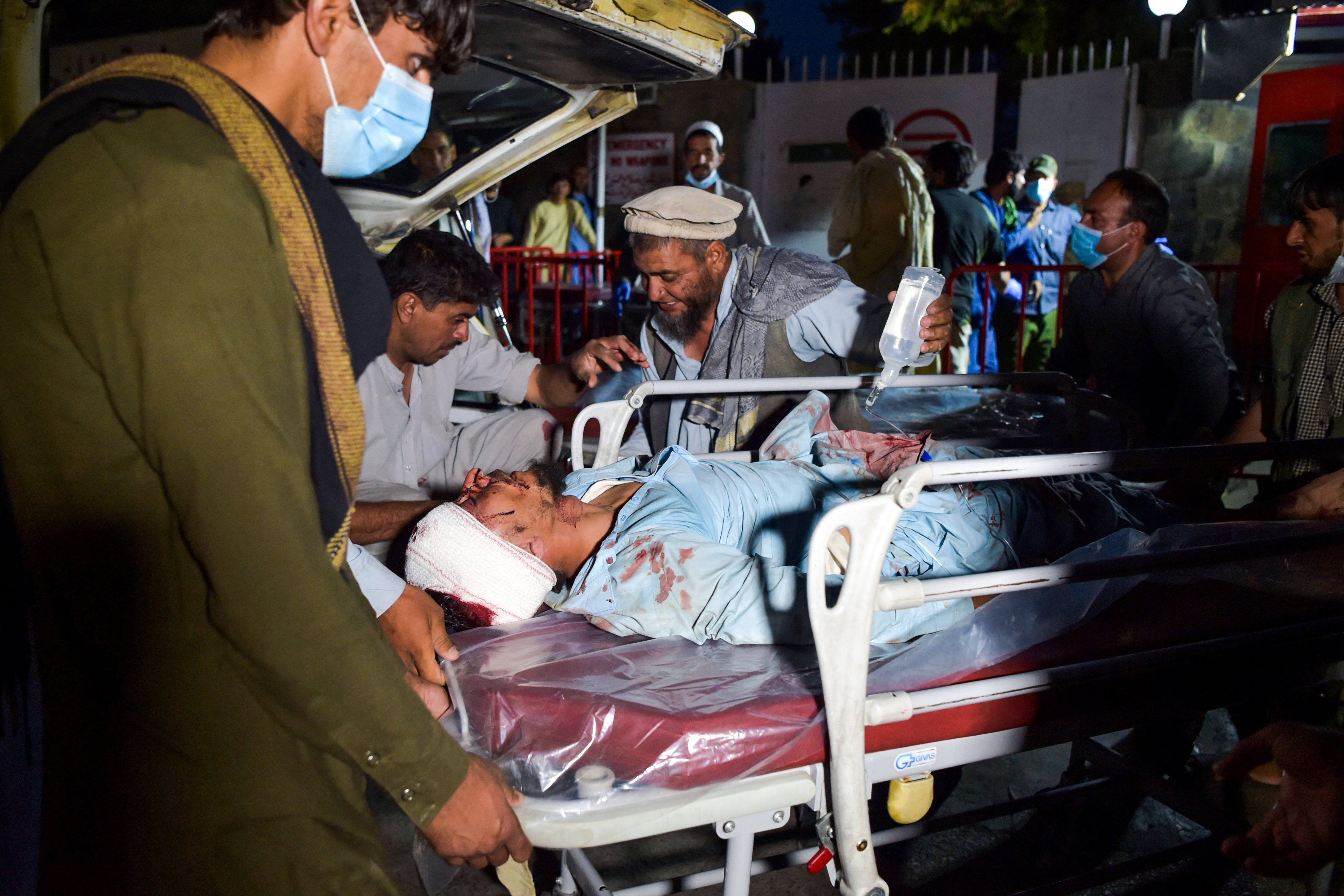 The airport was later targeted in twin suicide bomb attacks by IS fanatics.

The dead included children and 12 US troops, while at least 143 people were injured.

Sobbing Sultan said: “Getting to the UK is everything for us. this is hell on earth.” It was not known last night if the family had been evacuated yet.

US security chiefs had warned of an imminent attack by IS offshoot ISIS-K hours before the atrocities.

A suicide bomber detonated a device outside the Baron Hotel, used by UK officials to process Britons and Afghans eligible for evacuation.

Amid panic from the blast, a second bomber then struck outside Abbey Gate — a British-controlled access point to the airport.

Shocking scenes of the bloodbath showed bodies piled up on streets and scores of wounded being ferried to hospital in wheelbarrows.

The loss of 11 US marines and one Navy medic is the biggest for US forces in a single incident in a decade.

Nato countries, including Denmark, stopped evacuation efforts and US troops sealed off the gates to the airport.

But last night Boris Johnson vowed to continue with the evacuation in the wake of the “barbaric” attacks.

🔵 Read our Afghanistan live blog for the latest updates

Speaking after an emergency Cobra meeting he said: “We’re going to keep going up until the last moment.”

The terror attacks pile more pressure on US President Joe Biden, who ignored advice to keep troops on the ground after the evacuation.

MP Tom Tugendhat, who served in Afghanistan, said: “The attack on innocent people trying to escape the horror of Taliban rule shows exactly who the group has brought with them.

Last night there were reports of more blasts in Kabul and gunfire at the airport.

We’re going to keep going up until the last moment.

IS used its media channels to claim responsibility for the atrocities, naming an Afghan man as one of the bombers.

Ministers had warned of a “very imminent, highly lethal” attack and the US, UK and Australia urged citizens to stay away from the airport gates.

But just hours before the blasts, The Sun met toddlers waving British passports yards from the Baron Hotel.

Sultan ignored the stay-away order to take their chances in a last-ditch bid to reach Britain before the airlift was called off.

Sultan said they had travelled from the city of Jalalabad in eastern Afghanistan and had been waiting for three days to get through the gate.

“My husband has died, my father has died. My brothers are both in England.

“Now I have no men in my family in Afghanistan. There is no life for me here under the Taliban.”

The Taliban banned women from leaving home without a male relative to escort them when they ruled Afghanistan from 1996 to 2001.

BODIES IN THE STREET

Yesterday, the militants set up extra checkpoints to limit access to the airport gate which bore a homemade sign saying. “BRITISH PASSPORT HOLDERS”.

Little Tawid burst into tears as an angry Taliban guard brandished a whip made from hosepipe over his family’s heads.

The Sun left before he made it into the gate and it was not clear if his family were evacuated.

General Kenneth F McKenzie, commander of US Central Command, said the working assumption was that an IS suicide bomber was being searched, or about to be searched, by US troops at Abbey Gate when their device went off.

IS gunmen lying in wait then opened fire on the US military and Afghan civilians in the wake of the blast.

The Pentagon said: “We can confirm that the explosion at the Abbey Gate was the result of a complex attack that resulted in a number of US and civilian casualties.

“We can also confirm at least one other explosion at or near the Baron Hotel, a short distance from Abbey Gate.”

Bodies were strewn across the street, while survivors were forced to fish corpses out of a filthy sewer where they had been thrown by the explosion.

Some of the wounded were loaded into wheelbarrows and carted towards hospitals.

The Taliban condemned the blast but laid the blame at America’s door — insisting it happened in a part of the city “where US forces are responsible for security”.

Afghanistan’s former vice president and ex-spy chief Amrullah Saleh said the carnage was “a tiny fraction of the tragedy affecting my country”.

He added: “America should show its strength, it should not show weakness. It should not bow to this terrorism.

“If it wants to adhere to the August 31 deadline, that means leaving Afghans to their deaths.”

US President Biden overruled advice from his allies, his generals and intelligence staff by ordering troops to cut and run completely from Afghanistan.

The speed of the US withdrawal, without a proper peace deal, shattered the morale of Afghan troops and led to the government’s lightning collapse.

Experts warned the country would become a breeding ground for terrorism, as it was before 9/11 when al-Qaeda used its mountain hideout to plot the World Trade Centre attacks. Western officials said the Taliban had kept very close links to al-Qaeda.

The man in charge of Kabul security, Khalil Haqqani, is a wanted terrorist by America with a $5million bounty on his head.

UK spooks were compiling reports of IS terrorists travelling into Kabul from hideouts in eastern Afghanistan to carry out yesterday’s attack.

There are fears about ISIS-K, an Afghan offshoot of IS that emerged in the east of the country in 2014. They believe the Taliban’s ideas are too soft.

US security experts say ISIS-K was behind 100 attacks on the country and Pakistan between 2015 and 2017.

However, a Western intelligence source said militants backed by Iran had been plotting a spectacular to avenge the death of Qasem Soleimani, the head of the Revolutionary Guards’ Quds Force killed by a US airstrike.

Back home, Labour leader Sir Keir Starmer said news of the blasts in Kabul was “devastating”.

"Taliban checkpoints stopping our people but not terrorists. There are people — damn good people — who for days have been trying to get out, now fleeing.” 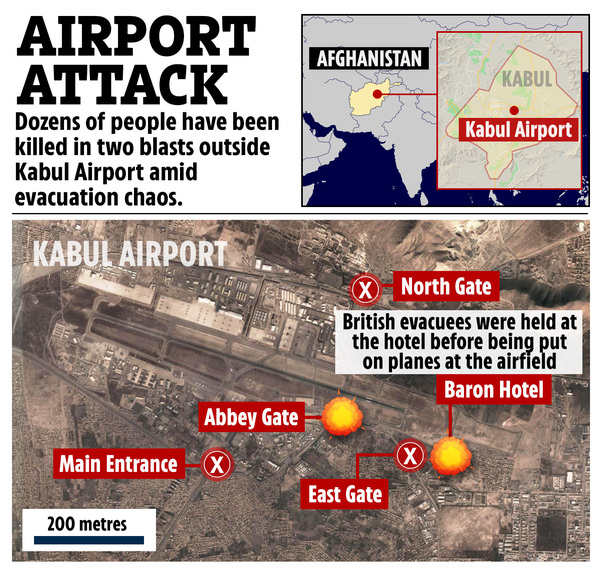 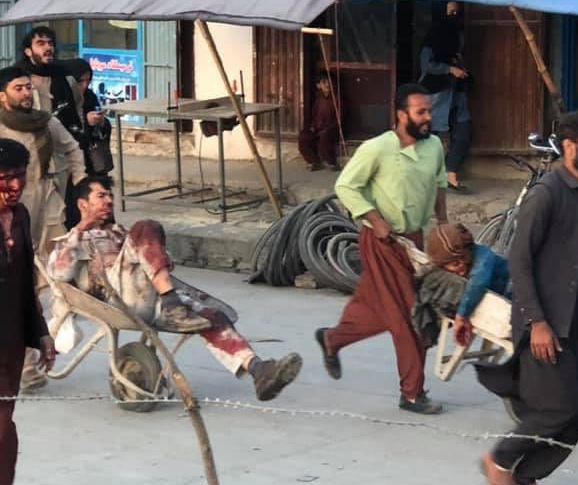 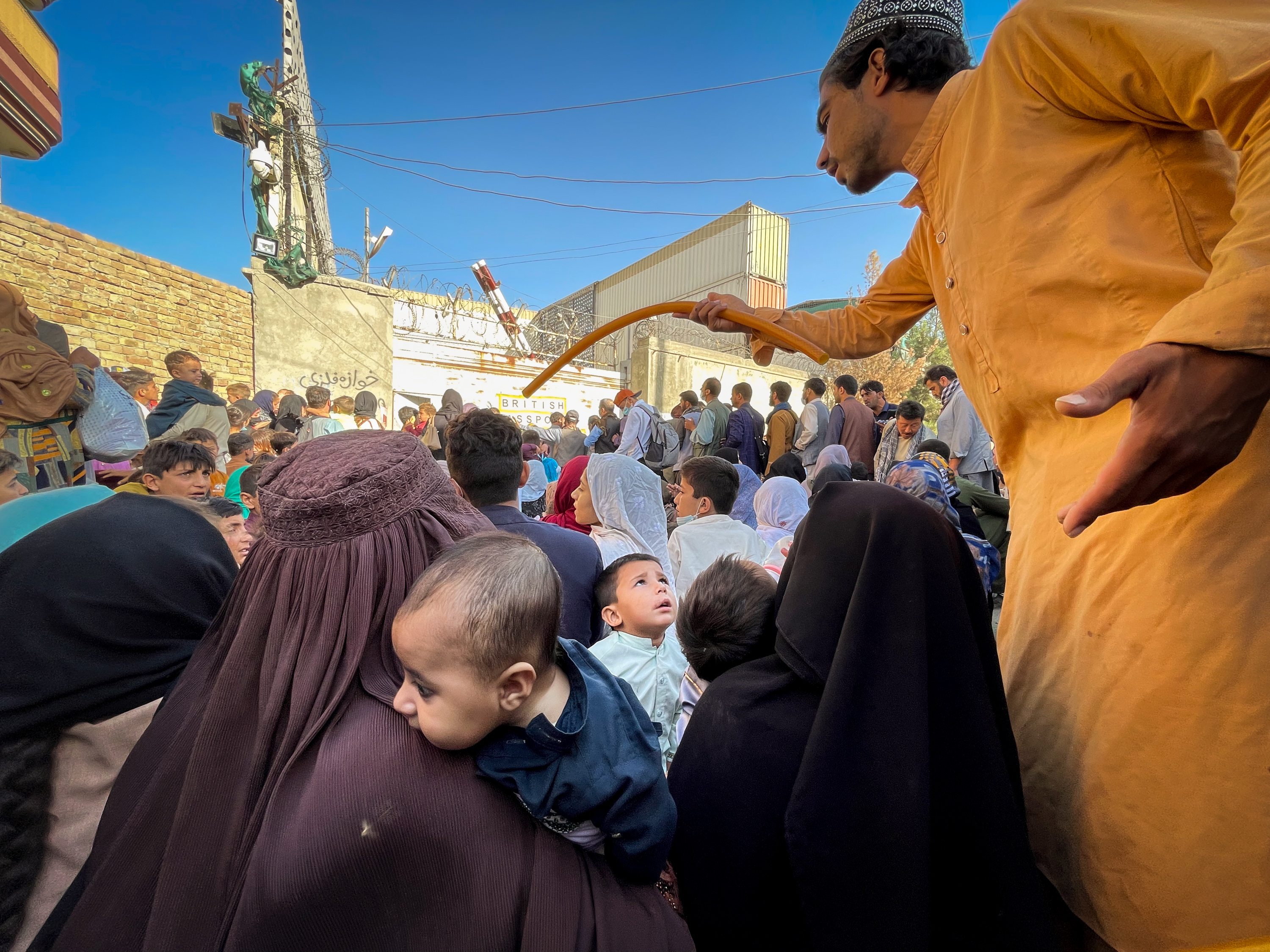