British passengers queued for more than 45 minutes to cross the UK border at Heathrow Airport earlier today, complaining of chaotic scenes and a lack of social distancing.

Passengers arriving at Terminal 5 yesterday afternoon posted photographs of lines of people standing in line awaiting to get through passport control and enter the country officially.

Some complained that many of the automated passport reading machines, which are supposed to speed access through the border, were not operational – despite the long lines of people. 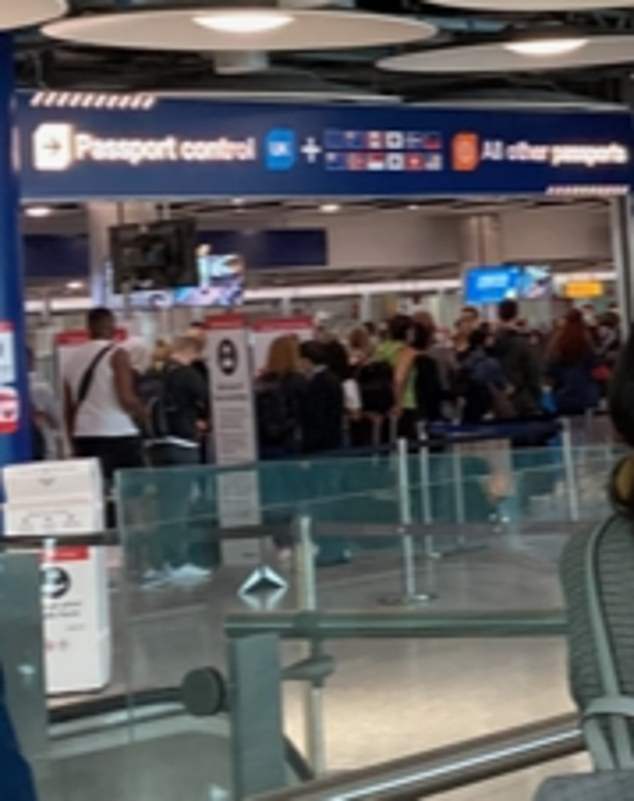 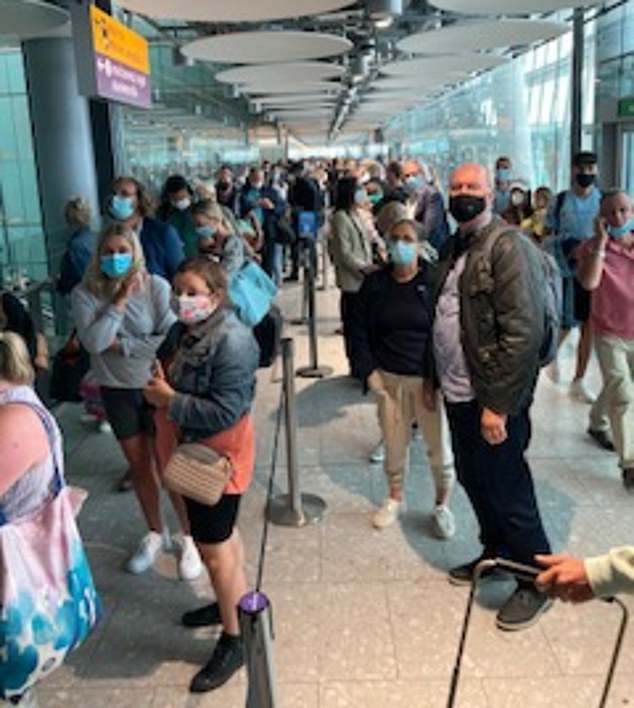 One passenger, Mandy Seal, 62, from London said it was like entering ‘the abyss’.

She had arrived back from a break in Bari, Italy, which is not on the government’s travel warning list.

‘I flew British Airways and they were absolutely brilliant. They allowed passengers off the aircraft four rows at a time, so there was none of the usual crowding.

‘But after arriving at border control, there were scenes of chaos. Not all of the automatic gates were working.

‘One official put tape across to stop anyone from approaching the border queue. It was very confusing.’

Passenger numbers at Heathrow Airport are still only a fraction of their normal levels because of the Covid-19 travel restrictions and many people’s reluctance to fly abroad in case the Government’s advice changed and forced them into a fortnight’s quarantine.

Ms Seal said: ‘It was the border that was an absolute bottleneck.

‘We are heading to the abyss. The whole government is completely incompetent. Priti Patel doesn’t know what she’s doing.’

Ms Seal said her experience in Heathrow contrasted greatly with her arrival in Bari.

‘Normally Bari is a busy airport, but there were far fewer passengers. I only had hand luggage and was straight of the plane. A human checked my passport and it was through customs and on to the car hire in a matter of minutes.’

One insider told MailOnline, the Government’s Track and Trace form is causing ‘a bottleneck’ at the border as some passengers have not completed the forms correctly.

MailOnline has approached the Home Office for a comment about the delays.

Heathrow Airport said matters of Passport Control are an issue for the Home Office.

Meanwhile, Prime Minister Boris Johnson is facing a revolt from his own MPs over his refusal to introduce Covid-19 testing at UK border crossings.

David Davis, Chris Grayling, Theresa Villiers and Paul Maynard were among senior Tories to speak out against the Government.

It is thought that 40 backbenchers could join a rebellion over the shambles ahead of a Commons debate next week.

Despite the uproar, Mr Johnson yesterday insisted tests at airports and ports would create a ‘false sense of security’ and quarantine was ‘vital’ to tame the pandemic.

END_OF_DOCUMENT_TOKEN_TO_BE_REPLACED

END_OF_DOCUMENT_TOKEN_TO_BE_REPLACED
Recent Posts
We and our partners use cookies on this site to improve our service, perform analytics, personalize advertising, measure advertising performance, and remember website preferences.Ok