The relatively small number of arrests after a mob stormed the Capitol left many environmental activists shaken on Thursday — and wanting answers. Why did so many people who brought destruction into the home of American democracy simply walk away after doing so much damage, not just to a building but to the nation’s sense of itself?

The Rev. Lennox Yearwood Jr., a minister and community activist who heads the Hip Hop Caucus, a civil and human rights group, called the sight of the rioters being led out of the Capitol seemingly without repercussions “heartbreaking.” Mr. Yearwood has a long history of protest on a range of issues and has been arrested, and even beaten, as a result.

“We know we’re going to go through that punishment” as part of fighting for cleaner energy, for environmental justice, for a better world, he said. “Up until yesterday, I thought, ‘This is how it’s done. You stop business, you’re going to be arrested, you’re going to be treated this way,” he said.

“Yesterday changed all that,” he said. Some rioters carried weapons, injured police and committed acts of vandalism, and “certain police allowed them to walk away.”

Washington protests have long been a part of climate change activism and other movements, and so have arrests.

In the fall of 2019 and into January 2020, the actress Jane Fonda attended weekly protests known as Fire Drill Fridays to bring attention to climate change. Ms. Fonda was arrested five times, as were other celebrities including Sam Waterston and Martin Sheen. In all, more than 600 arrests occurred over the course of those protests alone, from 16 at the first demonstration to more than 300 at the final demonstration on Jan. 11, 2020. 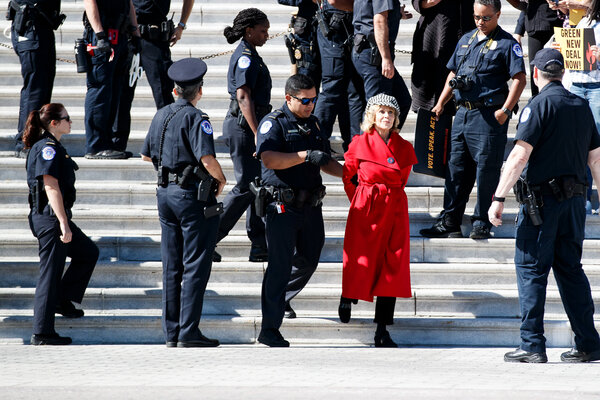 Those numbers pale in comparison to the more than 10,000 arrests last year related to protests over racism and police brutality around the country, as counted by The Associated Press, many on minor charges such as failure to disperse or curfew violations.

Bill McKibben, a writer and activist who said he has been arrested four times in Washington alone, and a half-dozen times at other protests, called nonviolent civil disobedience based on the examples of the Rev. Martin Luther King Jr., Gandhi and the suffragists “one of the greatest inventions of the 20th century.”

“At its best, it catches people’s hearts,” he said.

And central to the idea of peaceful civil disobedience is the willingness to accept a penalty, including arrest.

By comparison, he said, the storming of the Capitol on Wednesday involved violence and vandalism, and some members of the mob carried weapons and zip-tie handcuffs. “These guys were intent on inflicting suffering and punishment on other people — it’s the opposite of civil disobedience,” Mr. McKibben said. “And oddly, it was met with the opposite reaction.”

Of course, confronting a violent, potentially armed mob is not the same as dealing with orderly protesters who may intend to get arrested, and the police might well be reluctant to escalate confrontations that could easily lead to bloodshed and loss of life.

Even so, the apparently light treatment of Wednesday’s protesters troubled Kate Ruane, senior legislative counsel at the American Civil Liberties Union, who said that the treatment of the predominantly white crowd was far more gentle than the police response to many of the antiracism protesters and climate change activists of color, including the clearing last year of Lafayette Square in Washington with chemical irritants and force, and the treatment of Native American activists and others opposing pipeline projects.

“It is incumbent upon all of us,” she said, to compare the images from the Capitol riot with the images of the treatment of past protesters “and ask probing questions about the difference.”

Many states, she added, are trying to stiffen charges for protests involving infrastructure, “all aimed at deterring people expressing messages that those in power do not like.”

President-elect Joseph R. Biden Jr. made a similar observation on Thursday. “No one can tell me that if it had been a group of Black Lives Matter protesting yesterday, they wouldn’t have been treated very, very differently than the mob of thugs that stormed the Capitol,” he said. “We all know that’s true, and it is unacceptable. Totally unacceptable.”

Mr. Yearwood was arrested last year in Washington along with Mr. McKibben for a sit-down protest in a Chase Bank; they were trying to draw attention to the financial pipeline between major financial institutions and the fossil fuel industry. Always, he said, the goal is “being nonviolent, being as peaceful as possible,” and working with the police, “recognizing the job they have to do” in restoring order.

The comparatively lenient response to the overwhelmingly white protesters on Wednesday, he said, “was the epitome of white supremacy,” and a dangerous precedent for the future of protest in the United States. He said he feared that in the future, young activists would tell him when he advised a nonviolent path that “all the peace stuff you talk about, Rev and Bill, that doesn’t work.”

“And that leads to destruction,” he said.

END_OF_DOCUMENT_TOKEN_TO_BE_REPLACED

END_OF_DOCUMENT_TOKEN_TO_BE_REPLACED
Recent Posts
We and our partners use cookies on this site to improve our service, perform analytics, personalize advertising, measure advertising performance, and remember website preferences.Ok