Home » World News » Cashless backlash: Why the US is turning its back on a cash-free world

Cashless backlash: Why the US is turning its back on a cash-free world

San Francisco: There are few examples of Silicon Valley's hyper-gentrification quite as stereotypical and bizarre as Cafe X, a new coffee bar on a busy San Francisco street corner run by a robot.

It's funded by a bunch of tech venture capitalists, including PayPal co-founder Peter Thiel's foundation, and crafted by a much-feted Silicon Valley design firm. Some of the world's biggest tech companies are within a stone's throw of its location, like Google's massive waterfront offices or Twitter and Uber's headquarters in the once-seedy Mid Market area, both lured by payroll tax breaks designed to force the homeless from the area and encourage local bike shops and multimillion-dollar apartment complexes instead.

After customers order on an iPad, Cafe X's robotic arm whirrs and buzzes then waves goodbye as it serves up a matcha latte or a (fairly average) locally-roasted Intelligentsia coffee with vegan-friendly oat milk. And, more importantly of late, Cafe X is totally cashless. 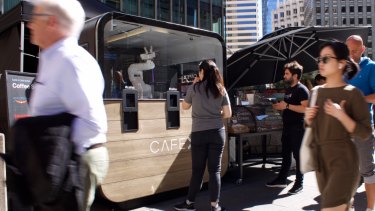 Over the road, Senor Sisig, a Filipino food truck, has gone cashless too.

"I never carry cash," 31-year-old businessman Vincent Morr says as he orders lunch from the truck. "When I was in my 20s and worked as a waiter, I got tipped in cash. But now it's just inconvenient."

Glade Luco, 41, a chief technology officer for a nearby company says he has "mixed opinions about it".

"There are some services that it's OK to be cashless, like, there are so many places to get a sandwich you can just go somewhere else if you need. And the line for this place can go all the way down the street sometimes so it's good for [speed]. But I think it's bad if places like convenience stores, or services somebody needs, do it." 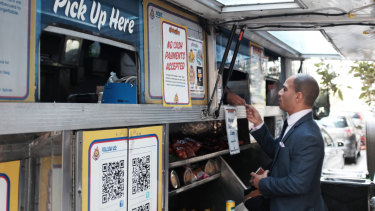 Luco is not the only one with mixed opinions. As the developed world moves rapidly towards a cashless society, some of the most powerful and influential parts of the United States are starting to push back.

Last month, San Francisco's council voted unanimously to ban cashless stores and restaurants. They joined the city of Philadelphia and the states of Massachusetts and New Jersey, which have all enacted bans. New York City and Washington, D.C. are expected to vote on bills soon (although Chicago recently voted against a ban).

It's an astonishing departure from the rest of the world, where a cashless future has seemed inevitable. Sweden is rapidly moving to be cashless and, in China, tech giants Alibaba and JD.com have eliminated checkouts in hundreds of stores. In Australia, the RBA declared in December that cash was almost dead, and experts predict the final nail could come as soon as 2020.

Huge US chains Amazon and Walmart, and smaller chains such as Aussie-themed coffee shop Bluestone Lane, are also adopting cashless technology. And credit card companies, which conveniently make a fee on every card swipe, are campaigning aggressively. Visa, for example,  recently gave $US10,000 ($14,500) to 50 businesses that won its “cashless challenge”.

"For us, it's a safety thing, we have six trucks out on the road," Senor Sisig's cashier, Christine Manzano, says. "It gives me peace of mind knowing that all we have here is food."

But critics say the cashless economy discriminates against low-income people who may not have a bank account or credit cards. There are also privacy concerns; card payments become yet another digital footprint aggregated by companies to sell us more stuff. 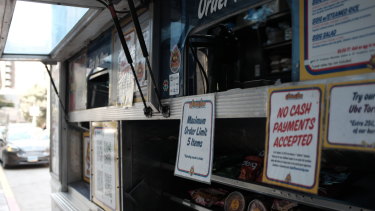 "It creates 'us and them' places," Philadelphia councillor Bill Greenlee said when his city, the sixth biggest in the US, enacted a ban on cashless stores in March. "I could walk into a coffee shop and pay with my credit card. Someone standing behind me in line with the same amount of money in their pocket, but in cash, cannot buy that product. That seems wrong."

Jonathan Kauffman, the San Francisco Chronicle's food and culture writer, said the move to cashlessness in a city already grappling with a staggering wealth divide created by the tech boom "seems like just one more way that San Francisco quietly reinforces the divide between the very, very poor and the middle class and rich".

"The city that enabled the cashless movement should be the one to examine its consequences as well," he wrote.

The cities that tech really wants to be in – New York, San Francisco, Austin, Seattle – are the cities that are most hostile to tech.

Even youth mag Vice, a bastion of the hip and the early adopters, ran the headline: "Going cashless looks more and more like a capitalist scam".

It captured the wider reckoning in the US right now about whether rapid technological advancement is all that good. Turbocharged growth has made housing prices in San Francisco, Seattle and other tech hubs astronomical, fuelling crisis levels of homelessness. Traffic has worsened and infrastructure has not kept pace. Around San Francisco and Seattle, it's common to see graffiti slogans like "F–k Bezos" and "evict Google". In New York, Amazon, which occupies 752,515 square metres of Seattle, was virtually chased out of the city when it announced plans to build its second headquarters, lured by billions in tax breaks.

"The cities that tech really wants to be in – New York, San Francisco, Austin, Seattle – are the cities that are most hostile to tech," says Bradley Tusk, a political adviser to tech startups and one of the early Uber advisers.

University of Toronto professor Richard Florida calls the phenomenon playing out around the US the New Urban Crisis: "The decline of middle-class neighbourhoods, the gentrification of the downtowns of certain cities, and the reshaping of America’s metropolitan regions into islands of advantage surrounded by larger swaths of disadvantage."

San Francisco is a "case study in winner-take-all urbanism", he says, but also needed to overcome paralysing NIMBYism.

The local council has been on a roll in the last two years, either banning, restricting or considering banning e-cigarettes, electric scooters, footpath delivery robots, plastic straws, fur coats, facial recognition technology and companies offering their staff free food which, they say,  kills surrounding businesses. (It may seem incredible to Australians that they banned plastic bags 10 years ago.)

One local newspaper dubbed the city "Ban Francisco", noting "an undercurrent of frustration that a city once famous for its free-spirited ethos has strayed so far from its roots that many of its policies, framed as progressive, are starting to feel downright oppressive".

"It’s true on social issues like guns or abortion. But true for tech policy too," he says. "[The backlash] is politically easy to play into, especially around privacy issues. But there are people who are genuinely concerned about finding a balance, about the costs of tech.

He describes the regulatory environment in the US as "tumultuous" as people muddle their way through breakneck change. "Regulators and politicians are looking for their cues from voters and voters are still figuring it out."

A quick glance at the online reviews for Cafe X hint at just how tumultuous that process of figuring it all out is.

One Facebook user mused about how wonderful the world would be if menial jobs were done by robots, allowing people to pursue their passions instead. Another man, writing on review site Yelp, said Cafe X "embodied what's wrong with San Francisco and tech culture".

The robotic kiosk pushed his local florist out, eliminated jobs and offered a "cheesy niche product" that brought humans one step further away from having personal interactions.

"This is why the future is bleak as hell," he wrote.