China has followed variations of that formula for dealing with the coronavirus for more than a year – and a new outbreak suggests that they could be part of Chinese life for some time to come. 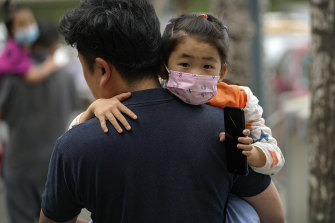 A man carries a child kindergarten in Beijing this week.Credit:AP

China appeared to get the coronavirus under control nearly a year ago. But hundreds of millions of Chinese people remain unvaccinated. New variants of the coronavirus have appeared, and questions remain about whether China’s self-made vaccines can stop them.

The latest cases have been found in Guangzhou, capital of the southern province of Guangdong. Authorities have blamed the Delta variant, which has caused widespread loss of life in India.

The city tested practically its entire population of 18.7 million between Sunday and Tuesday, some of them for the second time. It has also put neighbourhoods with a total of more than 180,000 residents into total lockdown, with practically no one allowed out except to go to medical testing.

The early infections appear to have jumped from person to person at a cluster of eateries. Each infected person has infected more other people than in any previous outbreak that China has confronted, Zhang Zhoubin, deputy director of the Guangzhou Centre for Disease Control, said.

“The epidemic faced by Guangzhou this time is an unprecedented opponent, and it requires more resolute and decisive measures to deal with it,” he said.

China’s approach has evolved since the coronavirus first emerged, when Beijing initially put harsh restrictions on hundreds of millions of people. Today its lockdowns are focused on neighbourhoods rather than cities or provinces. China has made vaccination the centrepiece of its strategy.

Foreign businesses have worried that those limits on international travellers could snarl their plans. A European Union Chamber of Commerce survey released this week found that three-quarters of member companies said they had been adversely affected by travel restrictions, usually by hindering them from bringing in key engineers or executives.

Beijing has demanded that travellers from dozens of countries spend two weeks in employer-supervised quarantine even before flying to China.

Once there, travellers must spend at least two weeks and sometimes three or longer in government-supervised quarantine, even if they are fully vaccinated.