Home » World News » ‘Christmas is not cancelled’: Melbourne to reactivate CBD amid COVID

‘Christmas is not cancelled’: Melbourne to reactivate CBD amid COVID

Christmas will take on a distinctly different flavour this year but the City of Melbourne says the CBD will stay open for business as the city slowly claws its way back from the biggest downturn since the wake of World War I.

Days after releasing modelling showing the city faces a $110 billion hit to its projected bottom line over the next five years, and almost 400,000 job losses, Town Hall will vote on a plan to bring people back to the city's empty streets. 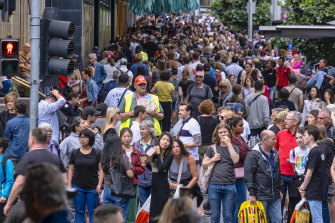 The plans will largely rest on making the city safe – with enhanced cleaning regimes to become a regular fixture – and attracting people back to the CBD.

Usually, the city would be gearing up for its busiest few months with the Melbourne Fashion Week, the AFL grand final parade, the Melbourne Cup parade, Melbourne Music Week, the Christmas Festival and New Year's Eve celebrations coming in quick succession.

The Christmas Festival alone would usually bring in more than $70 million in extra income for the city's businesses.

But next week, with the city a virtual ghost town, the council's Future Melbourne committee will instead approve plans to manage the city's "reactivation and recovery".

Expressions of interest are being sought from creatives, businesses, event spaces and organisations to put on socially distanced and "COVID-safe" Christmas events or installations to attract people into the city.

Plans are also well under way to transform Melbourne Fashion Week into a digital-only event, with at least 20 online runways to feature local designers.

The plan envisions Melbourne Music Week taking over outdoor spaces throughout the city, with artists also supported to perform via online streaming sessions.

The council's draft reactivation and recovery plan includes a "return to work pledge", which employers will be asked to take up.

"We need to show employers the benefits of bringing workers back to the city once it’s safe to do so," Lord mayor Sally Capp said.

"The City of Melbourne will be doing its bit, by bringing as many staff as possible back to Town Hall and our other key sites once restrictions ease."

Deputy lord mayor Arron Wood said the council would consider extending the fee waiver for
outdoor dining, which normally generates more than $403,000 a year in revenue. The council has already waived street trading permit fees and will next week vote on extending that fee waiver until next June.

"This would reduce cash pressures on businesses as they work to stay viable in the coming weeks and months."

END_OF_DOCUMENT_TOKEN_TO_BE_REPLACED

END_OF_DOCUMENT_TOKEN_TO_BE_REPLACED
Recent Posts
We and our partners use cookies on this site to improve our service, perform analytics, personalize advertising, measure advertising performance, and remember website preferences.Ok