When Joe Biden phoned Anthony Albanese from Air Force One on Sunday to congratulate him, he spoke the unspeakable. Climate change. This had been taboo, the standout topic where Biden and Scott Morrison simply could not agree.

Biden took power in the US determined to be a climate action leader. His administration had been quietly furious with Morrison’s climate recalcitrance. The US President went to the climate conference in Glasgow in November pledging that the US would double its 2030 target for cutting emissions. 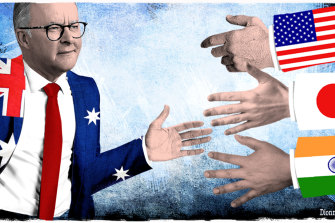 By contrast, Morrison went to Glasgow to repeat exactly the same target that Tony Abbott had set five years earlier. Australia’s only change was Morrison’s promise that Australia would update its longer-term goal, to reach net zero by 2050.

“We were looking to a close ally for support at Glasgow on a key policy and Morrison gave us just f—ing bullshit”, a senior US official told me, as I’ve reported earlier.

In a wider media background briefing in April last year, a US official made the same point more diplomatically when he told reporters that Australia’s policy was “insufficient”.

The election of Albanese removes this neuralgic point. Under Albanese, Australia’s new emissions target of a 43 per cent cut by 2030 isn’t as ambitious as America’s 50 per cent.

But now, Australian and American leaders can talk about climate change as a point of agreement rather than argument. Australia’s new position also brings it closer to that of the rest of the developed world.

When it comes to China, however, Australia and the US remain exactly where they were during Morrison’s term – determined to oppose Beijing’s drive for dominance in the Indo-Pacific.

Albanese struck a note of resolution on Monday before stepping onto his flight to the Quad summit. Asked by Sky’s Kieran Gilbert whether he saw a chance to try and take a bit of the heat out of the relationship with China, the new Prime Minister replied: “The relationship with China will remain a difficult one. I said that before the election. That has not changed. It is China that has changed, not Australia and Australia should always stand up for our values, and we will in a government that I lead.” 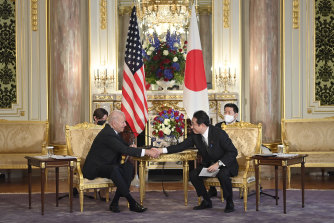 This is the unifying purpose behind the Quad group. It’s the reason for the summit that Albanese joins in Tokyo on Tuesday. And while it was Biden who first convened the Quad at the leaders’ level, the Quad’s true author is Xi Jinping.

Australia, India, Japan and the US were drawn together to form the Quad by their common desire to unite against China’s aggression under Xi. And the more aggressive China becomes, the firmer the Quad’s stance will become.

Indeed, that’s almost exactly what Biden and his Japanese counterpart, Prime Minister Fumio Kishida, said in their joint statement on Monday after their one-on-one.

Washington and Tokyo agreed to step up their security co-operation and deterrence capability in response to “China’s increasingly coercive behaviour” and a growing nuclear threat from North Korea.

Biden went a step further in his joint press conference with Kishida. “Are you willing to get involved militarily to defend Taiwan if China were to attack it,” a reporter asked, “even though you didn’t do so to protect Ukraine?”

“Yes,” Biden answered. “It’s a commitment we made.” This is the third time in recent months that Biden has given such an unequivocal commitment to defend Taiwan. Each time, his administration has tried to soften his remarks, to add ambiguity. But this was the third strike, and ambiguity is out.

The Quad has been careful at every summit to make sure it has a positive agenda, creating common goods for the Indo-Pacific, and not just a defensive one against Beijing.

Its first summit pledged to deliver one billion doses of COVID-19 vaccines to the poorer nations of the region, for instance. Tuesday’s summit is expected to announce, among other things, the creation of a seamless, satellite-based system for tracking illegal fishing activity in the Indo-Pacific.

The dominant illegal fisher, by far, is China. So while this is a positive step for the common good, it’s also a way to try to curb Beijing’s waywardness.

Australia, India, Japan and the US were drawn together to form the Quad by their common desire to unite against China’s aggression under Xi.

But what if Beijing blindsides Albanese, not with aggression, but with conciliation? What if its first move is to try to achieve a reset or rapprochement of some sort?

Look at Canada last week. The way Beijing has treated Canada these last three years is similar to the way it’s treated Australia – a freeze on political contact and punitive trade boycotts of major exports including pork and canola.

But last week the Trudeau government disclosed that Beijing had quietly lifted its ban on Canadian canola, a ban that has cost Canada billions. No official explanation was given. But the plain fact is that China has been suffering food shortages.

Had Trudeau’s government worked out some deal to de-escalate the countries’ confrontation? Evidently not. The next day, Canada announced that it would ban China’s Huawei and ZTE from its telecommunications systems. 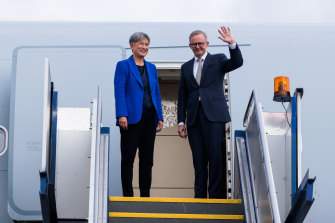 Prime Minister Anthony Albanese and Foreign Affairs Minister Penny Wong board a RAAF plane to fly to Japan for the Quad meeting on Monday.Credit:James Brickwood

The evidence suggests that China is relenting because it’s feeling the pain of economic slowdown and food shortages, not because of a political deal.

In Canberra, China’s embassy officials in recent weeks have been probing quietly to see if there’s a face-saving way to ease its coercion of Australia. Its diplomats have been testing the concept of mutual concessions – Beijing will remove some of its punitive measures if Australia makes some concessions.

Beijing is preparing to test the Albanese government’s willingness to compromise. Three vital points on this. First, so long as Xi’s 14 demands on Australia’s sovereignty remain on the table, no Australian government, Labor or Liberal, can offer any sort of concession.

Second, it’s striking that these unofficial soundings have been coming from the Chinese side. Australia is under no political or economic pressure to yield to Beijing.

Third, China’s actions with Canada suggest that it’s under enough pain from food shortages and economic downturn to remove bans on food imports regardless, that it is relenting unilaterally. No reciprocal concession required.

Albanese and his ministers should take note.