As Jacinda Ardern opened Parliament as the Prime Minister of New Zealand for the very first time, her cat lay dying behind a fence in her neighbour’s yard.

Paddles, who had extra toes (often referred to as her "opposable thumbs"), had plenty of fans. An official Twitter account dedicated to the polydactyl cat's antics after Ardern was elected had amassed over 11,000 followers.​ 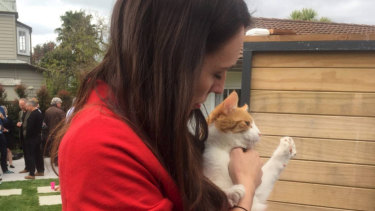 Jacinda Ardern with her cat Paddles outside her Point Chevalier home the day after the 2017 election.Credit:Laura Walters/Stuff

The Prime Minister's next door neighbour came out and asked him if he needed help. He told her he'd hit a cat; he asked if it was hers. She didn't own a cat. When he said it was ginger, she looked alarmed.

"I pointed at [Ardern's] house and said: 'Not this neighbour!'"

When the woman nodded, Chris' stomach dropped. They found Paddles lying behind a fence. She was clearly not alive.

With both the prime minister and her partner Clarke Gayford away from home, the woman offered to take Paddles to the vet in the vain hope that she would survive.

"I went back to work and tried to gather myself. Later in the afternoon, I popped back to the neighbour's house and she said Paddles hadn't survived. But Clarke was home.

"I went over and knocked on the door and Clarke came out. He was really nice and said 'look, it could have happened to anyone'. He was clearly very upset."

Chris let it go, and his two young children wrote a condolence card for Ardern and Gayford. In it his daughter, who was seven at the time, wrote that she hoped Ardern would not send him to prison. 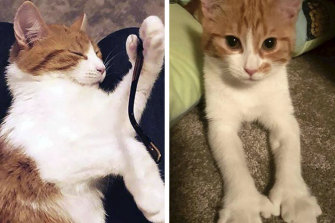 Paddles died after being hit by a car outside Prime Minister Jacina Ardern’s home in November 2017.Credit:Twitter/FirstCatofNZ

About a month later, Chris received a phone call from a blocked number. He didn't pick up, but his voicemail did.

"It was none other than Jacinda and she basically rang up to say 'sorry you had to go through that, thank you for stopping by and thanks for the card'.

"It was extremely nice of her to take time out of her day to check that I was okay for running over her cat."

And a few months later, Chris confessed to the prime minister in person.

"I was at the park in Point Chevalier with my two older kids and saw this small entourage come down by the beach, it was Jacinda with some relatives. Being classic New Zealand, everyone recognises her but looks the other way, everyone left her alone and I was 100 per cent going to do the same," he said.

"However, my son goes over – he was four at the time – and starts playing with her niece on those circular seats that spin round and Jacinda was essentially overseeing them both.

After a brief chat, the Prime Minister told Chris she lived locally.

"I told her I was aware of where she lived and I basically confessed that I was the one who ran over Paddles."

"It was kind of shocking at first, and I felt fairly bad because I knew a bit of the back story, I knew Paddles had some kind of social media presence and had an extra toe.

"I was also aware that to Jacinda and Clarke, Paddles was their fur baby at that point that they loved, so I was pretty gutted. But I obviously later found out they were pregnant so that made me feel a bit better that I didn't take out the only one thing that they loved."

The Prime Minister's office could not comment as she is away on holiday.