It is now exactly one year since Australia recorded its first coronavirus cases.

Victoria recorded its first COVID-19 case on January 25, 2020 – a man in his 50s who tested positive for the virus after arriving in Melbourne on a flight from Guangzhou in China on January 19.

And by the end of that day a further three cases had been confirmed in New South Wales, after two flew from the Chinese city of Wuhan and the third from Shenzhen.

Here is the article that was written that day, by health reporters Melissa Cunningham and Dana McCauley: Coronavirus spreads across Australia amid scramble to find more cases

In the 365 days since then, a total of 28,766 coronavirus cases were confirmed nationwide and there have been 909 deaths from the virus.

Spanish woman who ‘died’ of COVID comes back from the dead

An 85-year-old woman believed by her family to have died from the coronavirus surprised her relatives by returning to her care home in Xove, Spain nine days after they were told she had been buried.

The family of Rogelia Blanco were informed that the pensioner died of COVID-19 on January 13, the La Voz de Galicia newspaper said. Due to coronavirus protocols, the family was unable to attend the funeral.

So it was something of a surprise when Mrs Blanco arrived fit and well on Saturday back at the northern Spain care home where her husband Ramón Blanco also lived.

“I could not believe it. I was crying, after the death of my wife,” La Voz de Galicia quoted him as saying, adding that it now appeared to have been the woman who shared a room with Mrs Blanco who had died.

The San Rosendo Foundation, which runs the care home, said the error occurred when Mrs Blanco and other residents who tested positive for COVID-19 were transferred to another care home on December 29 for specialised treatment.

They were transferred to the Os Gozos residency in Pereiro de Aguiar, 223 kilometres from Xove.

“An identification error during the process of transfer from Xove to Pereiro de Aguiar led to the death of one of them being certified on January 13, although the identity was wrongly assigned,” the San Rosendo Foundation said.

“This is a one-off event, among the more than 100 transfers that have been made since last December to Os Gozos.”

New Zealand has reported its first local COVID-19 case in more than two months, a 56-year-old woman who recently returned from Europe, who tested positive for the virus after completing her mandatory hotel quarantine.

Director-General of Health Ashley Bloomfield on Sunday said health authorities were investigating to see whether it was possible the woman caught the disease from another returning traveller who was staying in the same quarantine facility.

New Zealand has eliminated community transmission of the virus, at least for now.

Since leaving quarantine, the woman visited about 30 locations, which were yet to be made public.

We’ll have more on this story as it develops. 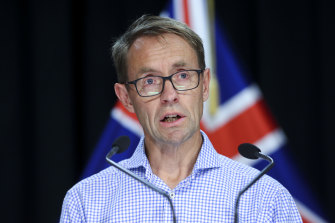 Director-General of Health Dr Ashley Bloomfield speaks to media about the new case of community transmission on Sunday. Credit:Getty Images

Immunisation and technology experts are urging Federal Parliament to pass new laws requiring social media giants to maintain a list of the most viral COVID-19 material to help combat misinformation as Australia prepares to roll out a vaccine.

The Doherty Institute in Melbourne, which has undertaken pivotal research informing Australia’s COVID-19 response, is among several health organisations that have signed an open letter urging politicians to act immediately to demand transparency from companies such as Facebook and Google.

Our full story is here. 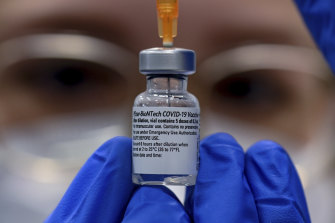 The Morrison government expects the first vaccines from pharmaceutical company Pfizer to arrive in Australia in February.Credit:AP

Rioting youths protesting on the first night of a Dutch curfew torched a coronavirus testing facility and threw fireworks at police in a Dutch fishing village.

Police said on Sunday they fined more than 3600 people nationwide for breaching the curfew that ran from 9pm on Saturday until 4.30am on Sunday.

Video from the village of Urk, 80 kilometres north-east of Amsterdam on Saturday night, showed people breaking into the coronavirus testing facility near the village’s harbour before it was set ablaze. You can read more here.

The incident raises a broader question among scientists: do curfews really work?

The proposal relies on finding a way to link verified COVID-19 vaccine certificates to a new digitised system for incoming passenger cards that the federal government aims to implement later this year. 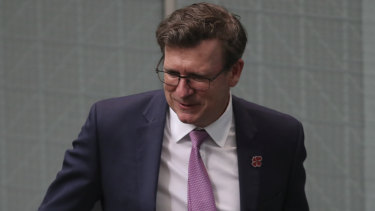 We have the full story here.

Good morning and welcome to our ongoing coverage of the coronavirus pandemic.

My name is Craig Butt and I’ll be running the coronavirus updates blog today. You might remember me from such classic coronavirus live blogs as ‘the day public gatherings were limited to two people’ and ‘the day it was announced that second wave restrictions would ease in Victoria’. It’s been more than two months since I last liveblogged (‘the day the blog wrapped up until the northern beaches outbreak started’), so I hope I’m not too rusty!

As always, if there is something coronavirus-related that you think merits an update on the blog, or if you have something to share, please shoot me an email or leave a comment.

Here’s a quick recap of where we are as we start the day.

Stay with us as we follow these and other stories throughout the day. 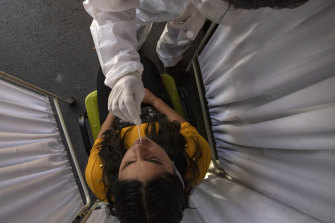 A healthcare worker is tested for coronavirus in a market in Santiago, Chile.Credit:AP