Dozens of councils in Victoria are awaiting a Supreme Court review of a WorkSafe finding that their workplace insurance schemes were not "fit and proper" to continue.

The Municipal Association of Victoria has run its WorkCare Scheme since October 2017 and applied to renew its licence as a self-insurer before its expiry on October 31.

But WorkSafe rejected the application on October 15 in a decision that the MAV wants overturned by a judicial review filed with the Supreme Court last week. 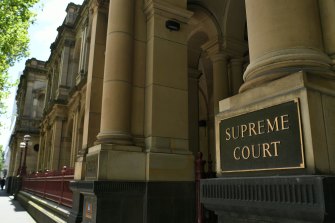 The Supreme Court in Melbourne.Credit:Vince Caligiuri

Self-insurance allows employers and body corporates like the MAV to manage and wear the costs and risks of staff compensation claims.

To be eligible, employers need to demonstrate that their scheme is viable and capable of meeting claims liabilities.

Dozens of local governments have been on the MAV WorkCare insurance scheme, including Port Phillip, Bayside, Wodonga and Dandenong councils.

Port Phillip CEO Peter Smith said the council was still covered by the MAV WorkCare Scheme until the judicial review is finalised.

"MAV has advised members of its WorkCare Scheme that there is no requirement to make any changes to their current workers compensation insurance cover/policy, as the MAV WorkCare Scheme will continue to operate until the judicial review proceeding is determined," Mr Smith said.

"In the event the licence is not renewed, we will explore different suppliers with appropriate terms."

Stonnington Council was previously on the scheme but already planned to move to Employers Mutual Limited and did so on November 1.

WorkSafe — named as the Victorian Workcover Authority in court documents — refused to renew the MAV's licence because "it was not satisfied that MAV is fit and proper to be a self-insurer", according to the motion for review.

In its motion, the MAV accused WorkSafe of failing to provide procedural fairness and properly consider its submissions.

The MAV alleged that WorkSafe erred when it concluded that the scheme "is subject to risk that threaten its future viability" despite being satisfied that the association was currently able to meet its liabilities.

"Further or in the alternative, it was irrational and/or legally unreasonable to do so," it was said in the motion, filed by James Johnson of Sparke Helmore on the MAV's behalf.

It's also alleged that WorkSafe relied on outdated information and wrongly construed the terms and conditions of the licence.

A MAV spokeswoman said the association was disappointed with WorkSafe's decision, but that it would be inappropriate to comment further while the matter is before the courts.

"The MAV is seeking a judicial review of WorkSafe Victoria’s decision to refuse renewal of the MAV’s self-insurance licence," the spokeswoman said.

"We are of course disappointed with WorkSafe's decision as we do not think that it reflects our members’ efforts and positive performance since the MAV WorkCare Scheme commenced in 2017.

"As this matter is now before the courts, it would not be appropriate for us to comment any further on WorkSafe’s decision or the reasons provided."

The most important news, analysis and insights delivered to your inbox at the start and end of each day. Sign up here.

END_OF_DOCUMENT_TOKEN_TO_BE_REPLACED

END_OF_DOCUMENT_TOKEN_TO_BE_REPLACED
Recent Posts
We and our partners use cookies on this site to improve our service, perform analytics, personalize advertising, measure advertising performance, and remember website preferences.Ok