Speaker Nancy Pelosi said that the House would not leave for the November elections without acting on an additional round of aid. Pakistani high schools and universities reopened for the first time in nearly six months.

Here’s what you need to know: 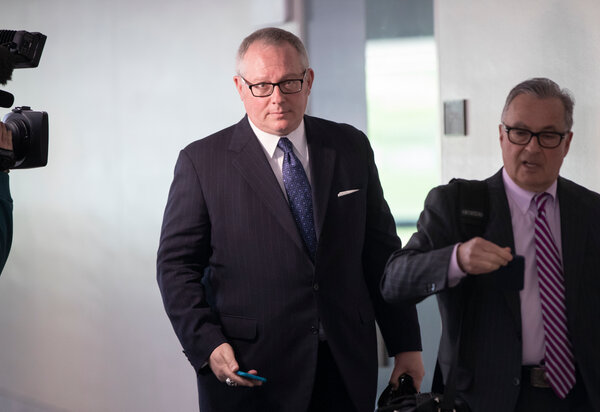 Michael R. Caputo, the assistant secretary of health for public affairs, apologized Tuesday morning to Health Secretary Alex M. Azar II and his staff for a Facebook outburst in which he accused federal scientists working on the pandemic of “sedition” and warned of coming violence from left-wing “hit squads.”

He is considering a leave of absence to address physical health problems, according to one source familiar with the situation.

Mr. Caputo, 58, a longtime Trump loyalist, told staff members in a hastily scheduled meeting that he was under stress because of concerns about his physical health and threats to his safety and that of his family. He said he regretted having embarrassed Mr. Azar and the Health and Human Services department.

Since he was installed at the 80,000-employee department last April by the White House, Mr. Caputo, a media-savvy former Trump campaign aide, has worked aggressively to control the media strategy on pandemic issues. But over the weekend, he was engulfed in two major controversies of his own making.

First Politico, then The New York Times and other media outlets, published accounts of how Mr. Caputo and a top aide, Paul Alexander, had routinely worked to revise, delay or even scuttle the core health bulletins of the Centers for Disease Control and Prevention in an effort to paint the administration’s pandemic response in a more positive light. The C.D.C.’s Morbidity and Mortality Weekly Reports had previously been so thoroughly shielded from political interference that political appointees only saw them just before they were published.

Then on Monday, The Times reported that a Facebook presentation by Mr. Caputo the previous night was filled with bizarre and incendiary comments. He had attacked C.D.C. scientists as anti-Trumpers who had formed a “resistance unit,” engaged in “rotten science” and “haven’t gotten out of their sweatpants” except for coffee shop meetings where they plotted against the president. He urged his gun-owning followers to buy ammunition because “it’s going to be hard to get” and warned that left-wing hit squads across the nation were training for violent attacks. He also referred to physical health concerns and said his mental health “had definitely failed.”

In a statement Monday he said since the spring, he and his family had been continually harassed and threatened, including by some individuals who were later prosecuted.

In other fallout, McMaster University in Canada issued a statement on Monday distancing itself from Dr. Alexander, whom Mr. Caputo hailed to his Facebook followers as a “genius.” He did receive a doctorate from the university, but he is not on the faculty, the university said.

“He is not currently teaching and he is not paid by the university for his contract role as a part-time assistant professor,” a McMaster spokeswoman, Susan Emigh, said in a statement.

“As a consultant, he is not speaking on behalf of McMaster University or the Department of Health Research Methods, Evidence and Impact.”

END_OF_DOCUMENT_TOKEN_TO_BE_REPLACED

END_OF_DOCUMENT_TOKEN_TO_BE_REPLACED
Recent Posts
We and our partners use cookies on this site to improve our service, perform analytics, personalize advertising, measure advertising performance, and remember website preferences.Ok