Covid is killing fewer healthy and under-60s in England now than it did during the first wave of the pandemic in spring, data shows

Coronavirus is killing fewer healthy and younger people in England now than it did during the first wave of the pandemic in spring, analysis shows.

The risk of the virus to people without pre-existing health conditions and those under the age of 60 has always been small, with the disease preying on the elderly and patients with weakened immune systems.

But NHS England figures reveal that threat has become even smaller over time, with experts claiming it is a sign that doctors have become better at treating the virus.

People with no comorbidities made up 5 per cent of 25,080 total Covid deaths in the first wave, defined as from the beginning of the pandemic in March to May 19, according to analysis by The Times.

Whereas healthy Brits with no known health woes accounted for only 3 per cent of the 12,125 Covid deaths in the third wave, between December 2 and January 6.

People under 60 made up 5.9 per cent of virus-attributed deaths during the winter wave, down from 8.7 per cent in the spring. Although the changes have only been by a few per cent, they have potentially saved hundreds of lives.

Simon Clarke, associate professor in cellular microbiology at the University of Reading, told the newspaper: ‘If you think about the number of patients that it is, it’s not necessarily so small’.

The survival chances are thought to be higher now than at the beginning of the Covid pandemic because of the emergence of treatments such as the cheap steroid dexamethasone. Doctors are also more reluctant to put Covid sufferers on ventilators than they were at in spring after it became clear the machines made some patients worse.

However, people with underlying health conditions and those over-60 are still dying to the disease at a similar rate this winter compared to the spring. Professor Clarke said people with compromised immune systems ‘probably don’t respond as well’ to the new therapies.

And the NHS figures show that women and white people now account for a higher proportion of deaths than they did in the first wave. For women the rate has risen from 39 to 43 per cent and for whites it has climbed from 84 to 89 per cent.

Even though healthy and young people appear to have better survival chances now than last spring, it should be noted that the analysis only looked at one month for the third wave, compared to three months for the first.

It is possible that by February, the death rate for people in these categories may climb and match that of the first wave. Professor Andrew Goddard, president of the Royal College of Physicians, said it was ‘too soon’ to draw firm conclusions from the figures.

Meanwhile, those with comorbidities appear to be dying at a slightly higher rate than in spring – making up 96.7 per cent of winter Covid deaths compared to 94.9 per cent of the victims in spring.

A similar story has played out in the over-80s, who have accounted for 58 per cent of the deaths this time around compared to 53 per cent in the first wave.

For those aged between 60 and 79 survival chances have increased. People in this group made up 36 per cent of fatalities in the last month, down from 39 per cent in the spring.

The Times’ analysis also found that men, who have been disproportionately dying the disease, have seen survival rates improve – from 61 per cent to 57 per cent – with women now dying at a higher rate than in spring.

It comes as MailOnline analysis suggested Britain could suffer 120,000 coronavirus deaths by the time ministers can safely ease restrictions because enough of the country has been vaccinated. 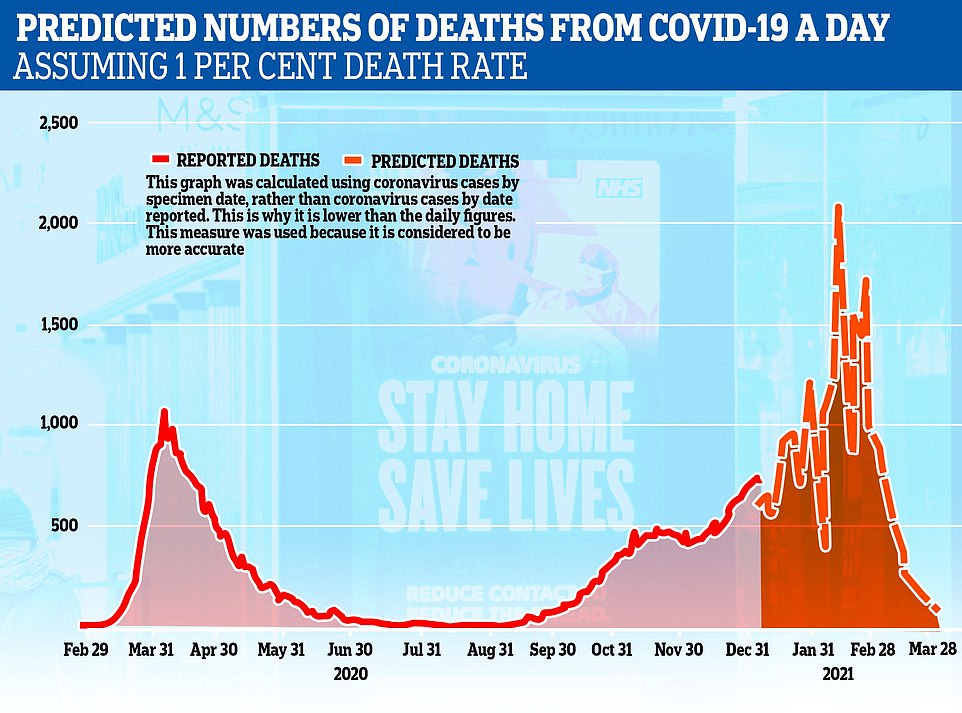 But experts believe another 25,000 deaths are already baked into the tally because of cases that occurred over the last three weeks, which is roughly how long it can take infected patients to become severely ill and succumb to the disease. Whitehall sources fear the figures could hit as high as 2,000 a day. Another 15,000 could die from infections caught between now and the end of February, even if the UK manages to halve the size of its outbreak

Department of Health statistics show the UK’s official Covid death toll currently stands at 82,000 – half of which have occurred since the start of the second wave in September.

But experts believe another 25,000 deaths are already baked into the tally because of cases that occurred over the last three weeks, which is roughly how long it can take infected patients to become severely ill and succumb to the disease. Whitehall sources fear the figures could hit as high as 2,000 a day.

Another 15,000 could die from infections caught between now and the end of February, even if the UK manages to halve the size of its outbreak.

Boris Johnson pledged to vaccinate 13million of Britain’s most vulnerable residents by mid-February, saying that achieving the mammoth goal would allow No10 to ‘lift many of the restrictions we’ve endured for so long’.

But experts say it’s impossible to predict how many people will die by the time the UK has vaccinated millions of the most vulnerable people because no-one knows how well the lockdown will work against the highly-infectious mutation.

Professor Paul Hunter, an infectious diseases expert at the University of East Anglia, told MailOnline: ‘The correct answer is that we don’t really know how many people will die. There’s still a lot of uncertainty with how effective the current lockdowns will be at actually reversing the increase in cases.’ Professor Kevin McConway, a statistician at the Open University, said the suggestion was ‘not a million miles off’.

Fears are growing that restrictions may need to be toughened. The Prime Minister is thought to have discussed the prospect of introducing tougher controls to ensure the public abide by the lockdown, with options including forcing people to wear masks outside.

HOW WAS THE GRAPH OF PREDICTED COVID-19 DEATHS CALCULATED? 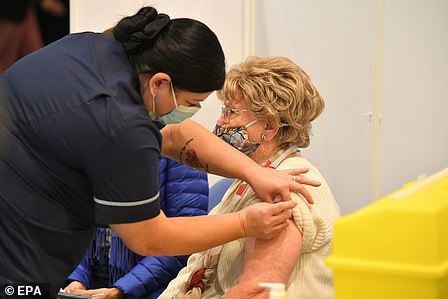 Around one per cent of all those who are infected with Covid-19 die about three weeks  later, according to experts, meaning there is a delay between a drop in infections and a drop in deaths from the virus.

Scientists at Imperial College London – who have studied the pandemic since it first emerged in China – suggested the figure in a study published in October. But it has been disputed by other experts, who suggest that improvements in healthcare may have driven it down to closer to 0.5 per cent.

To calculate the number of Britons that may have died from coronavirus by the middle of February – when Boris Johnson is set to have vaccinated all 13million of the most vulnerable – the time period was broken into two parts.

The first considered the number of deaths triggered by infections caught over the four weeks to January 5, when England’s third lockdown started.

Department of Health statistics show roughly 1million people tested positive for Covid between December 21 and January 9, the day with the most up-to-date numbers. But the Department also says it picks up only around 40 per cent of all cases, meaning the actual number of infections may be closer to 2.5million.

This suggests there may be 25,000 deaths over the first four weeks of lockdown, assuming a death rate at one per cent.

The second time period considered the number of deaths triggered by infections reported in the first two weeks of lockdown. Experts say they will still spiral over the first fortnight because it can take this long for someone who has caught the virus to start showing symptoms and get a positive test – although there may be early signs a dip is approaching.

To estimate the number of deaths over this time, the average number of daily Covid-19 infections over the seven days to January 4 – the latest week available – was used. The 2.1million infections suggested would lead to as many as 21,300 deaths from the virus, assuming one per cent of all those who are infected succumb to the disease.

Although shown on the graph, experts warned it was not clear how quickly deaths would start falling – but that they should reach their peak in the next four to six weeks. There are warnings they could top 2,000 by mid to late January, in what could be the darkest days of the second wave.

In November’s lockdown they had dropped by 27 per cent by the second week, but experts cautioned this could not be used as a comparison because during this shutdown schools were open and the more infectious mutant variant of the virus was not widespread, the opposite of the current lockdown.

Professor Paul Hunter, an infectious diseases expert at the University of East Anglia, told MailOnline: ‘The correct answer is that we don’t really know how many people will die. There’s still a lot of uncertainty with how effective the current lockdowns will be at actually reversing the increase in cases.’

END_OF_DOCUMENT_TOKEN_TO_BE_REPLACED

END_OF_DOCUMENT_TOKEN_TO_BE_REPLACED
Recent Posts
We and our partners use cookies on this site to improve our service, perform analytics, personalize advertising, measure advertising performance, and remember website preferences.Ok