Covid report blasts ministers for failing to lock down sooner

Let down by Sage ‘groupthink’: Report into Covid pandemic blasts ministers for failing to lock down sooner after following flawed advice

Ministers failed to challenge flawed advice from Government scientists which allowed Covid to rip through Britain, the damning inquiry concluded.

Today’s report said the UK’s failure to lock down early enough stemmed from ‘false groupthink’ among members of the Scientific Advisory Group for Emergencies (Sage).

In a devastating verdict, the report insisted the deadly delay in imposing the first national lockdown was ‘because of the official scientific advice the Government received, not in spite of it’.

It added that an ‘over-reliance on specific mathematical models’ – many of which were later proved to be wildly inaccurate – was a key factor in the UK’s disastrous response to Covid.

In the early days of the pandemic Boris Johnson consistently stuck to the mantra that his Government was ‘following the science’. 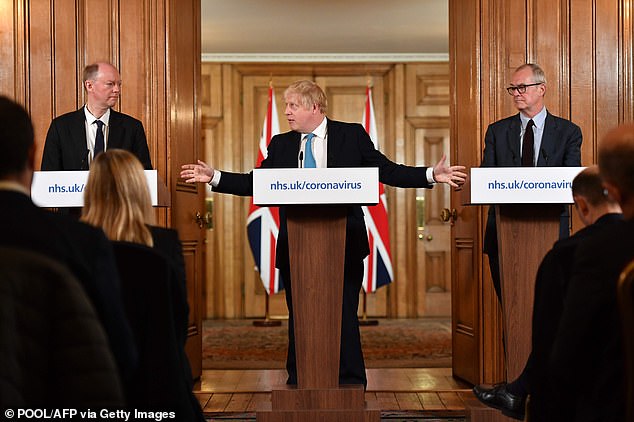 However, the inquiry suggests much of this early advice from Sage was wrong – but ministers ‘felt it was difficult to challenge the views of their official scientific advisers’.

On March 12, 2020, chief scientific adviser Sir Patrick Vallance told a Government news conference it was not possible or desirable to stop everyone being infected.

And at a Sage meeting the next day – ten days before lockdown – members were ‘unanimous that measures seeking to completely suppress spread of Covid-19 will cause a second peak’.

The report said: ‘Modelling at the time suggested that to suppress the spread of Covid-19 too firmly would cause a resurgence when restrictions were lifted.’

It criticised a ‘degree of groupthink’ which meant that ‘during this period Government policy did not deviate from the scientific advice it received in any material respect’.

The report said that in the days leading up to the first lockdown ministers and advisers ‘experienced simultaneous epiphanies that the course the UK was following was wrong, possibly catastrophically so.’

Sage only recommended a full lockdown when a study led by Professor Neil Ferguson, of Imperial College London, said an unmitigated epidemic could result in 510,000 UK deaths.

MPs said it was ‘astonishing’ this had taken so long when most other nations had already imposed stay-at-home orders.

The report also criticised Sage for promoting the idea it would be difficult to persuade Britons to stay at home, noting: ‘It transpired that the UK public were very compliant with the eventual lockdown measures.’

Both former chief aide to the PM, Dominic Cummings, and ex-health secretary Matt Hancock told the inquiry they felt unable to challenge a ‘scientific consensus’ as it became clear a catastrophe was unfolding.

Mr Hancock said: ‘I bitterly regret that I did not over-rule that scientific advice at the start.’ 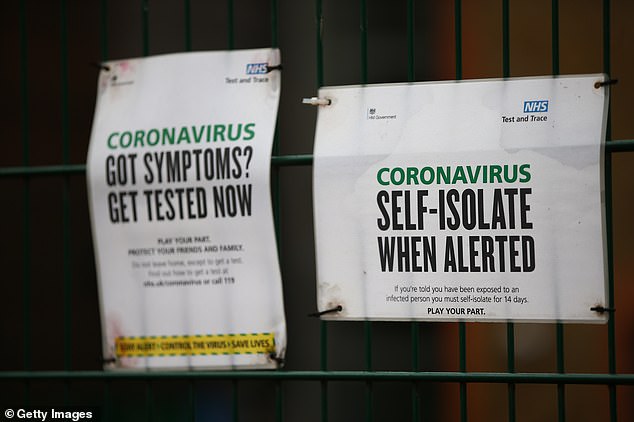 The damning findings of the report also show the UK’s response was also ‘severely hampered’ by the ‘slow, uncertain, and often chaotic performance’ of the test, trace and isolate system. Pictured: warnings in Westminster in January of this year

The report stressed: ‘Science proceeds through challenge and disputation…Yet ministers and other advisers reported that they felt it difficult to challenge the views of their official scientific advisers.

‘Those in Government have a duty to question and probe the assumptions behind any scientific advice given, particularly in a national emergency, but there is little evidence sufficient challenge took place.’

The MPs on the committee were also highly critical of the mathematical models produced by members of Sage.

The inquiry said evidence suggests ‘mathematical modelling was playing too influential a role in UK scientific advice’ as the models came with significant limitations and often failed to take into account real-world observations.

The report noted: ‘Despite this, throughout the pandemic, detailed modelled projections have evidently had great influence on Government decisions.’

Since the pandemic began, members of Sage have been under fire for gloomy predictions which were later proved wrong.

Only last month, they published modelling suggesting there could be between up to 7,000 hospital admissions a day in mid-October. In reality, daily admissions are currently averaging just 736.

Other prominent members of Sage, including Professor Ferguson, also claimed that cases could reach 200,000 a day over summer when cases actually peaked at around 50,000.

Criticising the ‘groupthink’ among members of Sage, the report noted that all but one of the 87 members are from UK institutions.

It said: ‘For a virus that has affected every country in the world and which was experienced first by other countries, it is also right to consider whether our scientific advisory bodies are sufficiently international.’