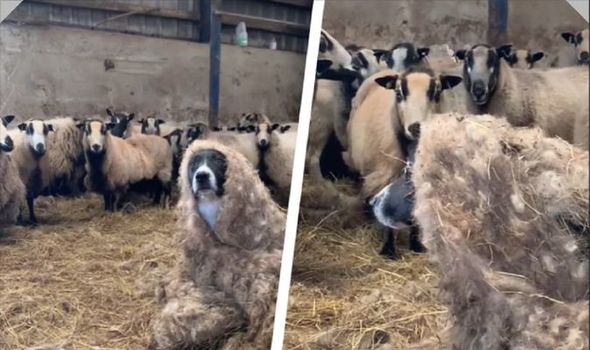 Border Collie disguises itself as a sheep

The breed is known for its slick and stealthy movement, but this dog has taken it to another level. A viral video of the clever canine sees the dog huddled together with a herd of sheep in a crafty disguise. He’s totally concealed as he sits covered in wool next to his farmyard pals, hoping that nobody will notice. In the background to the clip, the audio says: “Nobody’s gonna know. How would they know?” The camera focuses on the collie’s face as the canine con artist does his best to blend in.

One commenter wrote on the clip: “Day 105. I’ve gained their trust and now I’m their leader.” Another added: “Wolf in sheep’s clothing, literally.”

Another joked: “Dog’s like ‘you’re embarrassing me! The sheep ain’t buying it and I look like an old lady that’s never had a hair cut.”

The American Kennel Club says collies are a ‘remarkably bright workaholic’, as they are capable of learning several words, tricks and tasks.

The club adds: “The intelligence, athleticism, and trainability of Borders have a perfect outlet in agility training. Having a job to perform, like agility or herding work is key to Border happiness.”

One Border, named Chaser, became the world’s smartest dog, for her ability to remember more than 1,000 proper nouns – including 30 different balls by name and category. The clever canine passed away in 2019, at the age of 15.

Their intelligence has seen them pick up all manner of tricks.

One of the most impressive to hit the headlines lately was TikTok star Nicolas – an operatic collie who sings every day.

Social media was left stunned after hearing the remarkable range of tones he’s capable of howling out.

Nico belts out powerful renditions as he sits high up on a windowsill, hitting a range of high and low notes.

The dramatic performance was such a hit, the video soon began racking up millions of views and comments full of admiration for the opera star.

Keep up to date with all our TeamDogs news by following our social pages. As well as videos, tips and advice, we’ll also be sharing some of your amazing doggy pictures so follow us on Facebook, Instagram and Twitter.