Prague: Czech President Milos Zeman appointed the leader of a centre-right alliance Petr Fiala as prime minister on Sunday in a ceremony he performed from a plexiglass cubicle after testing positive for COVID-19.

Fiala leads a bloc of five centre and centre-right opposition parties that won an election in October, ousting the incumbent premier Andrej Babis and his allies. 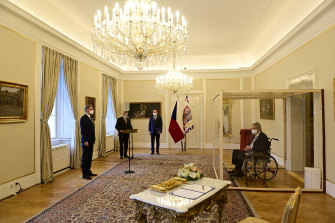 The new government will have to tackle a new wave of coronavirus infections that is threatening to overwhelm hospitals and an energy crisis, after the collapse of a large electricity provider. The coalition has also said it plans to rework the 2022 state budget to reduce a large deficit.

“The new government has a very complicated time ahead and many challenges… I want it to be a government of change for the future,” Fiala said at a news conference.

He expected his cabinet to be appointed in mid-December.

The new prime minister also called on people to get vaccinated against COVID-19 and praised medical staff as cases are on the rise. 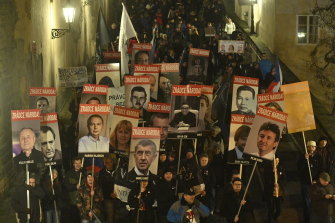 People holding placards protest at a rally in Prague to decry the government’s restrictions on unvaccinated people on November 22.Credit:AP

Opponents of vaccination and government’s anti-coronavirus measures such as a ban on Christmas markets gathered in their thousands in Prague later on Sunday for a protest rally.

The protesters included members and supporters of a number of fringe political parties and groups that failed to win any parliamentary seats in October’s election. It was their third protest in the last two weeks. The participants didn’t wear face coverings or follow social distancing rules and drank beer despite a ban on drinking alcohol in public.

At Prague’s Letna Park, the protesters chanted “Freedom!” and “We’ve had enough!” while displaying banners that discouraged getting vaccinated such as ones reading”My body my choice.”

The country has been setting repeated records in new daily infections, hitting a record high of almost 28,000 cases on Thursday. The infection rate was at 1191 new cases per 100,000 residents over the past seven days. Overall, the nation of 10.7 million has registered over 2.1 million cases with 32,837 COVID-related deaths.

Only 58.5 per cent of Czechs are vaccinated against coronavirus. This compares to a European Union average of 65.8 per cent, according to the European Centre for Disease Prevention and Control.

The Czech government declared a 30-day state of emergency and imposed additional coronavirus restrictions on Friday in its effort to tackle the surge. Among them, all Christmas markets across the country were banned and bars, restaurants, nightclubs, discotheques and casinos have to close at 10 pm. 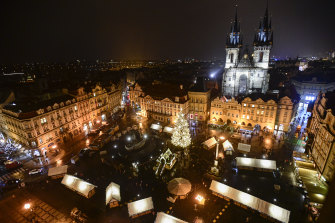 A general view of a Christmas market in Old Town Square in Prague, Czech Republic.Credit:AP

The number of people at cultural and sports events in the Czech Republic is now limited to 1000 who are vaccinated or have recovered from COVID-19 while all other public gatherings can be attended by only up to 100 visitors, down from 1000.

Zeman performed the inauguration ceremony from a plexiglass cubicle after testing positive for coronavirus. Zeman, who arrived in a wheelchair escorted by a medic in full protective gear, contracted the virus after a six-week stay in hospital for an unrelated illness.