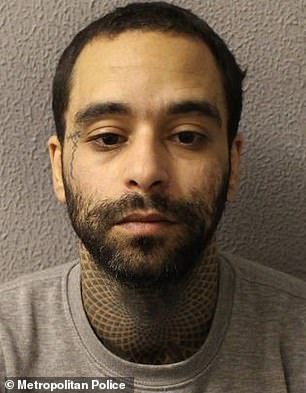 Glenn Brigham (pictured) has been jailed for six years after stashing gun parts at his home in Islington, north London

A disabled man who transformed his home into an arms and drugs factory, stashing guns and bullets at his flat has been jailed.

Glenn Brigham customised his wheelchair so that it could hold a BBM MINIGAP pistol.

The 35-year-old kept the weapon, which fires rubber bullets, down the side of his black mobility wheelchair.

Brigham also kept a fully equipped workshop with drills and lathes at his home in Islington, north London.

Scales, funnels, measuring kits and transparent plastic tubes used for the production of the super-strength cannabis derivative ‘shatter’ were found at his flat alongside an AK47, which had been deactivated.

Officers found the firearm lying next to an African shield and spear and a copy of a book called: ‘The Meaning of the Holy Quran.’

A series of photographs were shown to Southwark Crown Court revealing the cache of pistols and revolvers including Turkish, German and Italian brands.

Police found this cache of weapons at Bigham’s flat in Islington, north London, along with cannabis and a wheelchair customised to hold a pistol 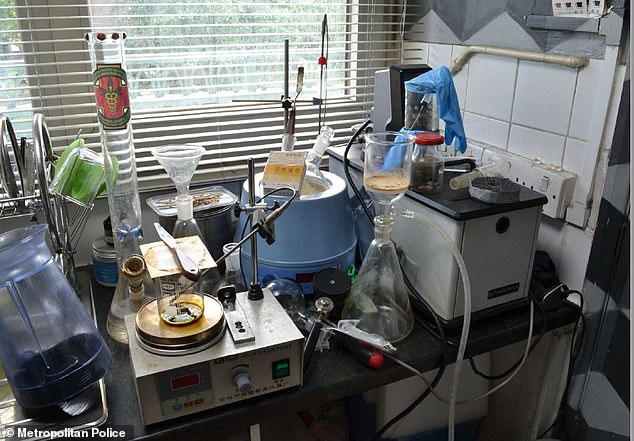 Triston Chaize, prosecuting, explained: ‘At page 55 is the one which was found in a wheelchair. 56 shows the gun wedged in.

‘53 shows the magazine that was in it and it was loaded with blanks at the time. 64 shows was screwed onto the front of the barrel. 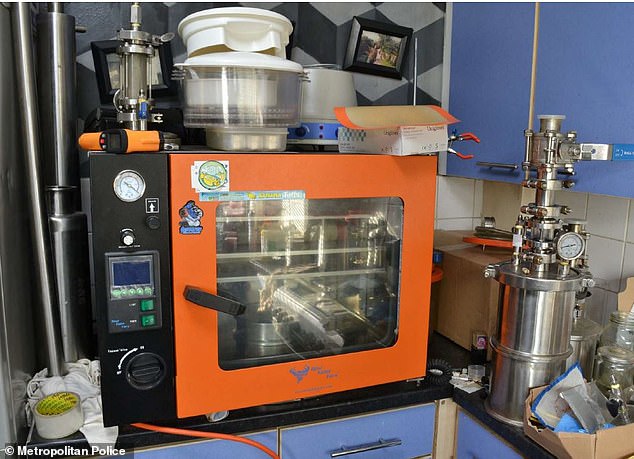 As well as this factory used to create shatter, police found firearms dotted about the flat in Islington, north London

‘What this is, is a device in which you can put a rubber ball and therefore when you fire a blank the gas projects the rubber ball forward.’

Brigham, who has a stich-mark tattoo trailing away from his right eye and ink patterned like a snake’s scales circling round his neck, admitted six counts of possessing a prohibited firearm and two of producing cannabis. Judge Michael Gledhill, QC jailed him for six years.