A WOMAN who was infected with Covid was forced to have three fingers amputated after the disease turned them black.

The 86-year-old, who hasn't been named, tested positive for coronavirus after going to hospital in Italy during the first Covid wave in April last year. 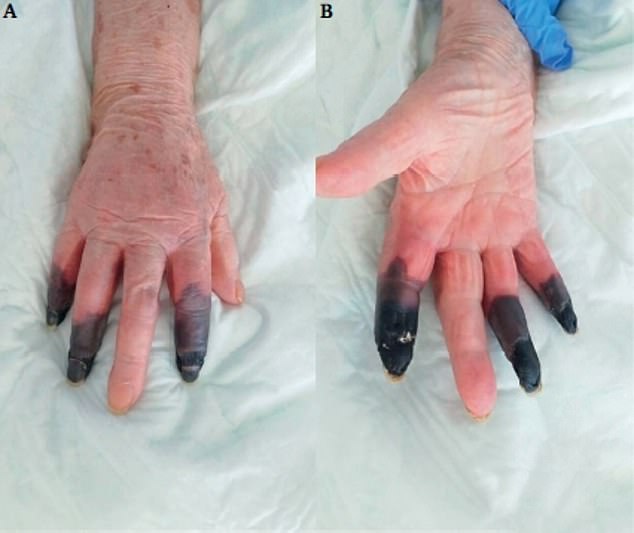 Doctors writing in a case report said she had dry gangrene on the second, fourth and fifth fingers on her right hand.

Also known as necrosis, it's a serious condition where a loss of blood supply causes body tissue to die and turn black.

The woman told doctors she had suffered acute coronary syndrome – where the blood supplied to the heart muscle is suddenly blocked – in March 2020.

She had been prescribed dual anti-platelet therapy to prevent blood clotting, according to their report in the medical journal European Journal of Vascular and Endovascular Surgery.

However, further tests revealed that Covid had caused a blockage in the flow of blood to her fingers and she had suffered necrosis.

Her fingers couldn't be saved and doctors decided to amputate, to prevent any further complications.

In their report, doctors Giuseppe P. Martino and Giuseppina Bitti referred to it as a case of "Covid fingers" and a "severe vascular maifestation".

She's not the only person to have to undergo an amputation after suffering Covid-19.

In December, Lee Mabbatt from Bournemouth, Dorset, had to have his leg removed after developing a life-threatening blood clot, which he was told was triggered by coronavirus.

Doctors have previously warned about the rare side effect – often seen in the toes as well as the fingers – of Covid patients.

Scientists said the bizarre symptom quite often appeared in those who experienced none of the other classic Covid signs such as a cough or fever.

Although the exact cause remains unclear, some put it down to an "inflammatory" response to the virus.

Dr Esther Freeman, a dermatologist at Massachusetts General Hospital, told NBC’s Today programme: “One hypothesis is there’s just a lot of inflammation caused by the virus."

The other theory is that it could be the result of blood vessel clots, she added.

Despite this, she emphasised that people with this symptom should be tested.

Experts at the International League of Dermatological Societies and the American Academy of Dermatology looked specifically at Covid toes.

They found that it usually develops within a week to four weeks of being infected and can cause toes to change colour or become swollen.

Covid toes usually goes away within 15 days but in some cases has lasted as long as four and a half months, according to their findings.

The experts said that most symptoms are mild in the majority of patients and that in most cases the feet return to normal within a few weeks.

Dr Veronique Bataille, a consultant dermatologist at West Hertfordshire NHS Trust and a research fellow at King’s College London, has warned people what to look for.

What are some unusual signs of Covid?

By now, most of us know what to look out for when it comes to Covid symptoms.

But here are some of the more unusual signs of Covid-19:

She said: "A rash may appear on either your fingers or toes which looks a little like chilblains or frostbite.

“It usually appears as reddish or purple-looking bumps at the tops of the toes or on the backs of the fingers.

“The rash can form in little circles and often it feels quite tender.

“In some cases, it is the first sign of infection but in other people we know it appears several months after they had Covid.

"It is more common in children. Usually this is the sort of rash you’d see in the winter but it stuck out at the time as it didn’t quite fit when dermatologists were seeing it back in March and April.

“That’s how we realised it was linked to Covid.”

Experts behind the ZOE Covid Symptom Tracker app have also urged the Government to add skin conditions, such as Covid fingers and toes, to the official symptoms list.

They fear that until its formally recognised as a Covid sign, as many as one in five cases could be missed and allowed to spread.

It comes after they spotted a rise in people reporting the bizarre side-effect to their app.

They found that nine per cent of people who had tested positive for coronavirus also had either a body rash or a rash on their fingers or toes.

Researchers said rashes were twice as common in children as in adults and may be a better predictor of needing a swab test than a fever or cough.

According to the data, rashes may appear before, during or after the presence of other Covid symptoms and sometimes many weeks later.

Rashes were also the only sign of infection for 21 per cent of people with a positive nasal swab.