Densely populated regions on the banks of two main rivers in Uttar Pradesh state are among the worst hit. 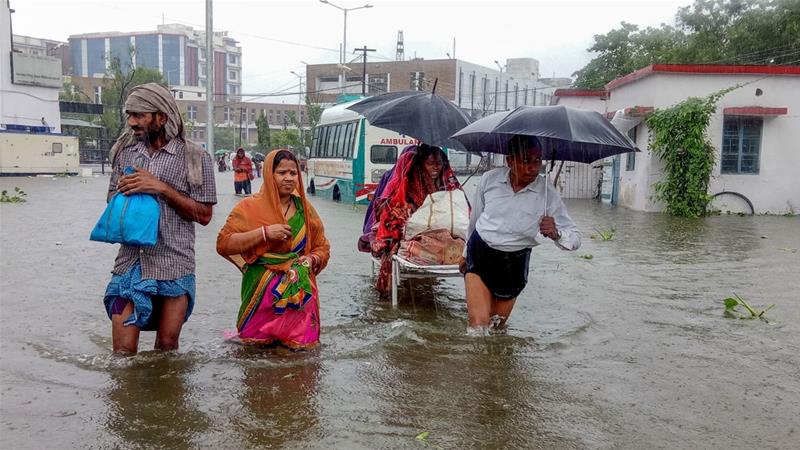 Dozens of people have been killed and thousands moved to relief camps after torrential rains caused flooding in northern India’s Uttar Pradesh state, according to officials.

Densely populated regions on the banks of two main rivers in the state, which are overflowing because of incessant rainfall in the last 24-48 hours, are among the worst hit.

“We had confirmed 44 deaths till late yesterday night. The authorities are focusing on rescue and relief work in the affected regions,” Ravindra Pratap Sahi, vice chairman of the state disaster management authority, told AFP news agency on Saturday.

“We have moved thousands to relief shelters as there is forecast of heavy rains in the next 48 hours in most of the affected districts of the state,” Sahi said.

Sandhaya Kureel, a spokeswoman of the Disaster Management and Relief Department, gave The Associated Press news agency a higher death toll of 59.

Kureel said most of the fatalities were caused by house collapses, lightning and drowning in Uttar Pradesh. At least five people also died of snake bites in flooded areas.

The temple city of Varanasi was lashed by 19cm (seven inches) of rain on Thursday and Friday, flooding the bathing areas of the Ganges River used by thousands of Hindu pilgrims.

Schools were shut on Saturday as the downpour caused disruptions in the state capital, Lucknow, and several towns, including Amethi and Hardoi.

JP Gupta, director of the state meteorological department, said the rain is expected to ebb after Monday.

The Press Trust of India news agency said the western state of Maharashtra was also hit by heavy rain and nearly 3,000 people were moved to higher ground due to flooding in low-lying areas of Pune city and neighbouring areas.

More than 350 people have been killed by rain-related causes in India, Nepal and Bangladesh this monsoon season, which runs from June through September and is crucial to replenishing water supplies.

END_OF_DOCUMENT_TOKEN_TO_BE_REPLACED

END_OF_DOCUMENT_TOKEN_TO_BE_REPLACED
Recent Posts
We and our partners use cookies on this site to improve our service, perform analytics, personalize advertising, measure advertising performance, and remember website preferences.Ok