Addis Ababa, Ethiopia: Survivors of a massacre by rebels in western Ethiopia on Sunday counted 54 bodies in a schoolyard, as Amnesty International reported details of the latest attack in which members of ethnic minorities appear to have been deliberately targeted. 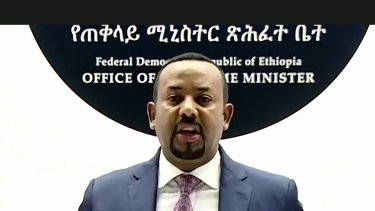 Ethiopian Prime Minister Abiy Ahmed has condemned the attacks, saying the nation’s enemies would control it or destroy it. Credit:UNTV

Ethiopia’s Prime Minister Abiy Ahmed denounced the killing of people based on identity, adding that security forces had been deployed to the area and “started taking measures”.

Ethnic violence in Ethiopia is posing the greatest challenge yet to the prime minister, who was last year’s Nobel Peace Prize winner for his sweeping political reforms.

“Ethiopia’s enemies are vowing either to rule the country or ruin it, and they are doing everything they can to achieve this,” Abiy said in a Facebook post. “One of their tactics is to arm civilians and carry out barbaric attacks based on identity. (For me) this is heartbreaking.”

Ethiopia's government blamed a rebel group, the Oromo Liberation Army, for the attacks in the far western part of Oromia, in an area bordering South Sudan and a few hundred kilometres from the capital, Addis Ababa.

The head of the Oromia region police commission, Ararsa Merdasa, told the state broadcaster the death toll was 32 and “some 200 families have fled the area”.

Survivors of the attack in Guliso District of West Wellega Zone told Amnesty International that federal troops had withdrawn unexpectedly and the rebels arrived hours later, identifying themselves as the OLA and announcing that they now controlled the area.

“Militants gathered people who did not manage to flee, mainly women, children and the elderly, and killed them,” the Amnesty statement said. Survivors hid in a forest nearby. One told the human rights group he found the bodies of his brother, sister-in-law and three children in the schoolyard with bullet wounds.

"The fact that this horrendous incident occurred shortly after government troops abruptly withdrew from the area in unexplained circumstances raises questions that must be answered,” said Amnesty International's regional director Deprose Muchena.

The Ethiopian Human Rights Commission in its own statement noted the government's death toll of 32 but said preliminary evidence it obtained “indicate the number is very likely to exceed that tally”.

Attackers numbered up to 60, the commission said, citing sources. Ethnic Amharas “were dragged from their homes and taken to a school, where they were killed”.

The commission urged the federal government to “shed light on the reasons behind the military’s withdrawal from an area long known to be vulnerable to attacks” and to make sure civilians are protected.

Amharas are the second most populous ethnic group in Ethiopia after Oromos. They also have been targeted by gunmen in the Western Benishangul Gumuz and Southern regions in recent weeks, leaving several dozen dead.

The Oromia region’s communications office in a statement called the latest assault a “brutal terror attack”. Getachew Balcha, the region’s spokesman, said it was aimed at creating havoc and putting psychological pressure on citizens.

“The armed group gathered 200 people for a meeting around 5 p.m., and then started shooting at them,” the Amhara region’s affiliated broadcaster, Amhara Mass Media Agency, quoted one survivor as saying. The survivor said a school and some 120 houses were burned.

“The government has failed in its duty to protect the safety of citizens,” Dessalegn Chanie, a senior member of the opposition National Movement of Amhara party, said, adding that Ethiopia’s language-based federal system is the main cause for the killings: “Ethnic Amharas residing outside of the Amhara region are being labeled as outsiders and are exposed to repeated attacks.”

The Oromo Liberation Army hasn’t commented on the attack allegations. It has denied similar reports in the past.

The rebel group, a splinter wing of the Oromo Liberation Front party, has used the western Oromia region as its base since its members returned to Ethiopia after Abiy shortly after taking office in 2018 invited once-banned groups to return home from exile.

END_OF_DOCUMENT_TOKEN_TO_BE_REPLACED

END_OF_DOCUMENT_TOKEN_TO_BE_REPLACED
Recent Posts
We and our partners use cookies on this site to improve our service, perform analytics, personalize advertising, measure advertising performance, and remember website preferences.Ok