Drink up, Japan urges its young and sober citizens

Tokyo: Among the casualties of the pandemic is one that many young people in Japan say they do not miss: the drinking culture.

Sobriety, they have decided after two years of less socialising and nightcrawling, has its advantages. And that’s why a new message from the Japanese government — drink up! — seems to be putting few in the spirit.

To bolster its ailing alcohol industry, Japan’s National Tax Agency has kicked off a contest inviting those ages 20 to 39 to submit ideas for encouraging people to consume more alcohol. It named the project after the national beverage: “Sake Viva!” 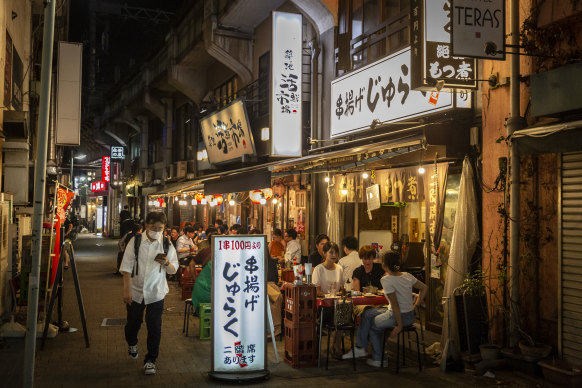 People enjoy drinks and foods at Japanese bar in Ueno area in Tokyo, Japan. But it’s not enough for the industry. Credit:Getty

The agency says it hopes to “revitalise the industry” with the contest, whose winner is to be selected in a tournament later this year. But its entreaty is clashing with more than two years of actions by the government, which discouraged alcohol sales at restaurants and bars and put up signs forbidding drinking in parks and in the streets.

With Japan reaching new highs in coronavirus infections, including more than 255,000 new cases on Thursday, many young people are wondering why the government is now saying it’s OK to go out and drink.

“The media is announcing record COVID cases, while restaurants are like, don’t talk while eating, wear a mask,” said Chika Kato, a 27-year-old consultant in Tokyo. “But the government is at the same time asking us to go all out and drink.” 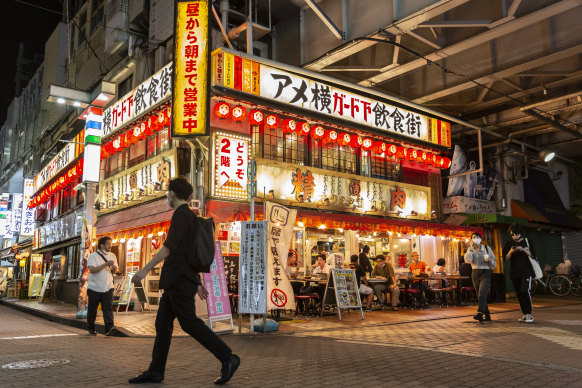 “It’s an awkward situation,” she added. “Who do I listen to?”

To some, any official encouragement to drink — pandemic or not — is a bad idea.

“I don’t think it is a good thing to make people who don’t drink, drink,” said Mima Matsumaru, 25, who works in advertising.

After using the pandemic as a chance to stop drinking, she said she didn’t miss it very much anyway.

None of the Japanese distillers have signed on to the initiative. But bar owners praised it. In Ginza, one of Tokyo’s popular nightlife districts, the pubs remained dimly lit and mostly quiet Thursday night.

“I hope this helps Ginza come alive again,” said Kenta Kobayashi, 34, a bartender who has seen a drastic drop in sales since the pandemic began.

In the United States, state and local governments collected $US 7.7 billion in alcohol taxes, or 0.2 per cent of general revenue, in 2019, according to the Urban Institute.

Under the Japan tax agency’s contest, participants may propose new products and designs targeting young people, even sales techniques involving artificial intelligence or the metaverse. As long as submissions are written in Japanese, they may come from anywhere. The winning entry will be commercialised.

The contest’s organisers said that overindulgence was not the goal, adding that people should drink only “the appropriate amount” and take “common sense” measures against contracting the virus.

“We are in no way promoting excessive drinking among young people,” said Ryo Tsukamoto, a spokesman for the agency’s alcohol tax division.

But critics worried about unintended consequences. Hidetomi Tanaka, an economist, called the effort an “irresponsible and unorthodox drinking campaign.” About 1 million Japanese suffer from alcoholism, while about 9.8 million others are potentially addicted, according to research by the Japanese Health Ministry.

Worldwide, the pandemic has brought down alcohol consumption among younger adults. In South Korea, consumption of soju dropped by 14 per cent from 2019 to 2020 and beer consumption by 23 per cent, leading to the nation’s lowest revenue in alcohol taxes in 10 years. In the United States, the prevalence of binge drinking among young adults surveyed dropped to 26 per cent in 2020, after remaining at about 30 per cent from 2015 to 2019, a study showed.

Neither country’s government has gone as far as to promote drinking. In France, though, lawmakers once considered promoting wine consumption when wine exports and domestic sales fell off the table in 2004. Included in their recommendations was a program encouraging young people to “educate their tastes”.