Drug-crazed thug attacks policeman with a knife in terrifying struggle 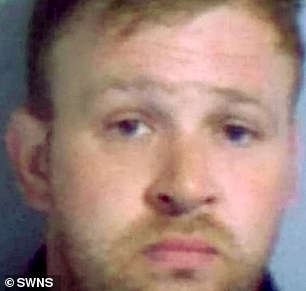 Sean Higgins, 40, was jailed for nine years after a jury found him guilty of attempted wounding with intent to cause grievous bodily harm for the terrifying attack – after he called police to his home

Shocking body-worn camera footage shows the terrifying moment a police officer was nearly stabbed as he grappled with a drug-crazed knifeman.

Sean Higgins, 40, was jailed for nine years after a jury found him guilty of attempted wounding with intent to cause grievous bodily harm for the terrifying attack – after he called police to his home.

And despite the violent attack the officer walked away with just a ‘paper-cut’ to the hand.

It was said Higgins made a 999 call to police saying someone was in his back garden near Ashford in Kent on June 1 last year.

But when PC Stride and another colleague arrived at the house Higgins, who was high on cocaine, began to attack his TV with a knife.

When PC Stride intervened he turned the knife on him.

During the struggle, the knife was said to have been repeatedly ‘aimed’ at PC Stride before his colleague returned and Higgins was restrained.

The incident lasted roughly two minutes, the court heard, which ‘seemed like a lifetime’.

The ground worker, who has a previous conviction in 2003 for wounding with intent, suffers mental health problems dating back to the age of seven and has been diagnosed with paranoid schizophrenia.

He was said to be having a psychotic episode at the time, exacerbated by cocaine abuse and failure to take his prescribed medication.

Jailing him, Judge Philip Statman said: ‘That period of two minutes seemed like a lifetime to him.

‘He thought there was a real prospect that he was going to die and he would never see his wife again. As a result he has suffered considerably although happily he is now back at work.

‘But it is clear to me that that which he went through will remain with him for many years into the future.

‘That officer had to defend himself in the best tradition of British policing but he also had a care for you, Sean Higgins.

‘He sought as best he could to make sure no harm would come to you and, as I commented on an earlier occasion, this showed immense skill on his behalf and consummate bravery.’

Higgins, of Singleton, Kent, was jailed for nine years and will serve an additional three years on licence after being deemed a danger to society by the judge.