‘It was all me!’ BBC journalist Emily Maitlis defends ex-Trump communications director Anthony Scaramucci over his notorious ‘handsy’ interview with her and says she was holding his hand so tightly that he couldn’t leave

Emily Maitlis has defended Donald Trump’s former communications director for his notorious ‘handsy’ interview with her by claiming ‘it was all me’.

The BBC journalist said that despite allegations Anthony Scaramucci had been ‘disgusting’ and inappropriate with her she was actually responsible for the physical contact.

She explained that the 2017 interview had been a spur of the moment arrangement made when she approached him just moments before they went live on air from the US.

As a result, she said, she decided to hold onto him to stop him from walking away from the broadcast for BBC’s Newsnight. 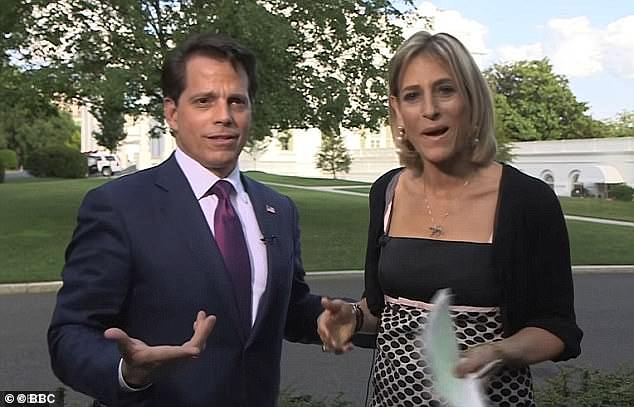 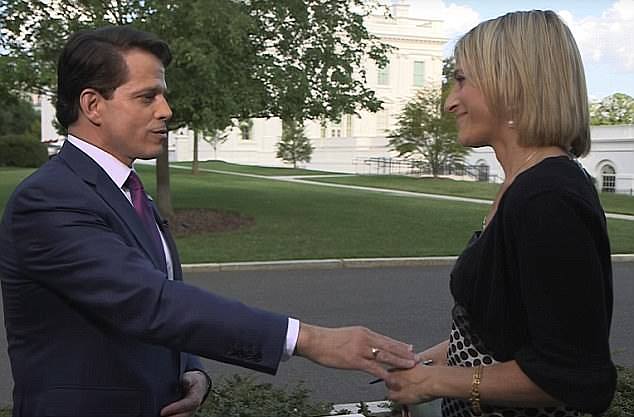 During the course of the spontaneous interview Scaramucci – who was Trump’s director of communications for just ten days before he was sacked – continued to come out with ‘amazing’ lines about the President.

Miss Maitlis said that following the bizarre interview she received a text from her editor that simply said: ‘holy s***’.

Recalling the unusual interview to an audience at Hay Festival, Miss Maitlis said: ‘As we’re gearing up and ready to go on air my cameraman is looking through the lens and sharpening it up and making sure the lighting is right, he suddenly veers away from me.

‘It was the most imperious thing I’ve ever done in my life and I just, my lovely producer who was standing there, Mia, and I just said “Mia, get him!”

‘I looked at Jack and said I can’t believe I’ve just done that, I’ve just ordered a producer, we’ve got to go together haven’t we. 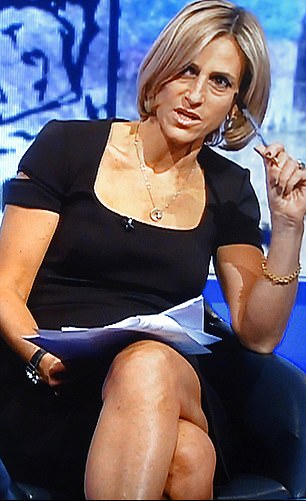 ‘And I took my earpiece out which was quite a brave moment because we were on air at the time and I said to Jack you know what let’s just try it.

‘I took my earpiece off and I un-mic and you have to start threading things through jeans and so-on.

‘And Mia and I together ran off like a sort of couple of Botticelli angels and said ‘hello, you’ve got to do Newsnight.’

‘To his credit he didn’t really ask who we were or what we were or what questions and I remember grabbing his hand and leading him back and we mic him up before he could say no it was like handcuffs, it’s literally the television equivalent of handcuffs.

‘What was weird actually was during that broadcast when we were on air a lot of people had been noticing how handsy he was. “Omg he’s so touchy, it’s disgusting, what is he doing?”

‘They didn’t realise it was all me. I was holding his hand so tightly that he couldn’t leave. It was me.

‘I just thought if I brought him here and he’s mic-ed up and I hold him quite tightly then maybe he’ll just keep talking to me.

‘He came out with all these amazing lines about Donald Trump.’ 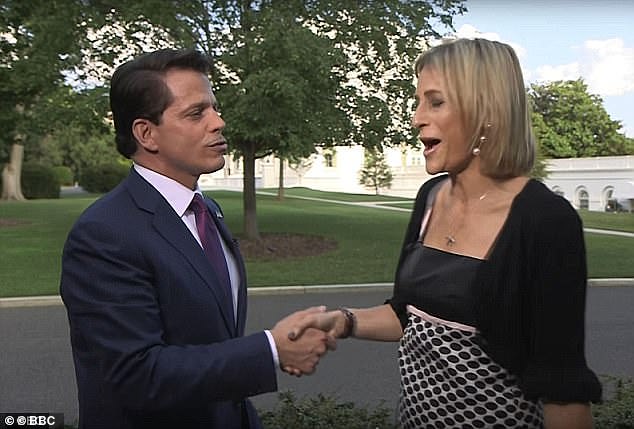 Miss Maitlis had been running a story about chlorinated chicken and grabbed Scaramucci for a comment after they failed to get the opportunity to ask a question during a White House briefing.

While live on air Scaramucci told the journalist: ‘I have no idea what’s going on with chlorine-rinsed chicken, so even to pretend and make something up to you…I’m just not going to do that, OK?’

He went on to accuse Miss Maitlis of being ‘elitist’ and went on to claim that Trump’s love of hamburgers and pizza made him a ‘man of the people’.

Miss Maitlis said following the bizarre episode of the BBC 2 show, the editors went off to ‘lie in a dark room’.