Victoria’s business lobby says the joint federal-state lockdown rescue package announced on Friday will cover every worker and business affected by the latest shutdown, right across the state.

But pressure is growing from regional businesses who must keep their doors closed despite being far away from known COVID-19 cases or exposure sites.

Employees who have been stood down as a result of the state’s fifth lockdown, which began at midnight on Thursday, can claim a weekly payment of $600 or $375, to partially cover lost wages from the beginning of the lockdown regardless of where they live. 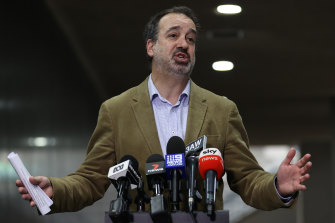 Businesses affected by the shutdown can claim $3000, for pubs and other hospitality venues, or $2000 for other businesses as part of a $200 million extension of the state’s business support package rushed out during the two-week May-June lockdown which has now paid out $413 million.

In a deal hammered out between Premier Dan Andrews and Prime Minister Scott Morrison on Thursday, the Commonwealth will fund the COVID Disaster Payments for workers in Melbourne, Geelong and Surf Coast which are all federally designated hotspots.

The state will cover the cost of paying stood-down workers in the rest of the state, but all claims should be made to Services Australia (Centrelink), with the federal government to send a bill to the state for payments made into the non-hotspot regions.

State Industry Minister Martin Pakula said on Friday the 86,000 businesses that had qualified for payments for the May-June lockdown would be eligible without going through the application process, which had attracted criticism for being slow and bureaucratic.

The payments are only open to operations turning over more than $75,000 — the threshold for GST registration — but the Premier said on Friday that businesses operators and sole traders below the GST cut-off could claim the COVID Disaster Payments.

Victorian Chamber of Commerce and Industry chief executive Paul Guerra said the co-operation between the state and federal governments in the speedy announcement of the package was “really pleasing” after angry exchanges between the Premier, Prime Minister and federal Treasurer Josh Frydenberg this week.

“Today, it felt like a package that was designed for Victorian businesses and workers,” Mr Guerra said.

“We’re confident that with today’s announcement, every business and every worker will be covered.”

But Mildura businessman Liam Wood just wants to be able to open his three venues in the north-west Victorian town where the 40 employees of his shuttered bar, nightclub and a bar will be stood down this weekend.

“Frustration is turning to despair,” Mr Wood told The Age.

“We haven’t had a [COVID] case here in 18 months so we’re just asking ourselves why we keep getting locked down.”

Mr Wood, who also sits on Mildura Council, benefited from $7000 from the first round of business grants paid last week, but said this weekend alone the closures would mean the loss of takings of up to $100,000. He said what local businesses wanted more than government support was the ability to open their doors.

Mr Andrews said on Friday that he understood the frustration from the regions, and that the government would allow non-metro areas to open up when the health advice allowed.

“If I get advice that says right, they can open up, we will do that,” the Premier said.

“But I don’t have that advice, yet it’s too early.”