Father killed by BMW driver who was blinded by flash, inquest hears

Driver who flashed her lights as a warning accidentally blinded another motorist who ran over and killed 62-year-old pedestrian, inquest hears

A driver who flashed her lights as a warning that a man had fallen in the road accidentally blinded another motorist who then ran over and killed the pedestrian.

Retired merchant navy captain Keith Wrightson, 62, was walking home with his son from a football match when tragedy struck.

Driver Danielle Fardoe saw him fall and flashed her lights to warn oncoming drivers that there was danger ahead.

But a court heard a BMW driver hit Mr Wrightson after being blinded by Ms Fardoe’s flashing lights which meant he did not see the 62-year-old until it was too late.

Mr Wrightson died from massive chest injuries in front of his distraught son who had tried to stop traffic by waving frantically and shouting seconds before his father was run over.

Son Luke Wrightson, also in the merchant navy, told a coroner he and his father had been with friends and relatives watching Scarborough Athletic, visiting pubs in the town before and after the game.

Luke Wrightson told the inquest into his father’s death: ‘Dad was just ahead of me when he lost his footing and started to stagger towards the road. I tried to stop him but unfortunately I was not able to.

‘He went down onto the road lying perpendicular across the road with his head to the centre of the road. 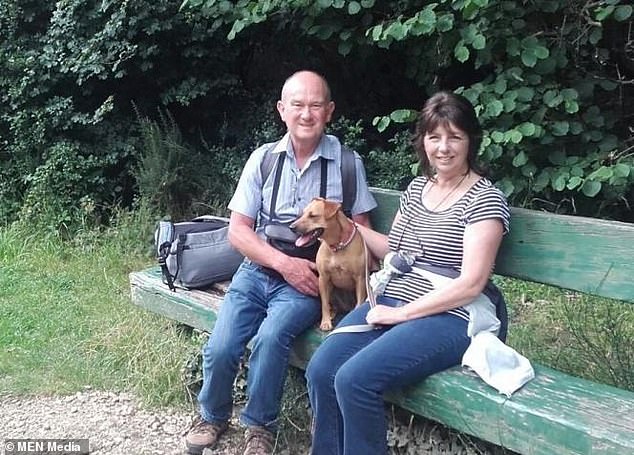 Keith Wrightson (pictured with wife Gill) died when he was run over by a BMW after he tripped in the road on the way back from a football match with his son, an inquest into his death heard

‘I cannot remember his exact position, whether he was on his back or not at the point he fell. I went to try to help him, trying to get him up so I was above him, slightly crouched.

‘I saw lights and noticed a car coming and at this point I was not overly concerned. I was aware the danger was there and thought I would signal the car, waving my arms as it approached.

Much-loved husband and father: ‘I knew I loved him but didn’t know how much until I lost him this tragic way’

Bradford-born Mr Wrightson, a Scarborough fan, joined the merchant navy in 1975 and travelled the world, rising to the rank of captain.

He died just weeks before the birth of his granddaughter, to the heartbreak of his daughter Kirsty.

In a statement read to the hearing by Kirsty, Mr Wrightson’s widow Gill, said: ‘We loved each other dearly and I thought we would grow old together.

‘I am heartbroken. I knew I loved him but didn’t know how much until I lost him in such a tragic way.

‘The impact of losing Keith has been immeasurable for me and our family and friends. I especially worry about our son Luke because he saw his father killed.’

‘I realised the car was not going to stop. I started panicking, shouting ‘stop’ among other things but it became clear to me that it was too late and I had to get out of the way.

‘At the last minute I dived towards the pavement and the grass. I’m not sure but I think my trailing leg was caught by the car.

‘When I gathered myself after the car had gone past, I was looking for my dad.

‘I had heard a bang as it happened. From what I remember I proceeded around the back end of the car and then looked underneath it and saw my dad, who was bleeding and unresponsive.

‘For what it is worth, even though I’m not a medical professional, I was 99 per cent sure he was dead.’

Teacher Danielle Fardoe saw Mr Wrightson fall in her rearview mirror and flashed her lights to warn oncoming drivers of the danger to the 62-year-old.

However her well-meaning actions may have caused a phenomenon known as ‘disability glare’ in oncoming driver Vignesh Chandrasekar, the inquest heard.

The 40-year-old businessman said he was ‘blindsided’ by the flashing and ploughed over Mr Wrightson in his BMW X1 – even though his son Luke Wrightson, 33, was standing in front of his father, waving frantically.

Mr Chandrasekar told the inquest in Northallerton, North Yorks, that he didn’t see Luke and by the time he saw Mr Wrighton lying in the road in Scarborough it was too late to stop.

Luke Wrightson was distraught at the scene as a driver and local resident brought jacks to try to lift the car from Mr Wrightson. He was heard to be screaming: ‘Dad, Dad, he’s dead, he’s gone.’

Their efforts were in vain, with a forensic pathologist telling the hearing she believed he was killed outright by the impact of the collision, which caused the fatal chest injuries and 49 rib fractures. 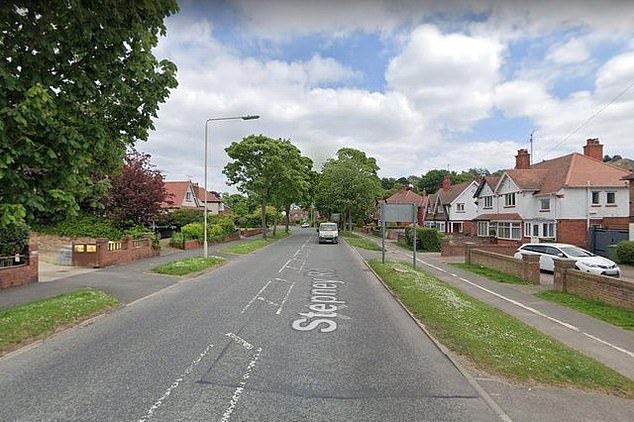 The BMW driver which struck Keith Wrightson said he was ‘blindsided’ by another motorist flashing lights to warn him and did not see the retired seaman, 62, who had fallen in the road

Mr Chandrasekar was questioned by the Wrightson family’s lawyer Dominic Adamson, QC, as to why he had been unable to stop when a driver was flashing her lights to warn him and Luke Wrightson, who was wearing a light-coloured coat, was waving in the road.

He told the hearing that Miss Fardoe’s flashing lights had temporarily ‘blind-sided’ him.

Mr Chandrasekar said she flashed them once, then ‘frantically’ then a steady full beam.

He said: ‘A single flash turned to frantic flashing. I was puzzled as to why that might be. I looked at the controls of my vehicle, including my lights in case they were on full beam.

‘I also checked for warning lights in case there was something wrong with my vehicle.’

He said it passed through his mind that he may have been the victim of a prank or even a criminal attempt to cause a crash and force a fraudulent insurance claim.

Mr Adamson asked him: ‘Did you see Luke Wrightson waving his arms?’

Mr Chandrasekar said he recalled seeing Mr Wrightson Sr lying in the road, moments before his car went over him.

Mr Adamson said: ‘The family is struggling with understanding how it is that you did not see Mr Wrightson standing in between you and the deceased, waving his arms frantically at you and yet you could see the deceased on the ground.’

He replied: ‘That is the first view I had, I can only give you what I have seen.’

Police accident investigator Sgt Ken Riley told the inquest that Mr Chandrasekar was likely to have been affected by ‘disability glare’ a phenomenon that can be caused by bright oncoming headlights.

He said studies had shown the average eyesight recovery time was between three and five seconds for drivers.

However because it was not known exactly where Miss Fardoe’s car was in relation to the prone Mr Wrightson, it was not possible to say conclusively the impact it had on the collision.

Assistant coroner John Broadbridge adjourned the hearing until December 6 when it is expected to conclude.