Nashville: Federal investigators have identified a person of interest in connection with the explosion that rocked downtown Nashville on Christmas Day and were searching a home associated with that person, law enforcement officials say.

Investigators from multiple federal and local law enforcement agencies were at a home in Antioch, in suburban Nashville, after receiving information relevant to the investigation, said FBI Special Agent Jason Pack. Another law enforcement official, who was not authorised to discuss an ongoing investigation but spoke on condition of anonymity, said investigators regard a person associated with the property as a person of interest in the bombing. 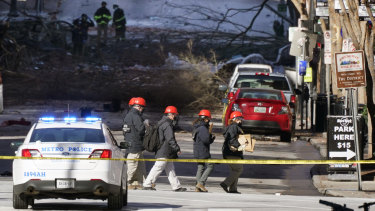 Investigators walk near the scene of an explosion at Nashville, Tennessee. The explosion that shook the largely deserted streets of downtown Nashville early Christmas morning.Credit:AP Photo/Mark Humphrey

Earlier Saturday, investigators said at a news conference they were looking at a number of individuals who may be connected to the bombing but have also found no additional explosive devices- indicating no active threat to the area.

Douglas Korneski, the special agent in charge of the FBI’s Memphis field office, said 250 agents, analysts and FBI staff working the case were making progress in the search for the person or people responsible for planting a bomb in a recreational vehicle that exploded along a mostly deserted street. Three people were injured.

“It’s just going to take us some time,” he said. “Our investigative team is turning over every stone to understand who did this and why."

Separately, the Federal Emergency Management Agency said in a report on Saturday that tissue samples found at the scene were determined to be human remains. 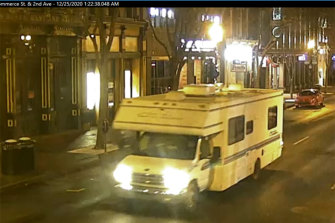 This image taken from surveillance video provided by Metro Nashville PD shows a recreational vehicle that was involved in a blast on Christmas day in Nashville. Credit:AP

The attack that continued to wreak havoc on communications systems across the state. Police emergency systems in Tennessee, Kentucky and Alabama, as well as Nashville’s COVID-19 community hotline and a handful of hospital systems remained out of service because of the blast.

Investigators shut down the heart of downtown Nashville’s tourist scene – an area packed with honky-tonks, restaurants and shops – as they shuffled through broken glass and damaged buildings to learn more about the explosion.

Mayor John Cooper has enforced a curfew in the downtown area until Sunday via executive order to limit public access to the area.

Governor Bill Lee asked the White House on Saturday for federal assistance due to the “severity and magnitude” of the explosion’s impact. At least 41 buildings were damaged, and communications systems — including residential and cell phone service and 911 call centres — failed across the state, he said. Kentucky and northern Alabama were also affected, he said.

Ray Neville, president of technology at T-Mobile, said on Twitter that service disruptions affected Louisville, Nashville, Knoxville, Birmingham and Atlanta. “We continue to see service interruptions in these areas following yesterday’s explosion. Restoration efforts continue around the clock & we will keep you updated on progress,” he said in a tweet on Saturday.

END_OF_DOCUMENT_TOKEN_TO_BE_REPLACED

END_OF_DOCUMENT_TOKEN_TO_BE_REPLACED
Recent Posts
We and our partners use cookies on this site to improve our service, perform analytics, personalize advertising, measure advertising performance, and remember website preferences.Ok